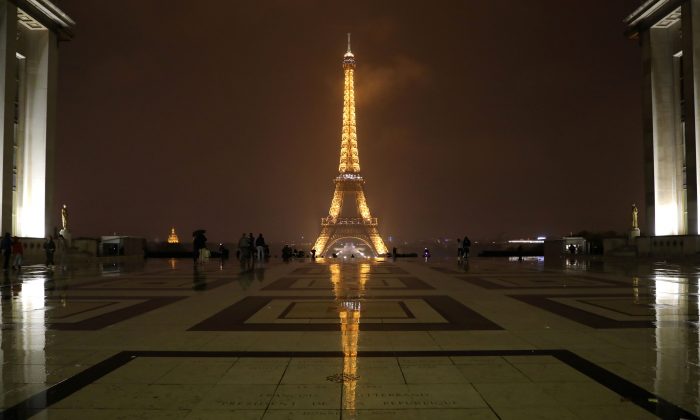 The Eiffel Tower is pictured in Paris before switching off lights on Oct. 2, 2017, in tribute to the victims of the attacks in Las Vegas and Marseille. On Oct. 1, a man knifed two young women to death outside the main train station in Marseille, France's second-biggest city. The ISIS terror group claimed responsibility for the attack via the jihadists' propaganda outlet Amaq, which said was carried out by its "soldiers". It did not provide any evidence for either claim. (LUDOVIC MARIN/AFP/Getty Images)
US News

An ISIS affiliate that threatened “more bitter and greater” attacks in New York published a poster warning the West that more attacks, aimed at children, are on the way.

The poster shows an image of the Eiffel Tower merged with a photo of an AK-47 assault rifle. Monday, Nov. 13, is the two-year anniversary of a series of deadly terrorist attacks in Paris which left 130 people dead.

The text on the poster reads, “You will pay very expensive price for your war on Islam.”

“We will take revenge for the blood of Muslims on your land, we will kill the young before the older watch this,” reports PJ Media.

After the attack in New York’s Central Park, which killed nine, Wafa’ threatened “more bitter and greater” attacks and released a poster titled “Manhattan,” which shows a semi-truck in front of burning skyscrapers with a masked terrorist holding a rifle standing next to the truck.

The text on that poster said, “O worshippers of the cross in USA. Our lone wolves will come to you from where you do not know and we will terrorize you wherever you are and we will show you multitudes of terror and pain that you showed to the Muslims, and what is coming is more bitter and greater,” PJ Media reported.

The same media group has published posters warning of attacks during the 2018 soccer World Cup, which will be played in Russia from June 14 to July 15, with the final taking place at the Luzhniki Stadium in Moscow.

Soccer fans from around the world will flock to Russia to see their national teams play. More than 3.3 million people attended the various 2014 World Cup matches, with a maximum single-game crowd of 74,738 and an average crowd of 53,882 per match, according to ESPN.

With 64 games scheduled in those four-and-a-half weeks at stadiums in 11 different cities—Ekaterinburg, Sochi, Saint Petersburg, Samara, Rostov-on-Don, Kazan, Kaliningrad, Volgograd, and Nizhny Novgorod—there will be many opportunities for terrorists to strike.

One poster tweeted out by extremist monitor SITE Intel Group featured soccer star Lionel Messi behind bars, with a bloody tear falling from his left eye. The image shows the player in a prison uniform and behind bars along with the text: “Just Terrorism—You are fighting a state that does not have failure in its dictionary.”

Another poster, shown in on the British site, The Sun, shows soccer star Cristiano Ronaldo kneeling in front of a masked terrorist wielding a knife, signifying a possible beheading, with a version of the World Cup logo broken in half.

Yet another also shows a kneeling soccer star, with a caption saying “Marco Asensio is Zionis” and the text “Woe to you O crusaders and Jews. Every time you get invigorated, bounce back and flabbergasted and sought refuge in them, Allah reigned on you during the least expect it and will be punished as this is what Allah has promised and He does not break His promise,” as shown on terrorist watchdog website SITE.

Another poster shows a soccer ball on the field of a huge stadium with a bomb inside.

A third shows a terrorist in camouflage looking over s soccer stadium with the text, “Enemies of Allah in Russia, I swear that the mujahideen’s fire will burn you. Just you wait—” As Metro UK notes, this poster features the official World Cup logo.