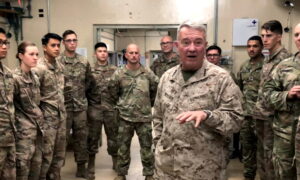 A fighter from ISIS takes position in a destroyed in Damascus, Syria, on Sept. 22, 2014. (Rami Al-Sayed/AFP/Getty Images)
Middle East

ISIS Forced Out al-Baghdadi Town by Iraqi Army, US Airstrikes

ISIS was pushed out of the Iraqi town of al-Baghdadi by the Iraqi army, aided by U.S. airstrikes, according to reports on Friday.

The U.S.-led Combined Joint Task Force issued a statement, confirming the development. It said that with the help of coalition airstrikes, Iraqi and tribal forces in Anbar province have successfully cleared Al Baghdadi of ISIL,” said Jeff Seldin ‏with Voice of America on Twitter. ISIL is another name for ISIS, the Islamic State in Iraq and Syria.

A few weeks ago, the town was captured by ISIS. It’s located near an air base that houses a few hundred U.S. Marines.

Meanwhile, ISIS’ rampage through the ancient city of Nimrud in northern Iraq is an act of “cultural cleansing” that amounts to a war crime, and some of the site’s large statues have already been trucked away for possible illicit trafficking, the head of the U.N.’s cultural agency said Friday.

In The Associated Press, UNESCO Director-General Irina Bokova described her angry reaction to Thursday’s attack that came just a week after video showed Islamic State militants with sledgehammers destroying ancient artifacts at a museum in Mosul.

“We call this cultural cleansing because unfortunately, we see an acceleration of this destruction of heritage as deliberate warfare,” Bokova said. She said the attack fit into a larger “appalling vision” of persecution of minorities in the region and declared that attacks on culture are now a security concern.

Bokova said U.N. officials have to rely on satellite images of the destroyed city to assess the level of damage, because the dangerous security situation makes it impossible to get people close to the site.

But she said officials have seen images of some of the large statues from the site “put on big trucks and we don’t know where they are, possibly for illicit trafficking.”