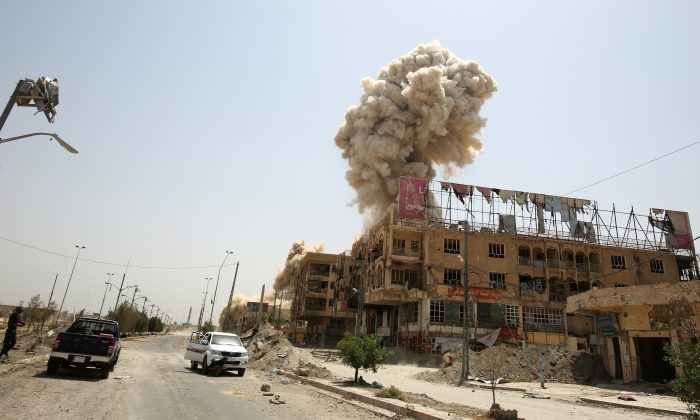 TOPSHOT - Smoke rises in the city of Fallujah on June 30, 2016 as Iraqi forces destroy a booby-trapped building after they've recaptured the city from Islamic State (IS) group jihadists. Iraqi forces have retaken full control of Fallujah, a longtime jihadist bastion just 50 kilometres (30 miles) west of Baghdad, after a vast operation that was launched in May. / AFP / AHMAD AL-RUBAYE (Photo credit should read AHMAD AL-RUBAYE/AFP/Getty Images)
Middle East

JERUSALEM—The recent defeat of ISIS in Fallujah could be the first note of the swan song for the brutal terrorist group.

ISIS held the city of Fallujah, one of Iraq’s largest cities, for 29 months. Aside from some locations in Syria, that leaves only Iraq’s second largest city, Mosul, as a stronghold of the group.

According to experts, the relatively quick sweep by Iraqi security forces of Fallujah in late June still leaves fears on the table that ISIS will continue a push to infiltrate into other areas outside of Iraq and Syria. Both countries have long been under the partial control or influence of ISIS.

“We’re going to see a slow migration of the ISIS center of gravity from where it is right now in Iraq and Syria–westward,” said Michael Knights, a fellow with The Washington Institute for Near East Policy who specializes in the military and security affairs of Iraq.

Knights points out a few specific places where the group will likely try to set up shop: the northern and eastern regions of Syria, northern Lebanon, southern Turkey, parts of Iraq, and parts of Jordan, particularly in and around refugee camps.

Despite that, working on preventative measures just doesn’t seem to be on the agenda.

“People want to get rid of ISIS infestations in their own countries,” said Knights. “You’re dealing with a failed state in Syria. The Iraqis are fully absorbed with trying to drive ISIS out of their cities. The Lebanese clearly don’t have the capabilities to secure their northern borders.

“The Turks, they are probably going to try harder than anybody else to prevent spillover, but there the horse has already bolted. They already let ISIS in.”

The challenges of containing cross-border movement, such as organized crime, networks of safe houses, and the wide availability of military-grade weaponry, could also help ISIS sustain some level of operations.

But it will likely be nothing like what we have seen from ISIS up to this point, and for one very simple reason: they now have a serious image problem.

“They looked like they were on the march, and they are turning back into a terrorist movement again,” said Knights. “All they are doing is delaying the inevitable.”

Though he says they will likely still target innocent civilians in deadly attacks, on the macro scale of warfare whatever they do from here on out will largely be for show.

“Security force capability is improving, ISIS capability is declining,” said Knights. “They are getting killed faster than they can replace themselves, they are losing experience, and they are unable to move forces.”

Knights says that ISIS leadership used to maneuver their most capable forces like chess pieces from one key battle to another. As they lose top fighters and even some top leadership, coalition and security forces can now dictate where battles happen.

“They’re getting ground down,” he said of ISIS.

Though ISIS recently released a graphic detailing their “areas of control” to mark two years since their formation, it is difficult to say exactly how widespread they are. The group thrives on the instability of failed states and is adept at infiltration. Dealing with the immediate threat of ISIS has left little room for states to sideline the group’s infiltration attempts. Also, despite the group’s worsening image problem, the threat of lone wolf attackers who identify with and emulate ISIS-inspired violence remains.

Israel is a particularly vivid example.

The only Western-style democracy in the Middle East, Israel has a unique security position in relation to ISIS. In the north, they share a border with Syria and the Hezbollah stronghold of Lebanon.

There are also increasingly regular and alarming instances of lone wolf, ISIS-inspired attacks. Just this week, Israel’s Shin Bet security force announced that the men who murdered four people and wounded fifteen others in a busy Tel Aviv marketplace on June 8 were “inspired” by ISIS.

More than a dozen residents of the killers’ hometown Yatta, in the West Bank, have since been arrested as accomplices to the attack. Some of them are accused of helping to manufacture and traffic weapons, a problem in other areas with ISIS sympathizers.

The susceptibility of young men in the West Bank to ISIS propaganda is an issue to contend with, according to Itamar Rabinovich, an expert on the Middle East with the Brookings Institute, a former Israeli ambassador to the United States.  Rabinovich was chief negotiator with Syria from 1992 to 1996.

He adds that though “quite a few of these young people are inspired by ISIS propaganda,” as sometimes happens in the United States, the real problem in the region could be Jordan.

“Jordan is the most significant venue for ISIS to have a breakthrough,” said Rabinovich. He points to an “accumulation of problems,” including the possibility of a terrorist posing as one of Syria’s 1.4 million refugees.

Yet by expert Omar Lamrani’s assessment, ISIS only represents a true threat in places where there is a “complete breakdown in the government.” Lamrani is a senior military analyst with the U.S.-based intelligence organization Stratfor.

“They remain rather limited in their ability to infiltrate because they thrive in places where failed states exist,” said Lamrani. Following some regional chaos that ensued after 2011’s Arab Spring and the black holes of chaos created by war and massive refugee crises around the same time, ISIS was able to gain some traction in Iraq and Syria in the past two years.

Of all the regional countries, he points to Jordan, Tunisia, and Lebanon as being at risk of infiltration. Jordan is particularly troubling, in part due to large numbers of refugees, though other factors are at play.

Though in the long run it’s “not very likely” that Jordan will become some kind of ISIS sanctuary, many Jordanians have gone into Syria to support the group. Israeli security forces also believe that one of the Tel Aviv killers was partially radicalized—or at least exposed to terrorist influences—during time he spent in Jordan.

In the end, Omrani says that there is still much to do to defeat ISIS, despite the dramatic victory over them in Fallujah.

“It’s not a game changer. It’s one battle among many in the long road to defeating ISIS. Just because Fallujah is taken doesn’t mean Islamic State is about to lose tomorrow,” he said. “But they are losing.”