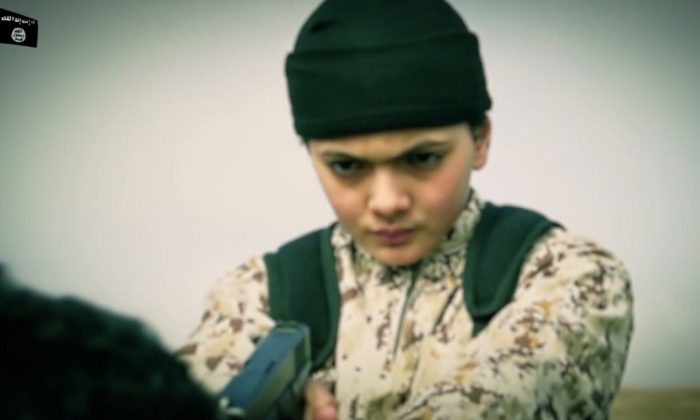 A video posted by ISIS shows a child apparently executing an alleged Israeli spy. In the video, ISIS has a message, which reads: “Our eyes are on Jerusalem, which will not be taken back.”

The footage shows the child point a gun to the front of the man’s head before he pulls the trigger, killing him. After the man–identified as Mohammad Ismail by Rita Katz, the Director of SITE Intelligence Group–slumps over, the boy fires several more times. SITE has previously reported on ISIS propaganda videos, including the beheadings of journalists James Foley and Steven Sotloff.

Photos of the incident were being circulated across social media on Tuesday. The video, which was also uploaded on YouTube, has the typically slick ISIS production values.

The video was shot in what appears to be on the side of a grassy hill. A man in the video says that “the Jews have become frightened because the promise is near.” The man adds: “We’ve revealed to you some of the names and pictures of spies in Jerusalem, so make those who recruited them see their blood flow.”

In the video, Ismail gives a lengthy confession, detailing his training. ISIS tends to force its hostages to confess to crimes.

He is seen wearing an orange jumpsuit, which is also typical of ISIS propaganda footage. After the confession, he is seen being led outside with a child soldier and an ISIS militant.

The young boy and the militant aren’t wearing face masks.

The latest video has not been authorized by government outlets, but the SITE group says it’s from ISIS.

Meanwhile, Iraqi security forces on Tuesday retook a town next to the militant-held city of Tikrit as they pressed their offensive against ISIS militants, two military officials said.

The Iraqi forces entered Alam early in the morning and hours later gained full control of the town adjacent to Tikrit, the two Iraqi officials said, speaking on condition of anonymity because they were not authorized to talk to reporters.

The battle for Saddam Hussein’s hometown is a key test for the Iraqi forces as they struggle to win back some of the Islamic State group’s biggest strongholds in Iraq.

Ahmed al-Karim, the Salahuddin provincial council chief, told The Associated Press that progress had been slow due to roadside bombs and sniper attacks.

The offensive to wrest Tikrit from IS has received significant assistance from Iranian military advisers who are guiding Iraq’s Shiite militias on the battlefield. U.S.-led coalition forces have said they are not providing aerial support for this particular mission because the Iraqis have not requested it.