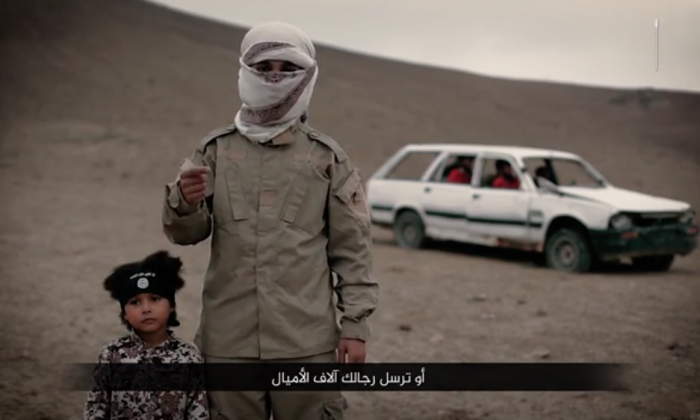 ISIS has released a new video purportedly showing a 4-year-old child execute three “spies” by blowing them up in a car.

In the video, an adult ISIS member addresses David Cameron, condemning the British air strikes on ISIS as cowardly, and says that the three prisoners held in the car will be killed, just as their espionage caused the death of ISIS members.

“So prepare your armies…for we too are preparing our armies, for our meeting lies at Dabiq,” the ISIS member said, referring to the small Syrian town where the battle that triggers the apocalypse is supposed to take place, according to ISIS theology.

One of the prisoners held in the car then makes a confession and tells the “apostates” who recruited him for espionage to surrender to ISIS.

A small child, dressed in ISIS uniform, then presses a button, and the car is shown exploding into flames, presumably killing the three men inside the vehicle.

Previously identified as Isa Dare, the child was taken to ISIS territory by her mother, Grace Dare, the daughter of Christian Nigerian immigrants to Britain, the Telegraph reports.

Grace had attended a Roman Catholic school and was a Christian, her father said, until she began to be radicalized by ISIS propaganda online. She traveled to Syria in 2012 and married an ISIS militant from Sweden.

This is not the first time ISIS has used a child in an execution video. Earlier this month it had released a video of an English-speaking child making threats to America before slitting the throat of a prisoner in a forest.

The full video can be found at the Daily Mail.