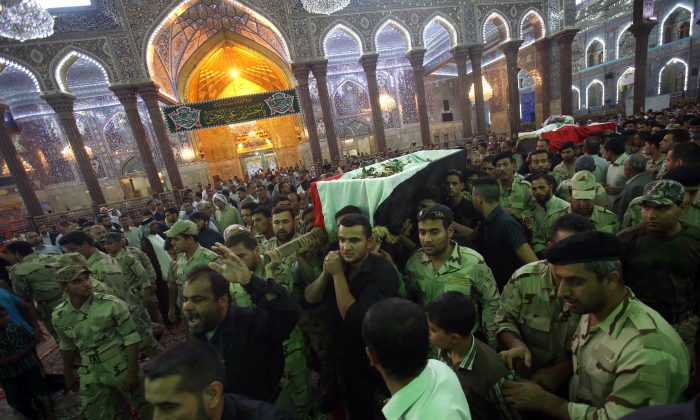 Iraqi mourners carry the coffins of locals killed in fighting in the predominantly-Sunni Muslim city of Samarra, during their funeral in the holy city of Karbala, 80 kilometers (50 miles) south of Baghdad, on July 12, 2014. Iraqi forces and tribal fighters beat back a fresh assault by Sunni militants on the town of Haditha, strategic for the large nearby dam and its oil refinery, police said. (Mohammed Sawaf/AFP/Getty Images)
Middle East

After a month of fighting in Iraq, the ISIS insurgency has made considerable progress, even if there is now something of a stalemate as Shi’a militias organize themselves and the weak Iraqi Army gets a measure of support from Russia, the United States and especially Iran. Even so, the change in the country since the beginning of June has been startling, with ISIS now able to extend its territorial control right across much of north-eastern Syria and north-western Iraq.

Attempts to capture and maintain control of the Baiji oil refinery north of Baghdad may prove difficult and the movement would still like to control the Haditha Dam and hydroelectric plant on the Euphrates and to overrun the huge Balad Air Base with its munitions and other stores.

What it has already achieved, though, is probably more than it expected, and its longer-term aims are aided by substantial changes in Syria. Until perhaps a fortnight ago, the ISIS paramilitaries there were competing with other extreme Islamist groups such as al-Nusrah Front and some of the more secular groups opposing the Assad regime. That has changed quite dramatically with reports that elements from al-Nusrah have gone across to join ISIL.

Even more notable has been a string of defections from some of the anti-regime groups that have previously been getting western support. This raises fears among western politicians and their militaries that a snowball effect is developing, at least in Syria, and that more weapons and equipment will be taken up by the Islamists.

Such unease has been increased by last week’s sermon in a mosque in Mosul by the ISIS leader, Abu Bakr al-Baghdadi, in which he announced the founding of a new Caliphate, demanding that all Muslims accept him as the leader. At first sight this may seem a grandiose and premature claim, and very possibly an indication of hubris, but the defections in Syria and the situation in Iraq mean that it has to be taken seriously.

One reason for this is the considered view recently aired by the chair of the U.S. Chiefs of Staff, General Martin Dempsey, that the Iraqi government does not currently have the ability to regain the territory lost to ISIS in the past month. Since the Obama administration is highly unlikely to intervene directly in the conflict, beyond the possible use of armed drones and strike aircraft, this means that any serious counter-attack by the Iraqi forces against ISIS must be bolstered by Russia or Iran.

The Russians are supplying some ground attack aircraft with technical support that may well include pilots as well as ground crew, but Russia does not have the military capability or the political will to go much further.

Iran is a different matter, but the president, Hassan Rouhani, knows only too well that heavy Iranian military involvement in Iraq will add to the fear in Saudi Arabia over the prospect of a “Shi’a Crescent” from the Mediterranean to the Arabian Sea, leading to more Saudi support for ISIS in Iraq and Syria to counter this.

What it all seems to mean is that ISIS is making considerable progress and may be very difficult to stop, yet there are other factors which support a rather different analysis.

There are, for example, indications that ISIS may have over-reached itself in Iraq by the very speed of recent advances. With only a few thousand paramilitaries involved, ISIS has often used them as the advancing fighters, leaving behind just a few to consolidate power in towns and cities which have been taken over, while allowing clan militias and former Ba’athists to manage the local populations. Any question of imposing rigid Islamist rule is for another day (or month or year)

In other words, ISIS is in coalition with numerous other groups and paramilitary elements. This means that any attempt to consolidate an extreme Caliphate centered on the two countries will require public consent which simply won’t be there—and ISIS does not have sufficient people to impose its will on a reluctant population.

While the great majority of the citizens of north-western Iraq are Muslim, very few would accept the rigorous and brutal imposition of all aspects of Sharia Law by an autocratic group claiming to represent the only way forward for the entire Islamic world. Many Saudis, too, will react to the ISIS claim of a Caliphate since it implies that the House of Saud is not the legitimate “Keeper of the Two Holy Places.”

In short, the progress made by ISIS over the past month may seem dramatic but greater challenges lie ahead if the extraordinary claim of a new Caliphate is not to be doomed from the start.