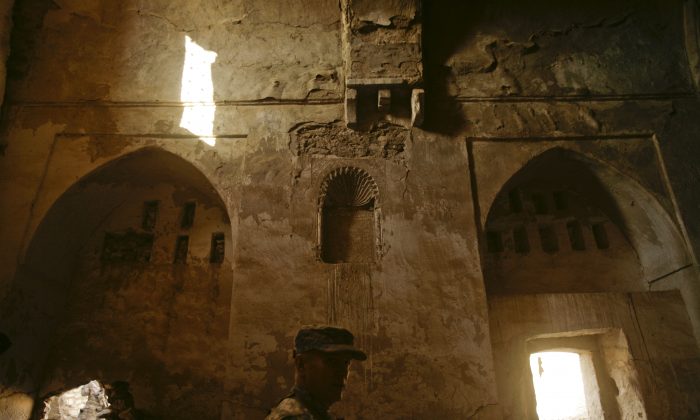 St. Elijah's Monastery being toured by US troops during Forward Operating Base on Nov. 7, 2008. (AP Photo/Maya Alleruzzo)
International

IRBIL, Iraq—The oldest Christian monastery in Iraq has been reduced to a field of rubble, yet another victim of the Islamic State’s relentless destruction of ancient cultural sites.

For 1,400 years the compound survived assaults by nature and man, standing as a place of worship recently for U.S. troops. In earlier centuries, generations of monks tucked candles in the niches and prayed in the cool chapel. The Greek letters chi and rho, representing the first two letters of Christ’s name, were carved near the entrance.

Now satellite photos obtained exclusively by The Associated Press confirm the worst fears of church authorities and preservationists—St. Elijah’s Monastery of Mosul has been completely wiped out.

In his office in exile in Irbil, Iraq, the Rev. Paul Thabit Habib, 39, stared quietly at before- and after-images of the monastery that once perched on a hillside above his hometown of Mosul. Shaken, he flipped back to his own photos for comparison.

“I can’t describe my sadness,” he said in Arabic. “Our Christian history in Mosul is being barbarically leveled. We see it as an attempt to expel us from Iraq, eliminating and finishing our existence in this land.”

The Islamic State (ISIS), which broke from al-Qaida and now controls large parts of Iraq and Syria, has killed thousands of civilians and forced out hundreds of thousands of Christians, threatening a religion that has endured in the region for 2,000 years. Along the way, its fighters have destroyed buildings and ruined historical and culturally significant structures they consider contrary to their interpretation of Islam.

Those who knew the monastery wondered about its fate after the extremists swept through in June 2014 and largely cut communications to the area.

Now, St. Elijah’s has joined a growing list of more than 100 demolished religious and historic sites, including mosques, tombs, shrines and churches in Syria and Iraq. The extremists have defaced or ruined ancient monuments in Nineveh, Palmyra and Hatra. Museums and libraries have been looted, books burned, artwork crushed—or trafficked.

“A big part of tangible history has been destroyed,” said Rev. Manuel Yousif Boji. A Chaldean Catholic pastor in Southfield, Michigan, he remembers attending Mass at St. Elijah’s almost 60 years ago while a seminarian in Mosul.

“These persecutions have happened to our church more than once, but we believe in the power of truth, the power of God,” said Boji. He is part of the Detroit area’s Chaldean community, which became the largest outside Iraq after the sectarian bloodshed that followed the U.S. invasion in 2003. Iraq’s Christian population has dropped from 1.3 million then to 300,000 now, church authorities say.

Suzanne Bott, who spent more than two years restoring St. Elijah’s Monastery as a U.S. State Department cultural adviser in Iraq, teared up when the AP showed her the images.

“Oh no way. It’s just razed completely,” said Bott. “What we lose is a very tangible reminder of the roots of a religion.”

Imagery analyst Stephen Wood, CEO of Allsource Analysis, reviewed the pictures for AP and identified the date of destruction between Aug. 27 and Sept. 28, 2014. Before it was razed, images show a partially restored, 27,000-square-foot religious building. Although the roof was largely missing, it had 26 distinctive rooms including a sanctuary and chapel. One month later, “the stone walls have been literally pulverized,” said Wood.

“Bulldozers, heavy equipment, sledgehammers, possibly explosives turned those stone walls into this field of gray-white dust. They destroyed it completely,” he said. “There’s nothing to rebuild.”