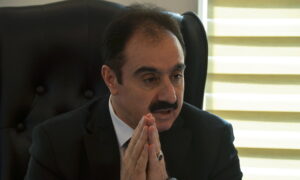 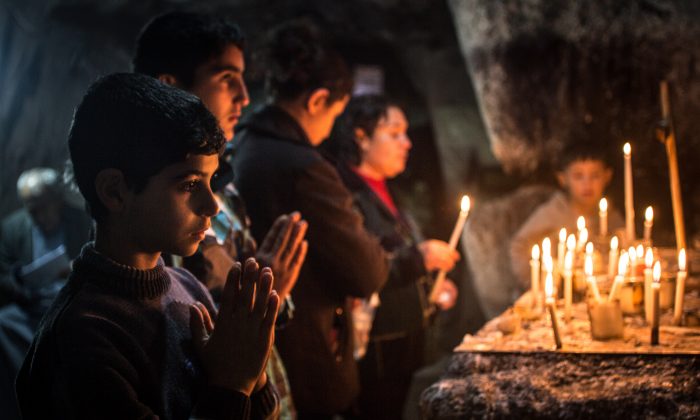 Iraqi Christians light candles inside a shrine on the grounds of Mazar Mar Eillia (Mar Elia) Catholic Church, that has now become home to hundreds of them, forced to flee their homes due to the Islamic State advances, in Erbil, Iraq, on Dec. 12, 2014. (Matt Cardy/Getty Images)
Middle East

“Actually, the easy answer is, there are no life in Iraq.”

Al-Bazi, a former ISIS hostage, talked about his own treatment at the hands of ISIS. He said he saw his church and car blow up in front of him. He was shot by an AK-47 in his leg, he said, and his captors broke his teeth, nose, and back with a hammer.

“I still keep my shirt when they kidnapped me, and still I look to my blood every day and I remember, and this is what happen even to my people every day,” he said.

Al-Bazi was one of the speakers at a news conference Wednesday on a new report containing evidence of ISIS crimes against Christians that was submitted to the State Department.

“The evidence contained in this report as well as the evidence relied upon by the European Parliament fully support—and I suggest to you compel—the conclusion that reasonable grounds exist to believe the crime of genocide has been committed against Christians in the region,” Carl Anderson, CEO of the Knights of Columbus, said while presenting the report Thursday at a National Press Club news conference.

The report was co-sponsored by the Knights of Columbus, a Catholic society, and In Defense of Christians, a nonprofit organization dedicated to preserving Christianity in the Middle East.

The 278-page report includes a legal brief, 44 Iraqi witness statements, and lists of crimes against Christians, Christians that were murdered, and churches that were attacked, as well as other supplementary materials.

Anderson asked the United States to look to the European Parliament’s recent decision to recognize ISIS’ treatment of religious minorities—including Christians—as genocide, and said that an American declaration excluding Christians would be “contrary to the facts.”

Nina Shea, director of the Center for Religious Freedom at the Hudson Institute, described an incident where a Christian woman witnessed ISIS crucify her husband to the door of their home.

Yet, she said the State Department hesitates to include Christians in a formal declaration of genocide against ISIS because the department believes that ISIS views Christians as respected “people of the book” and offers Christians the opportunity to pay a tax.

The tax allegedly pays for protection and the right to worship, Shea said. But that’s not respect, she added, it’s extortion.

“The cloth of genocide is not lain overnight,” Bishop Anba Angaelos of the Coptic Orthodox Church in the United Kingdom said at the news conference.

Johnnie Moore, author of “Defying ISIS: Preserving Christianity in the Place of Its Birth and in Your Own Backyard,” also spoke at the report presentation. He said that earlier this month, Christian women had been handcuffed and shot for their faith.

Over 200 House lawmakers have voiced their support of a declaration of genocide against ISIS for its treatment of Christians and other religious minorities through House Concurrent Resolution 75.

The resolution was introduced in September by Reps. Jeff Fortenberry (R-Neb.) and Anna Eshoo (D-Calif.), and defines targeted “atrocities” against Christians and other religious minorities as “war crimes,” “crimes against humanity,” and “genocide.”

The House Foreign Affairs Committee unanimously passed the resolution on March 2. In response, In Defense of Christians President Toufic Baaklini said in a statement:

[In Defense of Christians] thanks the House Foreign Affairs Committee and the co-sponsors of H. Con. Res. 75 for calling ISIS’ crimes by the rightful name, a statement that will resonate around the world, and urges the House leadership to bring this bill to a vote and the Obama administration and the State Department to officially recognize the genocide.

Secretary of State John Kerry is expected to make a decision about a declaration of genocide by March 17.