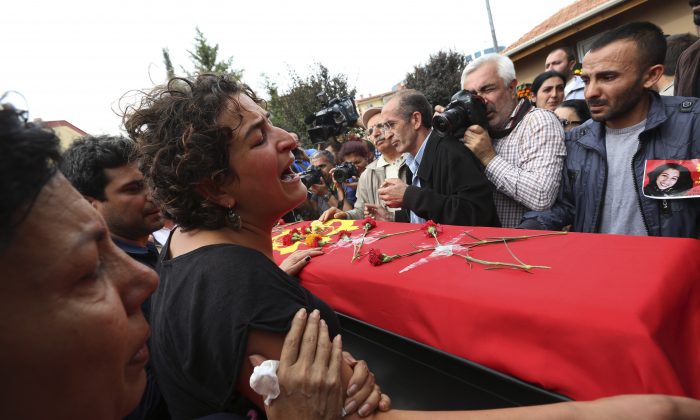 A relative cries over the coffin of Korkmaz Tedik, 25, killed in Saturday's bombing attacks, during his funeral, at Ankara, Turkey, Sunday, Oct. 11, 2015. (AP Photo/Burhan Ozbilici)
Europe

ANKARA, Turkey—Thousands mourned the 95 victims of Turkey’s deadliest attack in years as state inspectors tried Sunday to identify who sent suicide bombers to a rally promoting peace with Kurdish rebels.

No one has claimed responsibility, but the attack bears similarities to a suicide bombing the government blames on the ISIS group that killed 33 Turkish and Kurdish peace activists near a town bordering Syria in July.

Police detained 14 suspected ISIS members Sunday in the central Turkish city of Konya, but it wasn’t clear if they were related.

Some Turkish media declared that peace itself was under attack. The bombers struck hours before Kurdish rebels battling Turkish security forces followed through with plans to declare a unilateral cease-fire, to reduce tensions leading up to Nov. 1 elections.

Turkey’s government rejected the declaration, saying the rebels must lay down arms for good and leave the country. Turkey’s military meanwhile carried out more cross-border airstrikes against Kurdish shelters and positions in the Zap and Metina regions of Iraq.

While no one group has been ruled out in the bombings, government opponents blamed security forces for failing to protect the peace rally.

“The state which gets information about the bird that flies and every flap of its wing, was not able to prevent a massacre in the heart of Ankara,” said Selahattin Demirtas, co-chairman of the pro-Kurdish People’s Democracy Party.

On Sunday, police fired tear gas and scuffled with the mourners—some chanting “Murderer Erdogan!”—who tried to reach the blast site to lay carnations. A group of about 70 was eventually allowed to enter the cordoned-off area.

More than 10,000 also gathered in Turkey’s mostly Kurdish southeastern city of Diyarbakir, holding a moment of silence for the victims, including hundreds of wounded.

The Syrian government has an interest in destabilizing Turkey, which has made no secret of its desire to see President Bashar Assad ousted.

Thousands also demonstrated in Istanbul on Saturday, blaming the government.

Erdogan is hoping the ruling party regains its political majority, and critics accuse him of intensifying attacks on Kurds to rally nationalist votes. They worry the bombings could entice rogue Kurdish forces to attack, persuading Turks to seek security over peace.

The Islamic State in Iraq and Syria (ISIS), which is fighting Syrian Kurdish forces allied to Turkey’s Kurdish rebels, could benefit the most from this, since a continued military offensive within Turkey would take pressure off the extremist group in Syria.

The Syrian government also has an interest in destabilizing Turkey, which has made no secret of its desire to see President Bashar Assad ousted.

Regardless of who may have planned the attack, it showed how deeply Turkey is being drawn into the chaos in Syria, with which it shares a 900-kilometer-long (559-mile-long) border.

Turkey already hosts some 2.2 million refugees from Syria—more than any other nation—and extremists use Turkish territory to enter or exit the fray, increasing the threat of violence.

Kemal Kilicdaroglu, who leads the pro-secular opposition party, blamed Turkey’s support of opposition groups in Syria for the violence.

“That policy has brought terror to our country,” Kilicdaroglu said Sunday. “Turkey needs to rapidly get out of the Middle Eastern quagmire.”

Turkey agreed recently to more actively support the U.S.-led battle against the ISIS group, opening its bases to U.S. aircraft launching air strikes on the extremist group in Syria and carrying out a limited number of strikes on the group itself.

Relations between Kurds and Turks are already tense. Hundreds have died in Turkey in the last few months as a 2012 peace process was shattered.

Electoral gains by the People’s Democracy Party in June deprived the ruling party, which Erdogan founded, of its parliamentary majority after a decade of single-party rule. The new election was called after the ruling party failed to strike a coalition deal.

Erdogan has asserted that Kurdish rebels are a bigger threat to Turkey than the ISIS group.

Erdogan is seeking to extend the executive powers of his presidency, and while he denies it, opponents believe he has deliberately reignited the conflict with the Kurdistan Workers’ Party, or PKK, to shore up his party’s support. Erdogan has asserted that Kurdish rebels are a bigger threat to Turkey than the ISIS group.

Opinion polls indicate, meanwhile, that the ruling party is unlikely to regain a majority, again forcing it to build a governing coalition. Just how Saturday’s bombings will affect all this remains to be seen.