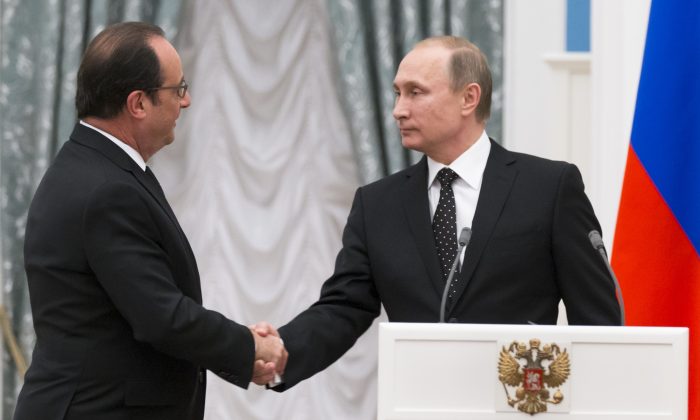 A large oil smuggling operation from ISIS-controlled areas in Syria and Iraq into Turkey has become a top-priority target in order to cripple the group, Russian President Vladimir Putin said.

Both Putin and French President Francois Hollande said the source of ISIS’ financing should be taken down as the first priority.

“Vehicles, carrying oil, lined up in a chain going beyond the horizon,” said Putin in Moscow. “Day and night they are going to Turkey. Trucks always go there loaded, and back from there – empty,” he said, according to state-funded RT.

“We are talking about a commercial-scale supply of oil from the occupied Syrian territories seized by terrorists. It is from these areas [that oil comes from], and not with any others. And we can see it from the air, where these vehicles are going,” Putin said, adding there’s “no doubt” oil from “terrorist-controlled” areas in Syria is going to Turkey.

“We assume that the top political leadership of Turkey might not know anything about this [illegal oil trade]. Hard to believe, but it is theoretically possible,” Putin noted. He added that Ankara should still try and stop the illegal smuggling of oil.

“But if the top political leadership [in Turkey] doesn’t know anything about this, let them find out. I can admit that there may be some elements of corruption, secret dealing, they should sort it out,” said Putin.

Turkish President Recep Tayyip Erdogan denied that his country is buying oil from ISIS after Putin made his comments.

“Shame on you–those who claim we buy oil from Daesh [ISIS] are obliged to prove it. If not, you are a slanderer,” Erdogan said, according to Al Jazeera TV.

The back-and-forth accusations come just days after Turkey shot down a Russian fighter plane near its southern border with Syria, bringing Russo-Turkish relations to the lowest point in years.

But Erdogan went even further.

Erdogan told Putin: “Daesh sells the oil they drill to [Syrian President Bashar] al-Assad. To Assad. Talk this over with Assad you support.”

The Turkish leader said his country is taking precautions to stop oil smuggling at its border.

Hollande, after meeting with Putin, said the focus should be on ISIS’ oil trade.

“It is necessary to hit ISIS training centers, to hit those centers where this terrorist army is being trained,” Hollande said, according to RT.