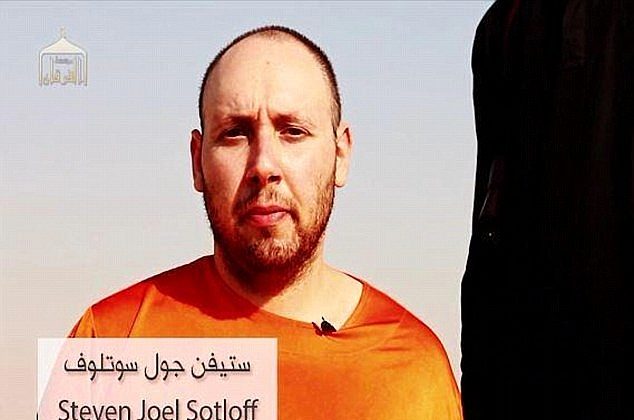 This still image from an undated video released by the Islamic State extremists on Tuesday purports to show journalist Steven Sotloff being held by the terrorist group.
US

Islamic State extremists released a video purportedly showing the beheading of American journalist Steven Sotloff, and warning President Barack Obama that as long as U.S. airstrikes against the militant group continue, “our knife will continue to strike the necks of your people.”

The video increases pressure on Obama to develop a strategy to defeat ISIS, and to intervene in Syria. State Department spokeswoman Jen Psaki said U.S. intelligence analysts will work as quickly as possible to determine if the video is authentic.

The footage—depicting what the United States called a sickening act of brutality—was posted two weeks after the release of video showing the killing of James Foley and just days after Sotloff’s mother pleaded for his life.

President Obama left for Europe Tuesday without commenting on reports of the murder of Sotloff. The State Department has not confirmed his death.

Barak Barfi, a spokesman for the family, said that the Sotloffs had seen the video.

“The family knows of this horrific tragedy and is grieving privately. There will be no public comment from the family during this difficult time,” Barfi said.

Steven Sotloff’s Twitter feed went silent in August 2013. In July, he said he had been pepper-sprayed by riot police in Antakya, Turkey, about 12 miles from the Syrian border. Weeks before he disappeared he wrote, “My friend Abdullah AlYasin was executed 2day in Aleppo. He was a wonderful man who put others b4 himself. Gr8 loss. Yerhamu Allah!” The last Arabic phrase is a traditional way of blessing a person who has died.

Sotloff reported extensively on the aftermath of the Benghazi attacks from Libya and on unrest and on attempts to create democracy in Egypt. He was known for his courage and for his sense of humor. As a freelancer, he contributed to Time and Foreign Policy magazines.

No Regard for Humanity

David Cuillier, president of the Society of Professional Journalists, stated, “Once again, we are angered to hear that another American journalist has been brutally murdered by thugs who have no regard for humanity or common decency.”

He noted that it has been 12 years since terrorists beheaded Daniel Pearl of the Wall Street Journal. According to the Committee to Protect Journalists, since 1992 more than 1,000 journalists have been killed serving the public—30 so far this year, wrote Cuillier.

“The more these murderers try to intimidate journalists, the weaker their position and credibility in the world,” Cuillier said. “Bullies will never deter reporters’ resolve to cover world affairs with dogged determination and professionalism.”

He reminded other journalists to follow the code of ethics and show good taste, and avoid pandering to lurid curiosity.

Al-Jazeera issued a statement confirming that idea: “We respect Steven Sotloff and won’t air images of his death, or him in a jumpsuit. We suggest all media do the same.”

Psaki said it is believed that “a few” Americans are still being held by the Islamic State. Psaki would not give any specifics, but one is a 26-year-old woman kidnapped while doing humanitarian aid work in Syria, according to a family representative who asked that the hostage not be identified out of fear for her safety.

The fighter who apparently beheads Sotloff in the video calls it retribution for Obama’s continued airstrikes against the group.

“I’m back, Obama, and I’m back because of your arrogant foreign policy toward the Islamic State … despite our serious warnings,” the fighter says. “So just as your missiles continue to strike our people, our knife will continue to strike the necks of your people.”

The killer specifically mentions the recent U.S. airstrikes around the Mosul Dam and the beleaguered Iraqi town of Amirli, making it unlikely that Sotloff was killed at the same time as Foley, as some analysts had speculated.

American political leaders are calling for a military response.

Wisconsin Sen. Ron Johnson said the Islamic State extremists are evil barbarians who must be defeated. He did not specify how.

Florida Gov. Rick Scott on Tuesday called Islamic State militants “evil” and demanded that President Barack Obama destroy them. Sotloff was from Florida, and his family lives there.