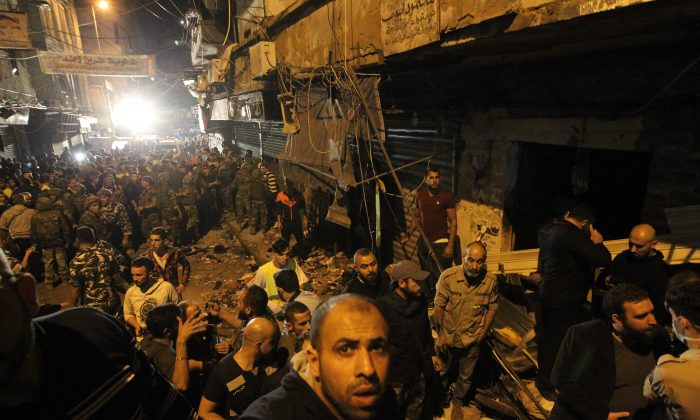 Emergency personnel gather at the site of a twin suicide bombing in Burj al-Barajneh, in the southern suburbs of the capital Beirut on November 12, 2015. (ANWAR AMRO/AFP/Getty Images)
Middle East

BEIRUT—Twin suicide bombings struck a southern Beirut suburb that’s a stronghold of terrorist Shiite Hezbollah on the evening of Thursday, Nov. 12, killing at least 43 people and wounding scores more in one of the deadliest attacks in recent years in Lebanon.

The attack was quickly claimed by the terrorists ISIS, which is fighting in neighboring Syria and Iraq but has not had a recognized affiliate in Lebanon, though the tiny Mediterranean country has seen deadly spillovers from the civil war next door.

The explosions hit minutes apart during rush hour in an area of southern Beirut called Burj al-Barajneh, a Hezbollah stronghold. The Shiite group has been fighting in Syria along with Syrian President Bashar Assad’s forces. The area has been hit in the past and Sunni militant groups have threatened to carry out more attacks there.

Along with the 43 killed, the bombings also wounded 239 people, the Health Ministry announced.

It was not immediately clear how many attackers were involved. According to a Lebanese security official, the first suicide attacker detonated his vest of explosives outside a Shiite mosque, while the second blew himself up inside a nearby bakery.

An apparent third attacker was found dead, his legs blown off while he still wore an intact explosive belt, said the official, speaking on condition of anonymity in line with regulations. The official speculated that the third man may have been killed from the explosion set off by the second bomber, as he was reportedly close to that blast.

Al-Mayadeen TV also reported there was a third would-be bomber, and showed a video of a bearded young man with an explosives’ belt. The report said he died before he was able to detonate his explosives.

At the scene of the blasts, residents showed reporters what they said were metal pebbles that are usually put inside an explosive belt to inflict maximum casualties.

Hospitals in southern Beirut called on people to donate blood and appealed on residents not to gather at hospital gates so that ambulanced and emergency staff could work unhindered.

For more than an hour, ambulances struggled to ferry the wounded and the dead from the neighborhood while Lebanese troops and Hezbollah gunmen cordoned off the area, preventing anyone from getting close to the site of the two blasts, less than 50 meters (yards) apart.

“There is a massacre inside and we will not let you take photos,” a Hezbollah member screamed at an Associated Press photographer at the scene.

Hezbollah called on people to leave all coffee shops in the area, which are usually packed with customers on Thursday evenings, and urged residents to inform the group about any suspicious activities.

Prime Minister Tammam Salam condemned the “cowardly criminal act,” urging the Lebanese to unite. U.N. Special Coordinator for Lebanon Sigrid Kaag also denounced the “heinous attack,” stressing the need for those responsible to be brought to justice and saying that the international community was standing by Lebanon.

The ISIS posted its claim of responsibility on social media pages linked to the Sunni group. The claim could not be independently verified but it was similar to other ISIS claims.

Thursday’s attack shattered a period of relative calm in Lebanon. It was the first such large-scale bombing since mid-2014, and comes amid much political upheaval.

ISIS said the attack was carried out by detonating an explosives-laden motorcycle close to a gathering of Shiites—a likely reference to the mosque—and that it was followed by a suicide bomber wearing an explosives vest. The statement made no mention of a third, would-be bomber.

“Let the Shiite apostates know that we will not rest until we take revenge in the name of the Prophet (Muhammad),” the IS claim said.

Thursday’s attack shattered a period of relative calm in Lebanon. It was the first such large-scale bombing since mid-2014, and comes amid much political upheaval in the country. It was also the deadliest attack in Lebanon since Aug. 23, 2013, when two car bombs exploded outside two Sunni mosques packed with worshippers in the northern city of Tripoli, killing 47 people and wounding hundreds.

Lebanon has been without a president for over a year. The country has seen major protests in the past few months over the government’s inability to agree on a solution for a festering garbage crisis, and Parliament has not functioned properly for years.

A spate of similar bombings in 2013 and 2014 targeted Hezbollah strongholds in retaliation for the group’s involvement in the Syrian civil war, which has angered Sunni groups across the Middle East.

As for the ISIS, this is the second attack it has claimed so far in Beirut, after a January 2014 bombing in the district of Haret Hreik, also a Shiite neighborhood in the Lebanese capital, according to the U.S.-based SITE Intelligence Group, which tracks extremist messaging on the Internet.

Among those killed in Thursday’s blasts were two staffers of the American University of Beirut (AUB), according to a memo circulated to the AUB community. The memo did not give the names of the staffers or other details.

In Iran, which is a key ally of the Lebanese Hezbollah, a statement from the Foreign Ministry condemned the Beirut blasts and offered condolences to government and people of Lebanon.

Syria’s civil war has spilled over into Lebanon on multiple occasions, inflaming sectarian tensions between the country’s Sunnis and Shiites and leaving scores dead. The Lebanese Sunni and Shiite communities have lined up on opposing side of Syria’s civil war—Sunnis broadly support the Sunni rebels fighting against Assad while the Shiites typically back Assad.

Lebanon also hosts more than 1.1 million Syrian refugees—equivalent to a quarter of the country’s entire population.