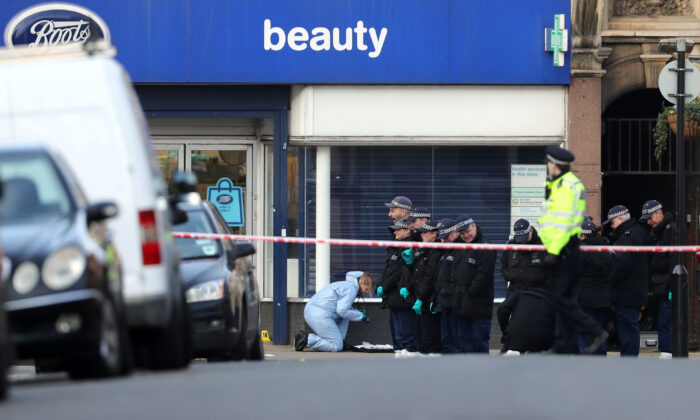 Police officers and forensic officer are seen near the site where a man was shot by armed officers in Streatham, south London, Britain, on Feb. 3, 2020. (Antonio Bronic/Reuters)
UK

The ISIS terror group said it was responsible for a stabbing attack that left three injured in London over the weekend.

The person who carried out the stabbings was “a fighter of Islamic State, and carried out the attack in response to calls to attack the citizens of coalition countries,” the terror group’s news agency said in a statement.

The Metropolitan Police said the suspect wasn’t formally identified. “However, given the circumstance of the incident, we are confident that he was Sudesh Amman, aged 20,” police said in a statement.

“The suspect had been recently released from prison, where he had been serving a sentence for Islamist-related terrorism offences.”

Police shot the suspect dead at the scene of the crime on Streatham High Road around 2 p.m. local time. He had a device strapped to his body, but it turned out to be a “hoax device,” the statement said.

Three people were rushed to nearby hospitals. One man, in his 40s, was initially considered to be in life-threatening condition but has improved. A woman in her 50s who suffered non-life threatening injuries was later discharged from the hospital. The third victim suffered minor injuries and was being treated.

Amman’s mother, Haleema Faraz Khan, told Sky News that she saw him three days prior to the attack. She said her son was a “polite and lovely boy” before he served time in prison.

“He became more religious inside prison; that’s where I think he became radicalized. He was watching and listening to things online which brainwashed him,” she said.

“Before he went to prison, he was not that religious. After he came out, he was really religious.”

Sadiq Khan, the mayor of London, said that there were at least 70 people convicted of terrorism offenses who were released, and he noted that another recent attack was carried out “by someone released from prison despite being intent on killing innocent people.”

“Something is clearly going serious wrong—and the government have serious questions to answer,” he said in a statement.

Prime Minister Boris Johnson said that releasing people early who are convicted of such offenses involves a number of problems, including rehabilitation.

“What was he doing out on automatic early release, and why was there no system of scrutiny, no parole system to check whether he was really a suitable candidate?” Johnson told reporters, AFP reported.

“Looking at the problems we have with reeducating and reclaiming and rehabilitating people who succumb to Islamism, it’s very, very hard and very tough—and it can happen that the instances of success are really very few.”

New laws were being pursued to cancel automatic early release from prison for people convicted of terrorism offenses, but it would be difficult to apply the cancelation to people already convicted, he said.