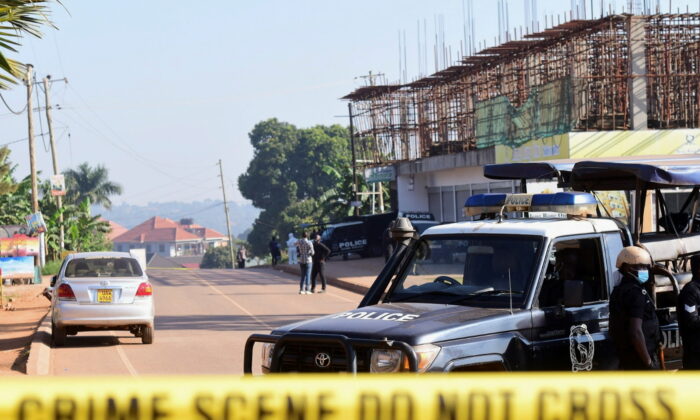 The ISIS terrorist group has claimed responsibility for a deadly bomb attack at an eatery in the capital of Uganda on Oct. 23 that killed at least one person.

In a statement posted on an affiliated Telegram channel on Oct. 24, ISIS stated that some of its members had detonated an explosive device in a bar where “members and spies of the Crusader Ugandan government were gathering” in Kampala, the Ugandan capital.

The blast killed a 20-year-old waitress and wounded three others, two of whom are in critical condition, according to police.

Ugandan President Yoweri Museveni said three ISIS terrorists disguised as customers entered the eatery and left a package that exploded, noting that the incident “seems to be a terrorist act” and promising to hunt down those responsible.

“We regret the death of the young lady and the [three] that were injured,” Museveni wrote on Twitter. “Earlier on, I had been told of five injured, but now, I am told, they are three.”

Police confirmed that the explosive device that was used in the terrorist attack was packed with nails and exploded at about 9 p.m. at the restaurant, Digida Pork Point, located on the outskirts of Kampala.

“I condemn the action of the ‘parasite pigs’ that planted a bomb at Digida Pork Point where they sell pork, sodas & alcohol,” Museveni wrote on Twitter. “Although these people were breaking curfew hours & using the place as a bar, still the criminality of the perpetrators must be condemned.”

In 2010, the Somali ISIS terrorist group al Shabaab killed dozens of people in Kampala in a bomb attack, stating that it was punishing Uganda for deploying troops in Somalia.

On Oct. 15, ISIS also claimed responsibility for a deadly suicide bomb attack at a Shiite mosque in southern Afghanistan that killed 47 people and injured dozens more.

The deadly attack was the second incident targeting worshippers in the country in just one week.