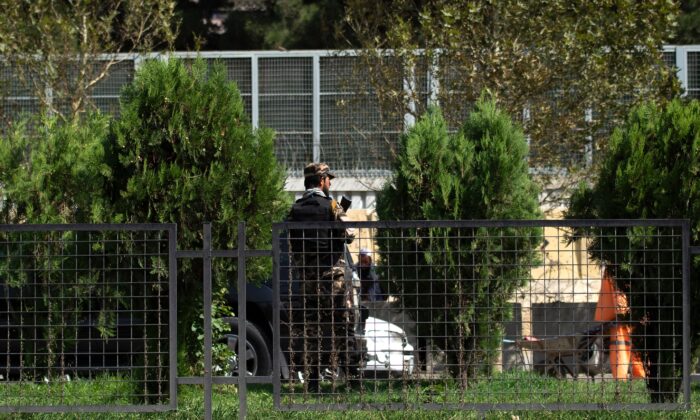 A Taliban fighter stands guard in front of the Russian embassy after a suicide attack in Kabul on Sept. 5, 2022. (Wakil Kohsar/AFP via Getty Images)
Afghanistan

The ISIS terrorist group has claimed credit for Monday’s deadly suicide bomb attack near the entrance of the Russian embassy in the Afghanistan capital, Kabul.

In a statement on the extremist group’s Telegram channel, ISIS said one of its fighters “blew up his suicide vest in a gathering attended by Russian employees” near the embassy.

Russia’s ministry of foreign affairs confirmed on Monday that two staff members of the Russian embassy in Kabul were killed in the blast that also injured nearly a dozen other people.

“As a result of the attack, two employees of the diplomatic mission were killed, and there are also victims among Afghan citizens,” the ministry said.

A local police spokesman said four others who died in the blast were Afghan civilians, Reuters reported.

Ahmad Samir, a boy who survived the attack and was treated in a nearby hospital for head injuries following the attack, recalled the moment the blast went off.

“There were so many injured people around, everyone was fleeing the site,” Samir said.

Authorities confirmed that the ISIS terrorist was shot dead by armed guards as he approached the embassy gate in the Darul Aman area in southwest Kabul.

Monday’s blast went off at the entrance to the embassy’s consular section, where Afghans were waiting for news about their visas, according to the ministry and the state news agency RIA Novosti. A Russian diplomat had emerged from the building to call out the names of candidates for visas when the explosion occurred, the agency said.

It was the latest in a series of bombings and other attacks since the Taliban seized power a year ago, deposing a Western-backed government and capping their 20-year insurgency.

The latest bombing, however, appears to be the first attack that targeted a foreign diplomatic mission in Kabul since the Taliban takeover.

Russia is one of the few countries to have maintained an embassy in Kabul after the Taliban took over the country. Although Moscow does not officially recognize the Taliban’s government, they have been in talks with officials over an agreement to supply gasoline and other commodities.

The attack was condemned by many, including Kremlin spokesman Dmitry Peskov, who called the explosion “a terrorist act, absolutely unacceptable.”