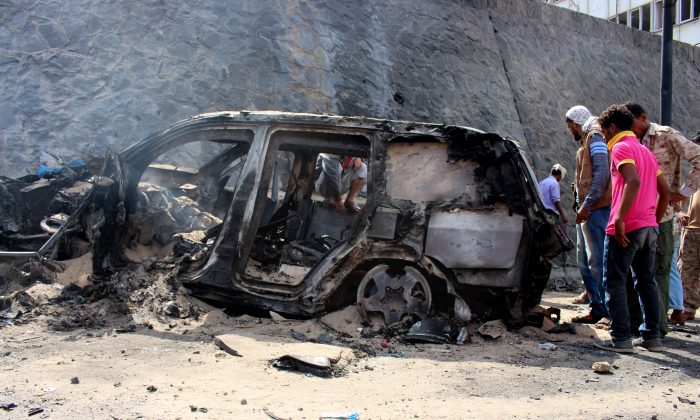 Yemenis inspect the scene of a car bomb attack that killed a Yemeni senior official in the southern port city of Aden, Yemen, Sunday, Dec. 6, 2015. A huge explosion killed the governor of Yemen's southern Aden province and six of his bodyguards on Sunday, security officials said, in an attack that was later claimed by a local Islamic State affiliate. (AP Photo/Wael Qubady)
Middle East

SANAA, Yemen—A huge explosion killed the governor of Yemen’s southern Aden province and six of his bodyguards on Sunday, security officials said, in an attack that was later claimed by a local Islamic State (ISIS) affiliate.

Gov. Gaafar Mohamed Saad was traveling to his office when the explosion struck his convoy in the southern port city. Authorities are investigating the exact cause of the explosion. The officials spoke on condition of anonymity because they were not authorized to brief the media.

An ISIS affiliate claimed the attack in a statement circulated online by supporters, saying the bomb was concealed in a parked car along the convoy’s route. The group referred to Saad as a “tyrant” and warned the “heads of the infidels” in Yemen that it would carry out “operations to chop off their rotten heads.”

ISIS has claimed a series of bombings that killed 159 people and wounded 345 this year in Yemen, according to an Associated Press count.

The extremists have been able to expand their reach in the chaos of Yemen’s larger conflict, between a loose array of pro-government forces backed by a Saudi-led coalition and Shiite Houthi rebels, who control the capital, Sanaa, and large parts of northern Yemen. Pro-government forces drove the Houthis out of Aden earlier this year.

A local al-Qaida affiliate has exploited the chaos to seize territory in Yemen’s south and east, and has a growing presence in Aden. On Saturday, masked gunmen in Aden killed a military intelligence official and a judge known for sentencing al-Qaida militants. No one claimed those attacks.