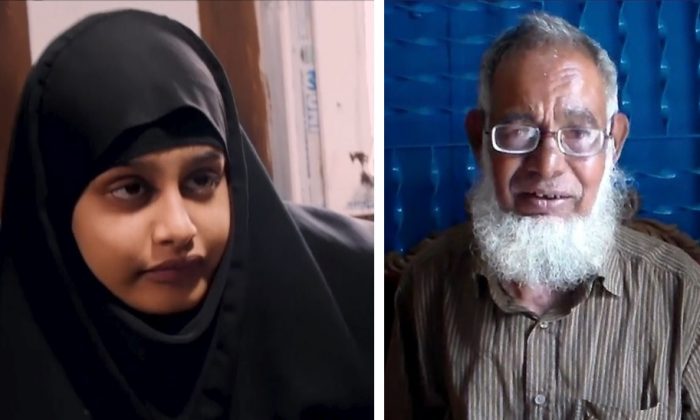 Schoolgirl ISIS bride Shamima Begum has been granted taxpayer-funded legal assistance in her bid to overturn the decision to revoke her British citizenship—even though she hasn’t asked for it.

Begum travelled to Syria at the age of 15 from the UK to join the so-called caliphate.

Her citizenship was revoked by the Home Secretary following a series of interviews she gave from a refugee camp in which she expressed little remorse but said she wanted to return to the UK.

Her family filed a legal appeal to restore her citizenship, and according to the BBC, lawyers have now successfully applied for funding to fight her case.

The decision has been slammed by some lawmakers, who are demanding a change to the rules, which allowed lawyers to successfully apply for potentially hundreds of thousands of pounds to fight for Begum’s return to the UK without receiving any formal instruction from her.

The British legal system allows anyone who is a plaintiff in a British court–whether they are a citizen or not—to apply for legal funding if they cannot afford a lawyer.

According to the BBC, the case could last for years.

“Cases before the Special Immigration Appeals Commission (SIAC) are among the most complicated legal challenges that the government can face,” said BBC Home Affairs correspondent Dominic Casciniani.  “This is because they typically involve a complex combination of MI5 intelligence reports, which cannot be disclosed to the complainant, and long-standing law on achieving a fair hearing.”

Tory MP Tim Loughton, former chairman of the home affairs select committee, told the Daily Mail, “Playing the victim card when she has clearly been an active and willing participant in the most barbaric terrorist organisation in the world has now been exposed for the lie it was and the UK should have nothing to do with her.”

Tory MP Philip Davies told the paper, “It’s absolutely disgusting how we are funding this person who is someone who joined an organisation that wants to destroy our way of life and our country.”

Foreign Secretary Jeremy Hunt told the BBC, “On a personal level, it makes me very uncomfortable because she made a series of choices and she knew the choices she was making.”

“However, we are a country that believes that people with limited means should have access to the resources of the state if they want to challenge the decisions the state has made about them and, for obvious reasons, those decisions are made independent from politicians, he said.”

Begum traveled to Syria as a schoolgirl, aged just 15, from her home in London. She gave birth in a Kurdish refugee camp, after sparking controversy with a number of interviews.

In her interviews, she indicated she wanted to return to the UK but expressed little remorse or indication that she had shed the caliphate’s ideology.

The lawyer’s claim to legal aid money comes the day after a report by the Sunday Telegraph claimed she was a member of the dreaded ISIS “morality police.”

Begum worked for al-Hisba, according to sources who told the paper she enforced the terror cult’s strict dress code with an AK-47 she carried with her and had a reputation as a strict enforcer.

The Telegraph quoted an activist who recounted how Begum allegedly shouted at Syrian women in the city of Raqqa for wearing brightly colored shoes.

Aghiad al-Kheder, an activist who documents ISIS crimes, told the publication, “Members of our group from Raqqa knew her well.”

The report also claims Begum played a part in persuading other women to join the jihadi cause.

“Don’t believe any of the bad things you hear about Dawla [the ISIS caliphate], it’s fake. You have everything you want here,” she told a potential recruit in a message reported on by the Telegraph. “And we can help find you a good-looking husband.”

A Legal Aid Agency spokesman told the Daily Mail: ‘We are unable to comment on individual cases. Anybody applying for legal aid in a Special Immigration Appeal Commission case is subject to strict eligibility tests.’