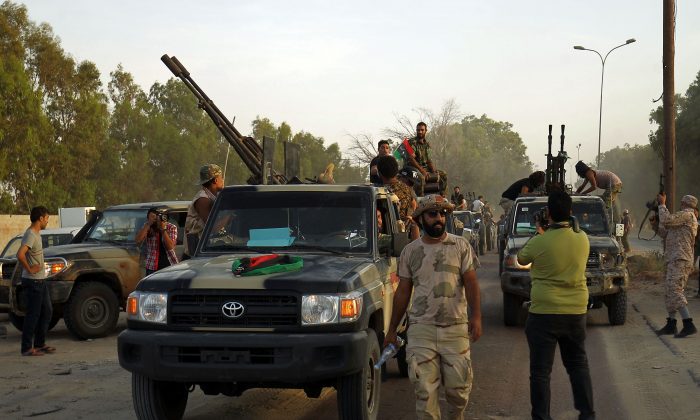 Members of the Salah Bou-Haliqa brigade, loyal to the country's east strongman Khalifa Haftar's self-styled Libyan National Army, celebrate as they arrive in the eastern city of Benghazi after seizing the central al-Jufra area from the Benghazi Defence Brigades coalition, a rival to Haftar's forces on June 5, 2017. (ABDULLAH DOMA/AFP/Getty Images)
Africa

ISIS Blamed for 11 Beheadings in Libya

The ISIS terrorist group is being blamed for the beheading of at least 11 people at a checkpoint in Libya—two civilians and nine soldiers loyal to the Libyan National Army (LNA).

The attack took place in the central district of al-Jufra, about 400 miles southeast of Tripoli and some 220 miles south of the coastal city of Sirte, which ISIS held until late last year when it was pushed out by Libyan forces.

No one has claimed responsibility for the killings, but according to Agence France-Presse (AFP), LNA spokesman Col. Ahmed al-Mesmari claimed ISIS was behind it.

Analysts and military sources say ISIS remains active in Libya, particularly in the south, despite losing its stronghold, AFP reports.

After dictator Moammar Gadhafi was thrown out of power and killed in a 2011 uprising, Libya sank into chaos.

Jihadists and human and arms traffickers have gone rampant in Libya as multiple authorities and dozens of militias vie for control.