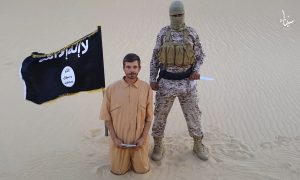 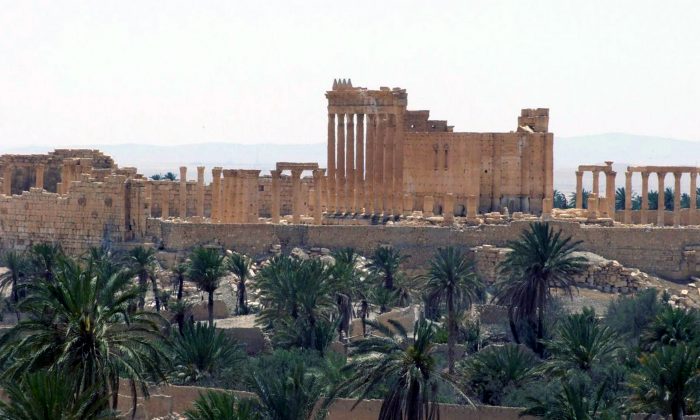 This photo released on Sunday, May 17, 2015, by the Syrian official news agency SANA, shows the general view of the ancient Roman city of Palmyra, northeast of Damascus, Syria. (SANA via AP)
Middle East

DAMASCUS, Syria—ISIS extremists beheaded one of Syria’s most prominent antiquities scholars in the ancient town of Palmyra, then hung his body from one of the town’s Roman columns, Syrian state media and an activist group said Wednesday.

The killing of 81-year-old Khaled al-Asaad was the latest atrocity perpetrated by the extremist group, which has captured a third of both Syria and neighboring Iraq and declared a self-styled “caliphate” on the territory it controls.

Since ISIS overran Palmyra in May, there have been fears the extremists, who have destroyed famed archaeological sites in Iraq, would demolish the 2,000-year-old Roman-era city at the edge of the town — a UNESCO world heritage site and one of the Mideast’s most spectacular archaeological sites.

The Sunni extremist group, which has imposed a violent interpretation of Islamic law, or Shariah, believes ancient relics promote idolatry. ISIS extremists claim they are destroying ancient artifacts and archaeological treasures as part of their purge of paganism. The destruction ISIS has wreaked adds to the wider, extensive damage it has inflicted on ancient sites, including mosques and churches across Syria and Iraq.

According to Syrian state news agency SANA and the Britain-based Syrian Observatory for Human Rights, al-Assad was beheaded on Tuesday in a square outside the town’s museum. The Observatory, which has a network of activists on the ground in Syria, said dozens of people gathered to witness the killing. Al-Asaad had been held by the IS for about a month, it added.

The killing of 81-year-old Khaled al-Asaad was the latest atrocity perpetrated by the extremist group, which has captured a third of both Syria and neighboring Iraq

His body was then taken to Palmyra’s archaeological site and hung from one of the Roman columns, Maamoun Abdulkarim, the head of the Antiquities and Museums Department in Damascus, told SANA.

Al-Asaad was “one of the most important pioneers in Syrian archaeology in the 20th century,” Abdulkarim said. ISIS had tried to extract information from him about where some of the town’s treasures had been hidden to save them from the militants, the antiquities chief also said.

SANA said al-Asaad had been in charge of Palmyra’s archaeological site for four decades until 2003, when he retired. After retiring, al-Asaad worked as an expert with the Antiquities and Museums Department.

The Sunni extremist group, which has imposed a violent interpretation of Islamic law, or Shariah, believes ancient relics promote idolatry

Al-Asaad, who held a diploma in history and education from the University of Damascus, wrote many books and scientific texts either individually or in cooperation with other Syrian or foreign archeologists, SANA said. Among his titles are “The Palmyra sculptures,” and “Zenobia, the Queen of Palmyra and the Orient.”

He also discovered several ancient cemeteries, caves and the Byzantine cemetery in the garden of the Museum of Palmyra, the agency added.

“Al-Asaad was a treasure for Syria and the world,” Khalil Hariri, al-Asaad’s son-in-law who works at the Palmyra’s archaeological department told The Associated Press, speaking over the phone from the central Syrian city of Homs. “Why did they kill him?”

“Their systematic campaign seeks to take us back into pre-history,” he added. “But they will not succeed.”

Hariri, who is married to al-Asaad’s daughter, Zenobia, said his father-in-law had been a member of President Bashar Assad’s ruling Baath party since 1954. Hariri added that al-Asaad is survived by six sons and five daughters.

Since falling to ISIS, Palmyra’s ancient site has remained intact but the militants destroyed a lion statue in the town dating back to the 2nd century. The statue, discovered in 1975, had stood at the gates of the town museum, and had been placed inside a metal box to protect it from damage.

In early July, ISIS released a video showing the killing of some 20 captured government soldiers in Palmyra’s amphitheater. They were shot dead by young ISIS members, armed with pistols. Hundreds of people were seen watching the killings.

The Britain-based Syrian Observatory for Human Rights said the explosion happened outside a local Kurdish police station in the town of Qamishli. It also said more than 40 people were wounded in the blast. Syria’s state news agency SANA also reported the explosion, saying it killed 13 and wounded about 50.

The ISIS group has been fighting Kurdish fighters in Syria since last year and the extremists have carried out dozens of suicide attacks against the Kurds. The Kurdish fighters, aided by U.S.-led airstrikes, have also captured significant territory from ISIS in northern Syria.