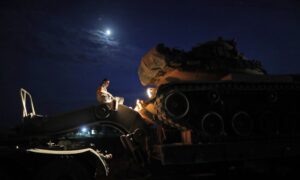 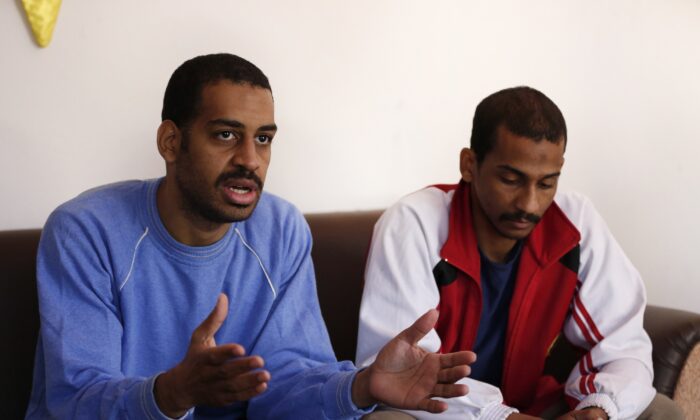 ISIS ‘Beatles’ Taken Into Custody by US Military, Might be Handed Over to Iraq

The two ISIS terrorists known as part of the “Beatles” were transferred from a Syrian prison to United States military custody amid America’s exit from Syria.

Nearly 50 other militants were slated to be handed over to Iraq on Oct. 10, Iraqi intelligence officials said.

They spoke on condition of anonymity because they were not authorized to brief the media. They declined to provide details or say whether they included two British militants who were moved out of a detention center in Syria and were now in U.S. custody, according to U.S. officials.

President Donald Trump announced earlier this week that the U.S. military would leave Syria, citing his campaign promise to end “endless wars.” Trump said early Thursday that the U.S. military took “the 2 ISIS militants tied to beheadings in Syria, known as the Beetles [sic], out of that country and into a secure location” controlled by the United States.

“They are the worst of the worst!” he said about the terrorists. The custody transfer was undertaken in case the Kurds or Turkey “lose control” of the area, Trump said.

The men in question, El Shafee Elsheikh and Alexanda Amon Kotey, are part of a group of ISIS “Beatles.” The group became known for their British accents.

The group held over 20 hostages in 2014 and 2015, torturing some of them and beheading American journalist James Foley, among others.

Mohammed Emwazim, the head of the group, known as Jihadi John, who allegedly carried out the beheadings, was killed in a drone strike in 2015.

According to the State Department, Kotey was a prison guard for the cell that held prisoners due to be executed. He “likely engaged in the group’s executions and exceptionally cruel torture methods, including electronic shock and waterboarding,” the department said in its listing of terrorism sanctions for the men.

The department said Elsheikh “earned a reputation for waterboarding, mock executions, and crucifixions while serving as a jailer.”

The United Kingdom has revoked the citizenship of both Kotey and Elsheikh, prompting complaints from the men. They lashed out at the media in an interview, blaming outlets for spreading allegations against the “Beatles” group.

They said the stripping of their British citizenship was “illegal,” with Elsheikh saying the decision leads to them “being taken to any foreign land and treated in any way and having nobody to vouch for you.”

Trump said on Wednesday that America was taking “a certain number of ISIS fighters that are particularly bad” from Syria to ensure they remained in detention.

“We are taking some of the most dangerous ISIS fighters out,” Trump told reporters during an event in Washington. “We’ve taken them out, and we’re putting them in different locations where it’s secure.”

Some of the terrorists hail from various European nations while others are from America or other Western countries.

Trump said earlier this week that the military defeated the ISIS caliphate, an operation that included capturing “thousands of ISIS fighters, mostly from Europe.”

European countries refused to take back nationals that were fighting for ISIS and tried to force the United States to keep them, Trump alleged. He said he didn’t want America to pay to hold them in U.S. prisons.

Citing the U.S. troop withdrawal, Trump said: “Turkey, Europe, Syria, Iran, Iraq, Russia and the Kurds will now have to figure the situation out and what they want to do with the captured ISIS fighters in their ‘neighborhood.'”