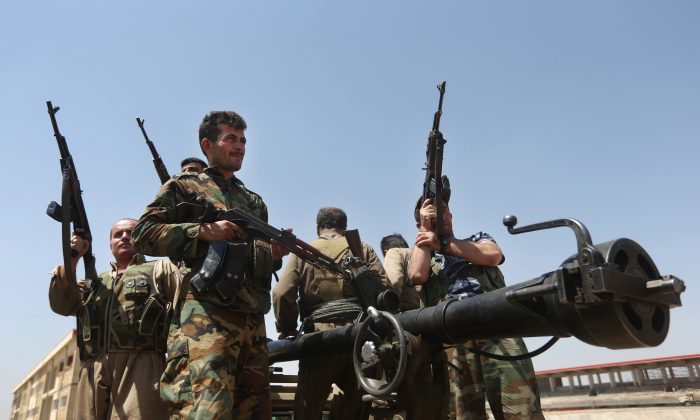 In this Wednesday, June 25, 2014 file photo, Kurdish peshmerga fighters take positions on the front line with militants from the al-Qaida-inspired Islamic State in Iraq and the Levant (ISIL), in Tuz Khormato, 100 kilometers (62 miles) south of the oil rich province of Kirkuk, northern Iraq. (AP Photo/Hussein Malla, File)
US

An ISIS attack in Texas may be “imminent,” according to a watchdog group.

Judicial Watch issued the warning this week based on intelligence that the group has been operating in Mexican border cities.

“Islamic terrorist groups are operating in the Mexican border city of Ciudad Juarez and planning to attack the United States with car bombs or other vehicle borne improvised explosive devices (VBIED). High-level federal law enforcement, intelligence and other sources have confirmed to Judicial Watch that a warning bulletin for an imminent terrorist attack on the border has been issued,” it said.

“Agents across a number of Homeland Security, Justice and Defense agencies have all been placed on alert and instructed to aggressively work all possible leads and sources concerning this imminent terrorist threat.”

“Specifically, the government sources reveal that the militant group Islamic State of Iraq and Greater Syria (ISIS) is confirmed to now be operating in Juarez, a famously crime-infested narcotics hotbed situated across from El Paso, Texas,” it added.

“Violent crimes are so rampant in Juarez that the U.S. State Department has issued a number of travel warnings for anyone planning to go there. The last one was issued just a few days ago.”

ISIS is notorious for its terrorist activities across the Middle East but has been venturing to new parts of the world such as Russia recently.

The King of Saudi Arabia recently warned that Europe and the United States are on the ISIS hit list.

King Abdullah of Saudi Arabia said last week that the group sweeping through the Middle East will target the West directly unless there is “rapid” action.

“If we ignore them, I am sure they will reach Europe in a month and America in another month,” he said in remarks quoted by Asharq al-Awsat daily.

“Terrorism knows no border and its danger could affect several countries outside the Middle East,” he told new ambassadors at a ceremony, including a new envoy from the U.S., a Saudi ally.

The king said lack of action is “unacceptable” while noting the “cruelty” of the group.

“You see how they (jihadists) carry out beheadings and make children show the severed heads in the street,” he said. “It is no secret to you, what they have done and what they have yet to do. I ask you to transmit this message to your leaders: ‘Fight terrorism with force, reason and (necessary) speed’.”

U.S. lawmakers said that they also believe that ISIS is eyeing cities in the United States and Western Europe.

Without offering specifics on any threats or suggestions on how to confront them, the leaders of the Senate and House intelligence committees on Sunday prodded the White House to work to prevent the Islamic State extremists from launching attacks on U.S. soil. The bipartisan pair of lawmakers shared a dire warning about the Islamic State group, which now has control of vast swaths of Syria and Iraq, has killed civilians from that region and beheaded American journalist James Foley.

“This is a group of people who are extraordinarily dangerous,” said Sen. Dianne Feinstein, the California Democrat who leads the Senate intelligence panel. “And they’ll kill with abandon.”

In a separate TV interview, the leader of the House Intelligence Committee warned the leaders of the Islamic State, sometimes called ISIL or ISIS, are looking for a spectacular attack that would help them raise money and recruit more fighters.

“ISIL would like to have a Western-style attack to continue this notion that they are the leading jihadist group in the world,” said Rep. Mike Rogers, R-Mich.

The pair of lawmakers, who have access to some of the nation’s most sensitive secrets and receive regular detailed briefings from the nation’s spy agencies, offered dire predictions of an attack on the United States or its European allies if the militants are not confronted.

“I’m very concerned because we don’t know every single person that has an American passport that has gone and trained and learned how to fight,” Rogers said.

“he disturbing inside intelligence comes on the heels of news reports revealing that U.S. intelligence has picked up increased chatter among Islamist terror networks approaching the 13th anniversary of the 9/11 attacks. While these terrorists reportedly plan their attack just outside the U.S., President Obama admits that ‘we don’t have a strategy yet’ to combat ISIS.’I don’t want to put the cart before the horse,’ the commander-in-chief said this week during a White House press briefing. ‘I think what I’ve seen in some of the news reports suggest that folks are getting a little further ahead of what we’re at than what we currently are.’

“The administration has also covered up, or at the very least downplayed, a serious epidemic of crime along the Mexican border even as heavily armed drug cartels have taken over portions of the region. Judicial Watch has reported that the U.S. Border Patrol actually ordered officers to avoid the most crime-infested stretches because they’re ‘too dangerous’ and patrolling them could result in an ‘international incident’ of cross border shooting. In the meantime, who could forget the famous words of Obama’s first Homeland Security Secretary, Janet Napolitano; the southern border is ‘as secure as it has ever been.’ These new revelations are bound to impact the current debate about the border crisis and immigration policy.”