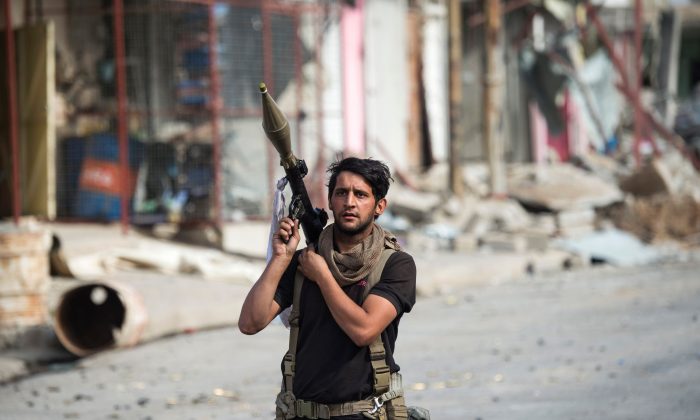 A soldier of the Iraqi special forces carries a rocket propelled grenade as he prepares for a suicide bomb vehicle that was reported to be moving toward their position in Mosul, Iraq, on Nov. 14. (ODD ANDERSEN/AFP/Getty Images)
International

ISIS After the ‘Caliphate’

If ISIS loses its strongholds in Mosul and Raqqa, what will happen to the terror group?
By Joshua Philipp

Iraqi forces, with U.S. assistance, are currently fighting the ISIS terrorist group for control of Mosul. And in Syria, various forces, including Syrian government troops with the aid of Russia, are preparing to push ISIS out of Raqqa.

When the smoke clears, ISIS will have likely lost its two main bases, and with them, the foundation of its identity: the so-called Islamic “caliphate.” The questions hanging over the terrorist organization now are how it will fund itself without its strongholds, where it will go next, and what it will become.

Its extreme violence has already alienated the group from other terrorist groups, and even drug cartels will be reluctant to work with it, say experts. Without territory—and without the money and support it brings—ISIS faces extinction, though it’s not expected to disappear entirely.

ISIS built its identity—and prophetic credibility—around the fact that it held territory. Hence, the name “Islamic State in Iraq and Syria” and later just the “Islamic State.”

“Their draw was the fact they had territory that was defined and where people could come and join—to see what it’s like living in an Islamic state,” said Paul Rexton Kan, professor of national security at the U.S. Army War College.

After ISIS loses its territory, Kan said, its name will become more of a joke—a painful reminder of what it lost.

There is speculation ISIS could shift operations to Libya, where it still holds some power, or to Yemen, where it has pockets of support. But neither are within the Levant, nor have the same historical significance.

Kan said there’s a chance that ISIS could shift to areas like Jordan or Lebanon where it can try to radicalize refugees. There are also terrorist and militia groups that have sworn allegiance to ISIS as far away as the Philippines.

ISIS may also do none of the above, he said. It may stay in Syria and focus on drawing the United States into a “last battle” in Dabiq—the main location in an apocalyptic prophecy the group is based around. The main ISIS propaganda magazine is named after Dabiq, a Syrian town near the Turkish border.

“The reason you have this ‘state,'” Kan said, “is not just to draw people in, but the ultimate spiritual objective is to bring Western forces into this town.”

According to Drew Berquist, founder of OpsLens and a former intelligence contractor, the other question is how ISIS will fund itself.

“Losing all the taxes and the oil, that will crush them, that will be the biggest blow,” he said.

ISIS also receives money from wealthy financiers—supporters who believe in its ideology.

“I think that will dry up too, because they may think the group is losing momentum,” said Berquist.

Even the black market may have its doors closed to the group. The organized drug trade, in particular is “nasty, dirty, violent business—but with limits,” Berquist said. “Cartels, some of them won’t go so far in terms of violence or who they’re dealing with, because they kind of know the tipping point on the government.”

That could apply to any national government where cartels operate. Many drug cartels, he said, won’t do business with terrorist groups because they know it will draw the attention of the U.S. government, in particular.

A Government No More

Meanwhile, without its strongholds, ISIS may not fare so well on its own turf. Among jihadists, ISIS and al-Qaeda are competing for support and credibility. Al-Qaeda views ISIS as excessively violent.

Given the tribal influence in many areas the groups operate in, the ability to move troops, influence local politics, recruit fighters, and raise funds are all heavily influenced by credibility.

Without its territory, ISIS will lose the foundation of its support and credibility.

The chances of ISIS maintaining the kind of political influence that groups like the Taliban and Hezbollah wield are slim-to-none after it loses its territory, since it treated civilians in its territory with far too heavy a hand.

Many ISIS fighters will likely try to return to their homes or hide among fleeing civilians. At that point, ISIS may continue to exist in scattered pockets of support.

“They will become like most groups in the first place—an ideology,” Berquist said.

He added, “I also don’t foresee them going away.”