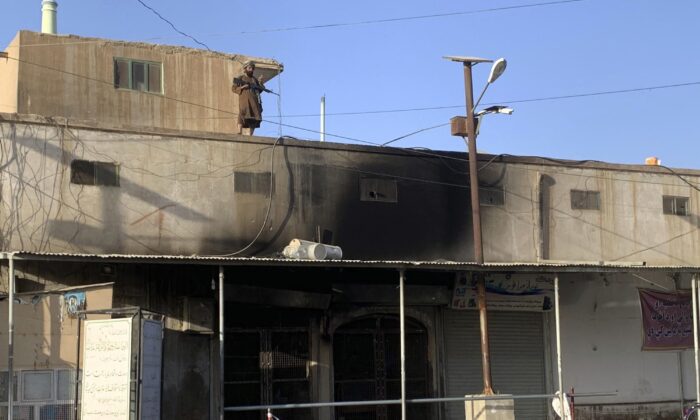 A Taliban fighter stands guard on the top of a mosque following a suicide bomber attack in the city of Kandahar, Afghanistan, on Oct. 15, 2021. (Sidiqullah Khan/AP Photo)
Afghanistan

An affiliate of the ISIS terrorist group is now present in nearly all 34 provinces in Afghanistan, the U.N. envoy to the country said on Nov. 17.

Addressing the U.N. Security Council, Special Representative of the Secretary-General for Afghanistan Deborah Lyons said ISIS-K, also known as ISKP, has expanded dramatically in the country since its capital city of Kabul was seized by the Taliban terrorist group in August.

The Taliban took full control of Afghanistan on Aug. 15, after the U.S.-backed Afghan government had fled the country.

ISIS-K is the branch of the ISIS terrorist group that’s active in Afghanistan. The group, which formerly had a presence in just a few Afghan provinces, now appears to have expanded to nearly all provinces, according to Lyons.

The Taliban’s response to the group’s expansion “appears to rely heavily on extrajudicial detentions and killings” of suspected ISIS-K fighters, she said.

“This is an area deserving more attention from the international community,” Lyons told the U.N. Security Council.

Her comments came hours after the group—an ideological foe of the Taliban—claimed responsibility for two blasts that killed at least one person and wounded six others in a heavily Shiite Muslim neighborhood in Kabul.

Lyons said the Taliban has been unsuccessful in stemming ISIS-K’s expansion, noting that the group has become “increasingly active.” The number of attacks carried out by ISIS-K has increased to 334 in 2021 from 60 attacks in 2020, according to Lyons.

Her comments come weeks after a top Pentagon official warned that ISIS-K could launch international attacks in as soon as six months.

In testimony to the Senate Armed Services Committee on Oct. 26, Defense Department Undersecretary for Policy Colin Kahl said ISIS-K and the al-Qaeda terrorist group both want to carry out international attacks, but currently don’t have the capability to do so.

“I think the intelligence community assesses that both ISIS-K and al-Qaeda have the intent to conduct external operations, including against the United States. But neither currently has the capability to do so,” Kahl said. “We could see ISIS-K generate that capability in somewhere between six or 12 months. I think the current assessments by the intelligence community is that al-Qaeda would take a year or two to reconstitute that capability.”

Kahl said the goal is to “be vigilant in disrupting” ISIS and al-Qaeda so they can’t develop the capability to attack the United States.

ISIS-K claimed responsibility for the terrorist attack at Kabul’s International airport on Aug. 26 that resulted in the deaths of 13 U.S. troops and 170 Afghan civilians amid evacuation efforts. It has also since said it was behind a number of other attacks in Afghanistan, including several bombings that have killed dozens of civilians.