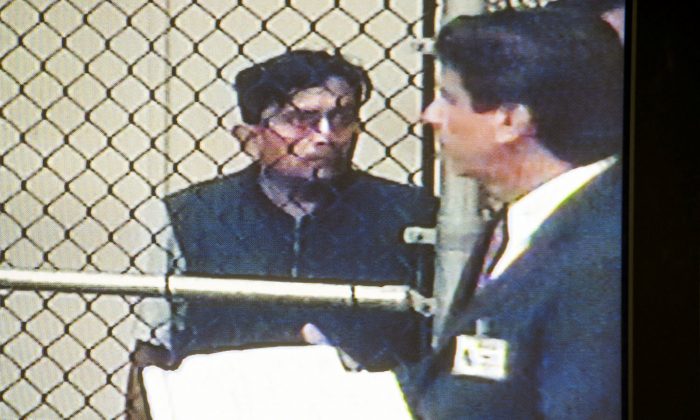 Isidro Garcia talks with his attorney Charles Frisco as he appears on video during his arraignment at the Orange County jail in Santa Ana, Calif. Garcia stands trial on charges of rape, kidnapping and lewd acts on a child, in an Orange County courtroom on Thursday, Feb. 11, 2016. May 22, 2014(Ken Steinhardt/The Orange County Register via AP, File)
US

UPDATE: FULLERTON, Calif.—A prosecutor is urging Southern California jurors to look beyond the appearance of a happy marriage in the case of a man charged with abducting and raping a 15-year-old girl who stayed with him for a decade.

In opening statements Thursday, prosecutor Whitney Bokosky says the girl remained with Isidro Garcia out of fear until she finally went to the police in 2014.

Neighbors in Orange County have said they saw only a happy couple with a daughter.

But authorities say Garcia brought the girl to California from Mexico in 2004, and over the years he beat her and warned that she’d be arrested and deported if she tried to leave.

Garcia has pleaded not guilty to rape, kidnapping and lewd acts on a child. He could face a life sentence if convicted.

Isidro Garcia, a 41-year-old Bell Gardens, Calif. man, was arrested after allegedly kidnapping and holding a woman captive for 10 years.

The woman, who is now 25, came to police with her story, Santa Ana police told KTLA.

The victim contacted police about a decade after she was reported missing by her mother, the station reported.

Garcia was taken into custody on Tuesday on suspicion of kidnapping, rape, and related charges.

The victim says that she was 15 years old in 2004 when she was taken by Garcia. She allegedly went missing after a “domestic violence incident,” the station said.

“The victim said in June of 2004, while living with her mother and sisters at 811 S. Fairview in Santa Ana, Isidro Garcia began sexually assaulting her. In August of 2004, after Garcia assaulted her mother, Garcia drugged the victim and drove her to a house in Compton. There, Garcia provided the victim with falsified identity documents and locked her overnight in a garage to prevent the victim from fleeing,” reads a news release from the Santa Ana Police Department.

The department added: “Over the course of the following months and years, Garcia repeatedly told the victim her family had given up looking for her, and if she tried to go back to them, the family would be deported. The two moved on several occasions to avoid police detection. Garcia frequently physically and sexually assaulted the victim. Garcia arraigned for the two of them to receive employment at a night cleaning service, so he could keep a close eye on the victim. “

The victim recently contacted her sister via Facebook and gained the courage to contact police, the release reads.