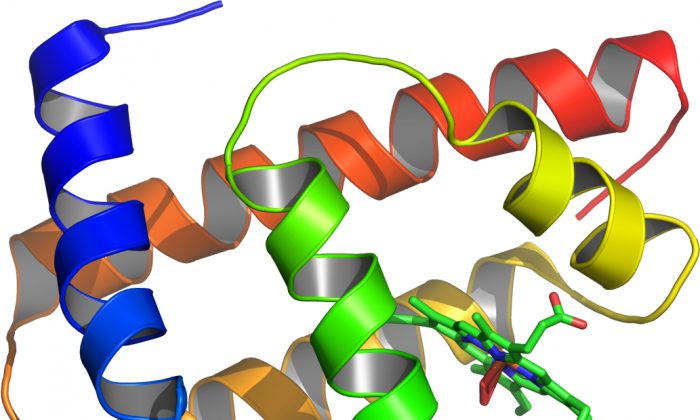 After being heated, the protein myoglobin can refold its long amino-acid chains in the absence of water, new research has shown. (AzaToth/Wikimedia Commons)
Beyond Science

Is Water Essential for All Life?

When proteins are heated up, their long chains of molecules unfold, rendering them unable to perform functions vital for life, such as converting food to energy or transmitting oxygen to the blood. Water was previously thought to be essential for protein molecules to function and refold after they are cooled back down.

New research by the U.K.’s University of Bristol has shown a certain protein—myoglobin, found in red blood cells—can refold in the absence of water.

“Our results challenge the existing paradigm on the role of water molecules in protein folding and function,” Dr. Adam Perriman of Bristol’s School of Chemistry told The Epoch Times in an email. “It is an extremely complex problem and involves virtually all of the types of chemical bonds, which in turn are all affected by water.”

The unfolding of proteins is called denaturing, and occurs when they are heated. A classic example is boiling an egg, where the proteins in the egg unfold and stick together, making the egg solid. The process cannot be reversed in eggs, but some proteins can reform their original structure on cooling.

In the 1990s, researchers showed that buckyballs, carbon in a chemical structure resembling soccer balls, had no liquid phase. That is, “if you heat up a dry sample of this material, it will sublime and form a gas. Alternatively, if you cool the gas it will form a solid,” Perriman explained. “This unprecedented phenomenon arose because of the nanoscale dimensions of the buckyballs. Proteins are also nanoscale objects and accordingly, have no liquid phase.”

Perriman and colleagues re-engineered the surface of the oxygen-carrying molecule myoglobin using polymer surfactants so the protein had the ability to “melt,” and removed all traces of water molecules from around it.

“When I realized that the protein structure was still intact in the absence of water (or any solvent for that matter), I decided to see if the protein could be unfolded thermally, and even refold when cooled,” Perriman said. “This was the case.”

The researchers used a technique called circular dichroism at the Diamond Light Source synchrotron science facility in Oxfordshire to observe how the structure of the modified myoglobin changed as they heated it. They found that the protein remained stable up to a much higher temperature than is seen in nature.

These findings could be useful in developing industrial enzymes with a high thermal resistance, where environmental conditions can be harsh, Perriman said. “One of our key results was the very large increase in the protein stability. Moreover, our liquid proteins have extremely high protein concentrations, which would also be advantageous.”

Other applications could include a smart wound dressing that could be “applied from a can as an aerosol,” Perriman said. “At this stage, the work is very new, but we do have some new systems on the horizon involving more industrially relevant enzymes.”

The findings were published online in the journal Chemical Science.