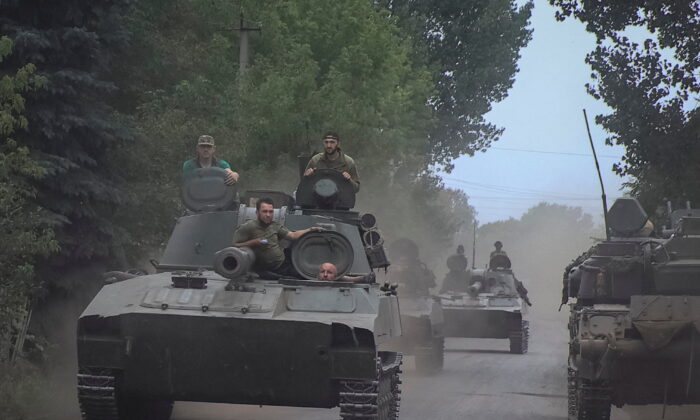 Is This the Time to Try to End the War?

By any traditional criteria, it’s obvious that the Ukraine war is now ready for serious negotiations. The whole world knows that there are millions of Ukrainian refugees, that Russia has occupied approximately 20 percent of the country, though its possession of that is tenuous and severely contested, and that the physical destruction wrought in what was in many respects already an underdeveloped country, has been terrible.

Despite the customary bravura from the Kremlin, it can’t be disguised that the material cost to Russia of this ill-considered invasion is extremely serious and, over time, will not be sustainable. Russia has more than three times the population of Ukraine, but the Ukrainians entirely endorse a general mobilization, and the whole able-bodied adult population appears not only willing but also enthusiastic to fight for their independence.

The only basis upon which Russia could militarily exploit its demographic advantage would be a general mobilization that the country could not long afford and even the long-suffering masses of Russia would probably not tolerate, even though they only rise in revolt approximately every 300 years despite the endless provocations of monstrous misgovernment.

As Charles de Gaulle wrote of Stalin, after 18 hours of often confrontational discussion with him in 1944, it could also be said of the current Russian leader, Vladimir Putin, that it is his good fortune “to have found a people so vital and so patient that the worst servitudes did not paralyze them, [and] a soil full of such resources that the most terrible destruction and waste could not exhaust it.”

Obviously, the individuals and the circumstances can be easily distinguished: In World War II the Russians were defending their homeland as the Ukrainians are now, and so important was the Russian war effort to the Western democracies that the two greatest leaders democracy has had since Abraham Lincoln—Winston Churchill and Franklin D. Roosevelt—overcame their reservations about Stalin and embraced him as the least costly method available of disposing of Hitler and Nazism. But it remains true that the Russian people will tolerate a great deal more than any entirely Western nationality would, in enduring the discomforts of a completely avoidable aggressive war.

While public opinion in Russia is always hard to discern and mobilize and is subject to authoritarian repression on a scale and frequency that would be unacceptable in the West, it may be reasonably assumed that if Putin thought that he could afford, financially and in terms of his own credibility with the Russian public and in the corridors of the Kremlin, to conduct a general mobilization and insert an overwhelming number of (newly recruited and highly unenthused) soldiers into Ukraine, he would do that.

As of now, despite the unequal correlation of forces between the two combatants, Ukraine has a substantial advantage in both the number and morale of readily available and at least partially trained soldiers, and the great majority of the material costs of supplying and conducting such a war are being borne by NATO. In this conflict, Russia has no allies of any utility, and the more it commits to this war, the more dangerously dependent upon China it becomes.

Unless Putin has taken complete leave of his senses—and despite some of the Biden administration’s early rhetoric, there’s no evidence that he has—he wants a peace but not one that fits the flippant Biden administration formulation that “Russia must be defeated and must be seen to be defeated.” That outcome doesn’t coincide with the correlation of forces, and what’s needed is a settlement that doesn’t reward Russia for its aggression but does recognize its historic affiliation with the Russian-speaking population of Ukraine. And in exchange for this, Ukrainian heroism must be rewarded with unambiguous and universally recognized independence, in which Ukraine joins Europe and the West, and instead of a military alliance, its revised borders are unconditionally guaranteed by all of its neighbors: the entire North Atlantic alliance and Russia and the other neighboring republics of the former Soviet Union.

The Russian government is going to great lengths to try to hide the extent of the economic damage it has suffered, but unemployment is almost certainly at least 30 percent (about where it was in the United States at the bottom of the Great Depression in 1933), exports other than petroleum products have practically vanished, imports of vital goods have shrunk by half, and the apparent robustness of the ruble and the stock exchange are fraudulent. Foreigners can’t sell their equities on the Russian stock exchange, and the ruble has effectively ceased to be a transactional currency within Russia itself. The Russian social safety net is completely inadequate to deal with such hardships, and those most discomforted are the relatively new class of authentic capitalists who are in a position to be much more troublesome and demonstrative than the ancient stoical Slavonic masses whom Stalin and most of the Czars tyrannized.

The recent grain deal between Ukraine and Russia, and probably the incitement to brokering peace that Hungarian Prime Minister Viktor Orban tried to give the Republicans at the CPAC meeting in Dallas on Aug. 4, and even the rather desultory fashion in which Russia is conducting the war, all indicate that it’s seeking a compromise peace. Horrible and outrageous though the invasion of Ukraine is, if the entire Russian capability of raining bombs, missiles, and heavy artillery down on Ukraine were unleashed, the human and material damage would be vastly greater than it is.

However purposeful Ukrainian President Volodymyr Zelenskyy may be, he would accept a peace with reliable national security assured and with an extensive reconstruction aid promise from the West, and he would accept the results of an authentic referendum to ascertain whether the Russian-speaking areas of Ukraine wish to remain in Ukraine or join Russia (not a farce such as Putin conducted in Crimea in 2014).

Whatever the results of such a plebiscite, Zelenskyy has brilliantly led his people out of the shadow of reabsorption under the heel of Russia and written a heroic epic of independence. From being glibly offered a safe flight for himself and his family from the anticipated Russian military walkover by President Joe Biden in the first days of the war, he will have established Ukraine for the first time in all of its history as an unquestionably independent state, unshakably anchored in the Western world. If the United States doesn’t move to broker such an arrangement, some combination of the French and German leaders and the incoming British prime minister will. Peace can be had and the opportunity must be seized.