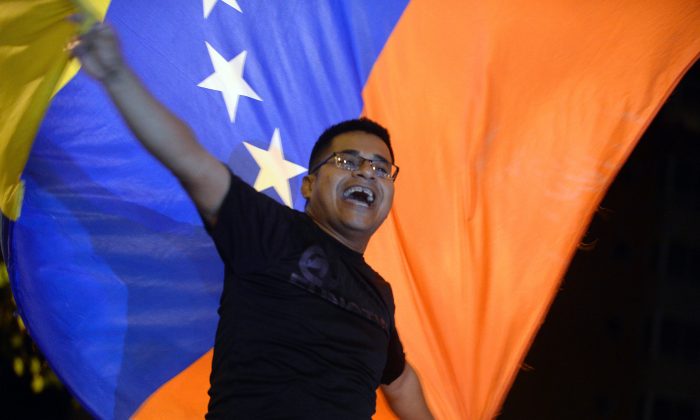 Venezuelan opposition supporters celebrate the results of the legislative election in Caracas, on Dec. 7, 2015. Venezuela's opposition won at least a majority of 99 out of 167 seats in the state legislature, electoral authorities said Monday, the first such shift in power in congress in 16 years. (Federico Parra/AFP/Getty Images)
Americas

An alliance of center-left, centrist, and right-wing opposition parties has scored a resounding victory in Venezuela’s parliamentary elections—marking a seismic shift for the country.

Breaking two decades of dominance by the socialist government, the Democratic Unity alliance has won the vast majority of seats, after promising economic and social change.

The government will stay on because President Nicolás Maduro holds executive power, but the sizable majority won by the opposition is a strong signal that a recall referendum could take place in 2016.

The current government has terrible approval ratings, as does President Maduro personally.

The vote was held to elect the 167 members of the national parliament for 2016–2020—but more was at stake too. It was a test of the political strategies of two very polarized political groups.

The current government has terrible approval ratings, as does Maduro personally. The economy is in recession and inflation could be as high as 100 percent. There are shortages of food, medicine, and other basic necessities, and insecurity and corruption are at an all-time high.

The government’s response to economic recession, inflation, and shortages has been to seek control of the media and to persecute opposition politicians and business people.

The government’s response to these problems has been to seek control of the media and to persecute opposition politicians and business people. Poorer citizens—who are traditionally more likely to support the socialist government—are also feeling the strain, having lost the extra privileges afforded to them under former President Hugo Chávez, such as extra educational support, health missions, and food markets.

Conscious that the situation for the poor has deteriorated since Chávez died in 2013, the government used the late president’s image as often as possible in the election campaign. Maduro, it is widely acknowledged, cannot hold a flame to his predecessor.

Basing an election campaign on the past might have worked if the current economic situation had been better, given that many people still identify themselves as Chávez supporters. But as things stood, the strategy was not enough to beat the change on offer from the opposition.

The opposition now has the power to approve (and withdraw) laws and censor the vice president and government ministers. It can approve a constitutional reform project (which would later need a public referendum to be enacted) that could change specific parts of the Constitution—such as reintroducing term limits.

It could even call for a new constitutional convention, which would allow for a complete rewrite of the country’s constitution. Many in the more radical sections of the opposition claim Venezuela’s problems are best addressed in this way, although the public is likely to be less enthusiastic.

What’s more, the new National Assembly has the power to recall the magistrates of the Supreme Court, the Electoral Council, and the Attorney General, which would shift the balance of power even further away from the government.

The opposition now has the opportunity to show political maturity by reaching for compromises with the government to bring about the economic and social change it has promised.

With its dominant position in the parliament, it can exemplify what good governance means. It could start by shunning the bullying tactics deployed by the government in the legislature over the past five years in favor of civilized political debate.

However, the opposition also wants to bring about a change in government via a presidential referendum, which might mean more aggressive tactics are in order. It needs to secure a significant number of signatures from the general public to force a vote.

Now that the opposition has a clear path to winning the presidency, significant jockeying will take place among its many leaders. Three names that stand out in particular are Henrique Capriles, who has twice run for president, Leopoldo López, who is currently in prison but may soon be released, and María Corina Machado, a stalwart of the more radical side of the alliance.

It will be up to Chuo Torrealba, the alliance’s secretary, to keep all the parties coalesced on a clear strategy instead of vying for power and influence.

All Is Not Lost

The government’s power has been significantly dented but it can at least try to use these results for the better. On a basic level, it can counter international criticisms about its increasingly authoritarian tendencies by pointing out that it has allowed this situation to unfold. Should the opposition secure major economic and social change, the government can also share the credit.

And if the opposition doesn’t deliver on its promise of change, the government could use its failure to bolster its own dwindling popularity. The opposition needs to be wary of a dangerous split occurring, with those willing to compromise with the government on one side and those who aren’t on the other—that would serve to strengthen the government.

There are incentives on both sides to cooperate and incentives to cause trouble.

So there are incentives on both sides to cooperate and incentives to cause trouble. And both have learned a lesson from this contest. For the opposition, the electoral results show that participating in the electoral contests can result in real change. For the government, it shows that constant confrontation without problem solving is not a strategy for lasting in government.

Iñaki Sagarzazu is a lecturer in comparative politics at the University of Glasgow in the U.K. This article was previously published on TheConversation.com