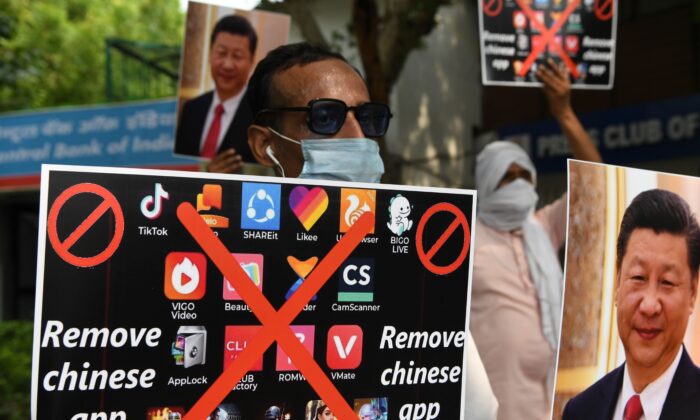 Members of the Working Journalist of India (WJI) hold placards urging citizens to remove Chinese apps and stop using Chinese products during a demonstration against the Chinese newspaper Global Times, in New Delhi, on June 30, 2020. (Prakash Singh/AFP via Getty Images)
Thinking About China

Is This Chinese App Harvesting Your Data?

India is no fan of China, and for good reason. In recent years, China has stolen thousands of acres of Indian land. China has also stolen the data of millions of its citizens. There’s little love between the two countries. In fact, there’s none at all.

On Feb. 14, the international day of love, India’s Ministry of Home Affairs recommended a ban on 54 Chinese mobile applications. One of the apps included in the recommendation was Shein, a leading online fashion retailer. With over 7 million monthly active users, Shein is now the world’s largest online-only fashion company. Rather worryingly, 40 percent of the company’s customers are based in the United States.

Why is India’s Ministry of Home Affairs looking to ban Shein, and why should the U.S. government take note?

It’s simple. This app, just like the other 53 apps, appears to have links to the Chinese Communist Party (CCP). In India, the app has raised national security concerns. In the United States, the app should also raise similar concerns.

Before getting into the ways in which the CCP uses data to further its nefarious agenda, it’s important to outline why Shein is such a shameless company. Founded in 2008 by Chris Xu, the Chinese company is renowned for its affordably priced clothing. However, it’s also known for trademark violations and human rights abuses.

In 2018, Levi Strauss & Co. sued Shein for copying a trademarked jean stitching. Last year, AirWair International Limited, the company responsible for Dr. Martens boots, accused Shein of selling copies of their designs, ingeniously called “Martins.” Not only did Shein steal the design, it used photos of authentic Dr. Marten shoes to trick potential customers. Ralph Lauren has also accused the company of selling apparel that are “substantially indistinguishable and/or confusingly similar to one or more of Ralph Lauren’s marks.”

Shein has also violated international labor standards. In Australia, rather worryingly, where the company’s corporate head office is located, Shein has failed to submit a modern slavery statement.

Moreover, scientists found that some of the Chinese retailer’s children’s clothing contain 20 times the recommended amount of lead. In the words of Miriam Diamond, an environmental chemist, “people should be shocked,” because Shein’s clothing contains “hazardous waste.”

Would you put it past this company to steal your data? Shein is owned by Nanjing Lingtian Information Technology Co., Ltd., a computer software company that very few people seem to know anything about. Concerned yet? If not, then maybe you should be.

As the Daily Mail previously reported, “the shadowy company” appears to be spying on “unsuspecting customers by using social media sites and apps,” collecting inordinate amounts of data on what its customers view as well as their preferences. After sifting through the harvested data, Shein representatives then have its factories “churn out copies at a lower cost than its competitors.” These factories, it seems, are staffed by modern day slaves, with young children being forced to work like farm animals.

Tom Tugendhat, an expert in Chinese espionage, has accused Shein of essentially being an extension of the CCP, engaging in rampant acts of “surveillance capitalism”—a pernicious system centered around the extraction and commodification of personal data.

In the abovementioned Daily Mail piece, Tugendhat claimed that Shein was in possession of a “data collection network to rival many of the world’s intelligence agencies,” which could not and would not be permitted “without the agreement of the authoritarian regime.” Many of Shein’s customers “don’t have a clue what they are giving away,” he added.

Tugendhat’s warnings should be heeded. According to Shein’s privacy policy, the company tracks various data points, including the searched items that directed users to Shein’s website. Yes. Let that settle in for a minute.

In the United States, a line, albeit a very slim one, separates Big Tech and Big Government. In China, however, Big Tech is Big Government; the two are inextricably linked. Shein may very well be a fashion company, but it’s also a Big Tech company; it leverages artificial intelligence to manipulate and track its customers.

As I have outlined elsewhere, there are plenty of reasons to believe that data collected by Big Tech companies in China is shared with the CCP. Remember, If data is the new oil, then China is the new Saudi Arabia. The CCP has already stolen the data of 80 percent of American adults, according to Bill Evanina, former director of the U.S. National Counterintelligence and Security Center. Going forward, as tensions between the two countries escalate, the CCP will continue to steal Americans’ data, and it will continue to use apps like Shein to further its immoral agenda.

If in doubt, let me point you in the direction of TikTok, another problematic Chinese app that I have discussed elsewhere. According to a new study carried out by URL Genius, TikTok is more likely than any other social media app to collect and share users’ personal data with unknown third parties. One of those unknown third parties may very well be the CCP.

India has banned TikTok; now, it looks likely to ban Shein. The United States has banned neither. Worryingly, according to Reuters, Shein has plans for an initial public offering in New York later this year. The Biden administration must prevent this from occurring.