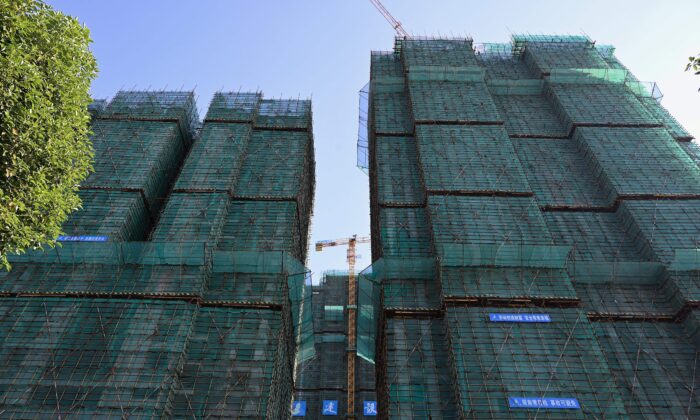 The construction site of an Evergrande housing complex is seen in Zhumadian, central Chinas Henan Province, on Sept. 14, 2021. (Jade Gao/AFP via Getty Images)
Thinking About China

Is This China’s ‘Lehman Brothers’ Moment?

On Thursday morning, in the city of Shenzhen, protesters gathered outside the headquarters of China Evergrande Group. They weren’t happy, and they wanted the executives to appreciate their palpable outrage.

China’s second-largest real estate developer is facing an existential reckoning of epic proportions, a fact that is not lost on the country’s disillusioned investors and vendors. Drowning in $300 billion worth of debt, more than 1.5 million people, we’re told, “have put deposits on new homes that have yet to be built.” A collapse would surely send ripple effects across China—and quite possibly beyond.

According to the company’s website, the “ever” in Evergrande stands for everlasting, or “never ceasing existence.” Unless the Chinese Communist Party (CCP) bails out the company, its existence looks likely to cease. However, any bailout from Beijing looks increasingly unlikely. Hu Xijin, the editor-in-chief of Global Times, a mouthpiece of the CCP, recently encouraged those at Evergrande to “use market means to save themselves.” His message was as simple as it was blunt: “Don’t bet on a government bailout. You’re not, contrary to popular belief, too big to fail.”

Whether or not Beijing steps in to save Evergrande remains to be seen. But some sort of action is desperately needed. With more than 1,300 projects in more than 280 Chinese cities, millions of proprietors and potential proprietors rely on the company. If it fails, they fail; and if they fail, the Chinese economy fails.

In addition to operating the football club, Guangzhou FC, formerly known as Guangzhou Evergrande, the company’s presence can also be felt in China’s media and leisure industries. Some commentators fear that a meltdown will affect China in the same way Lehman Brothers’ demise affected the U.S. stock market. With more than 200,000 employees, their fears appear to be warranted.

Thirteen years ago, the bankruptcy of Lehman Brothers triggered a 6.98 percent drop in the Dow Jones Industrial Average. This was the largest decline since the Sept. 11 terrorist attacks. The U.S. government’s inability to avert the crisis resulted in both a moral and financial panic. As the author Anne Sraders noted, while Lehman Brothers “was simply one of many factors contributing to the economic disaster that was 2008 and beyond,” it served as “the catalyst of the collapse of the banking and housing industries, and proved that even those that boast enormous success one year can be bankrupt the next.”

The Lehman Brothers bankruptcy was the largest in U.S. history. When the United States sneezes, the world catches a cold; and when Lehman Brothers filed for bankruptcy, the “sneeze” had a global impact. The world, as we all know, experienced the financial equivalent of COVID-19.

This brings us back to China, home to the world’s second-largest economy. Will China’s “sneeze” have global consequences in case of Evergrande’s demise? As the world’s most indebted real estate developer, there is reason to think so. The Diplomat’s Nathan Handwerker warns that “a full-blown collapse,” which looks increasingly likely, will send “ripples through the Chinese economy.” With more than three-quarters of China’s household wealth tied up in real estate development, Evergrande’s demise may very well be a symptom of a deeper economic illness. “A collapse of Evergrande could be detrimental to property values,” wrote Handwerker. This, in turn, “would deal a blow to consumer wealth and in turn lead to a slowdown in consumption and investment, in addition to other consequences.”

Prior to Evergrande’s systemic rot, the CCP had identified the country’s ballooning debt as a grave threat to its economic stability. The country’s debt levels are at an all-time high. With mass unemployment and a rapidly aging workforce, China, like Evergrande, is facing an existential reckoning of its own. The CCP, it appears, is unable to help Evergrande largely because it lacks the resources. The writing has been on the wall for quite some time; Beijing knew a crisis was coming. Now, the wolf is knocking on the door, and the “wolf warriors” are afraid to answer. But answer they must, otherwise, the country will slip into an even deeper economic malaise.

Evergrande is much more than some random real estate group; the CCP views it as a symbolic representation of China’s great rise to economic prosperity. The death of this “symbol,” though, could deal a death blow to the global economy. As the Financial Times recently noted: “Evergrande counts big international companies among its investors, including Allianz, Ashmore, and BlackRock. A default is likely to have spillover effects on global markets, where many investors have historically anticipated Chinese government support at times of distress.”

Although it’s possible that the CCP will, somehow, agree to draft a debt restructuring program, there’s reason to believe that it won’t. Just like the collapse of Lehman Brothers crippled the world economy, the collapse of Evergrande has the potential to do something similar. It’s important to note the following: The effects of Lehman’s bankruptcy, even a decade after its collapse, could still be felt—not just in the United States, but around the globe. Some will argue that the Evergrande situation is not the same. Stop comparing American apples and Chinese pears, they’ll shout. Nevertheless, China is very much sneezing; whether or not we catch this particular cold remains to be seen.