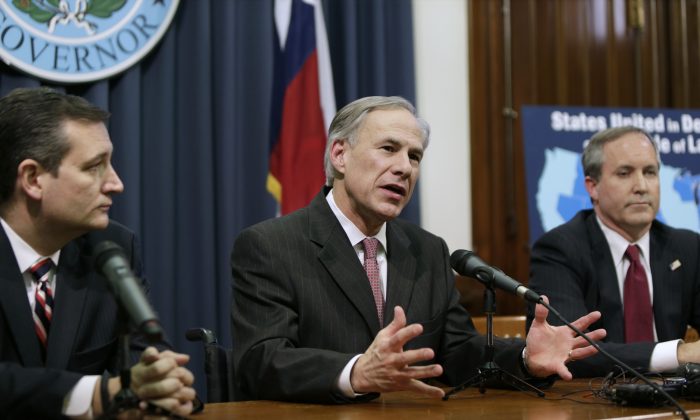 (Photo by Erich Schlegel/Getty Images)
US

Is There a Case of Bias in Texas Judge’s Immigration Action Ruling?

The program was challenged as unconstitutional by 26 states arguing the President didn’t have the power to enact it without the Congressal approval.

The program would give work permits and social security cards to 5 million illegal immigrants. The states argued that it should be stopped until a court makes a final decision, since it would be impossible to roll back the program once it started. The judge agreed.

For advocates of Obama’s program and even for the administration, the ruling by Judge Hanen was not a surprise.

A browse through Hanen’s recent judicial history seems to leave little in doubt where he stands on the issue.

“DHS [Department of Homeland Security] should cease telling the citizens of the United States that it is enforcing our border security laws because it is clearly not. Even worse, it is helping those who violate these laws,” he stated in a December 2013 ruling.

In an August 2014 ruling, he sympathized with the plight of immigration enforcement stating, “their hard work and dedication goes for naught when those in charge create policies that tie their hands.”

So how is it that a judge with a clear track record of criticizing the current administration’s immigration policy preside over a case that has major impact on that same policy?

There are two ways to get a federal judge off a case for bias. One is accusing the judge of misconduct. But that is a long shot, according to Russell Wheeler, federal courts expert with the Brookings Institution and American University professor.

“I don’t think a complaint would get very far,” he commented, unless a party can “show a consistent pattern of bias from a whole series of rulings.”

The other way would require Obama’s administration to move to disqualify the judge for personal bias or prejudice. In this case it would be enough if the judge’s “impartiality might reasonably be questioned,” the law states.

But if the judge refuses to leave the case, the petitioner has to appeal to a higher court. Wheeler acknowledged Hanen’s comments on DHS could be interpreted as biased, but doubted if an appellate court would find the statements “sufficient to remove him from the case.”

There are exceptions to the rule though.

California Immigration Judge Afsaneh Ashley Tabaddor was pulled off all her cases involving Iranians by the Department of Justice in 2012 after she attended a roundtable with Iranian-American community leaders hosted by the White House Office of Public Engagement.

Tabaddor, an Iranian-American, considers herself an Iranian community leader and the roundtable involved discussions on federal initiatives concerning Iranian-Americans. She’s now suing the Justice Department for violating her First Amendment rights, saying her race was part of the reason for the department’s decision.

In another example, Federal Judge Shira Scheindlin was removed from a case dealing with the controversial “Stop and Frisk” policing practice in New York in 2013. The reason the appellant court gave was the she advised the plaintiffs in 2007 on how to file the suit, and then in 2013, she talked to the press about the case, while it was still pending.

While initially the appellant court accused her of violating judges’ code of conduct, it later released a milder opinion.

“We emphasize at the outset that we make no findings of misconduct, actual bias, or actual partiality on the part of Judge Scheindlin,” the three-judge panel stated. “[W]e need only find that the facts might reasonably cause an objective observer to question the judge’s impartiality.”

Based on these cases, a reasonable observer could doubt Judge Hanen’s objectivity based on his prior statements.

The difference lies in what a judge does publicly or directly relating to the case at hand, according to Evan Lee, a law professor at the College of California.

Even though immigration judges are governed by different rules than federal judges, the argument for putting Tabaddor off Iranians’ cases was the same. Her public advocacy for the Iranian community created “appearance problems,” according to the Justice Department. “In no way” was the department suggesting that she had “an actual bias.”

In judge Scheindlin’s case, she talked to the press about the case while it was still pending. “That’s a big no-no,” Lee noted.

Hanen, on the other hand, is not known for public statements on immigration and “the appearance of bias comes from statements not about the pending case,” Lee explained via email.

Indeed, Hanen made the comments after facing four cases in a matter of weeks when a mother, illegally in United States, paid human smugglers to bring her child from Central America. In each case, when apprehended, the children get reunited with the mothers, and the mothers are not charged with any crime and not immediately deported. Hanen took issue with this DHS practice.

Hanen doesn’t seem to be all that outspoken about Obama’s program specifically.

“The distinction is important because otherwise a lot of judges would have to recuse themselves from cases based on their track record in and out of court,” Lee stated, giving multiple examples of Supreme Court Judges vocal on a number of issues.

“Justice Scalia has made tons of political statements, but he never recuses himself from anything. Justice Ginsburg has made lots of statements about sex discrimination–there is no question where her loyalties are. But she doesn’t recuse herself from sex discrimination cases,” Lee stated.

Thurgood Marshall, former Supreme Court Justice famous for winning desegregation of public schools as a lawyer “never recused himself from race cases unless he had worked on them as a lawyer,” according to Lee.

Judges go about the issue by trying to be general in their comments, said Duke University Professor Ernest Young, expert on constitutional law and federal courts.

He noted “judges vary in what they think is appropriate,” but they’re hardly ever removed from a case. Part of the reason is that removing a judge from a case can in and of itself create an appearance of bias.

“I think usually we just try not to open that can of worms,” Young said.

Correction: The article was updated to reflect that Afsaneh Ashley Tabaddor is an immigration judge.