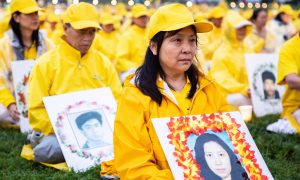 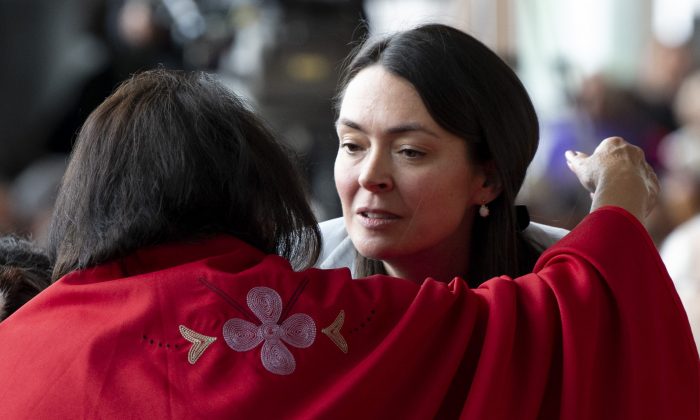 A woman embraces Commissioner Qajaq Robinson during ceremonies marking the release of the final report of the National Inquiry into Missing and Murdered Indigenous Women and Girls (MMIWG) in Gatineau, Que., on June 3, 2019. (THE CANADIAN PRESS/Adrian Wyld)
Viewpoints

Is There a Canadian Genocide?

Genocide and Canada don’t go together in the minds of most. Indeed, if Canada were a repressive country, one would be mystified to understand why hundreds of thousands come to its shores as immigrants and refugees every year. Just the same, the long-awaited final report of the National Inquiry into Missing and Murdered Indigenous Women and Girls (MMIWG) was issued June 3, saying Canada is genocidal from its origins until the present day.

“Canada is a settler colonial country,” the report begins. “European nations, followed by the new government of ‘Canada,’ imposed its own laws, institutions, and cultures on Indigenous Peoples while occupying their lands. Racist colonial attitudes justified Canada’s policies of assimilation, which sought to eliminate First Nations, Inuit, and Métis Peoples as distinct peoples and communities.

“Colonial violence, as well as racism, sexism, homophobia, and transphobia against Indigenous women, girls, and 2SLGBTQQIA [two-spirit, lesbian, gay, bisexual, transgender, queer, questioning, intersex, and asexual] people, has become embedded in everyday life—whether this is through interpersonal forms of violence, through institutions like the health-care system and the justice system, or in the laws, policies, and structures of Canadian society.

“The result has been that many Indigenous people have grown up normalized to violence, while Canadian society shows an appalling apathy to addressing the issue. The National Inquiry finds that this amounts to genocide.”

In most people’s mind, the term “genocide” is often associated with the systematic destruction of an entire group of people by another group. It brings to mind atrocities against an entire race such as the Holocaust, where 6 million Jews were exterminated at the hands of Hitler’s Nazi Germany, or the Holodomor, where 7– 10 million Ukrainians died of a man-made famine under Stalin’s Soviet regime.

Deaths on this scale never occurred on Canadian lands in colonial times, nor after Confederation in 1867. An RCMP report in 2014 said that the number of cases of missing and murdered Indigenous women totalled roughly 1,200 between 1980 and 2014, while Indigenous women’s groups reported the number to be over 4,000.

The MMIWG report, however, says that genocide encompasses something larger than merely the number of deaths. It cites pre-World War II Polish-Jewish legal scholar Raphael Lemkin, who wrote: “Generally speaking, genocide does not necessarily mean the immediate destruction of a nation, except when accomplished by mass killings of all members of a nation. It is intended rather to signify a coordinated plan of different actions aiming at the destruction of essential foundations of the life of national groups, with the aim of annihilating the groups themselves.”

Furthermore, he wrote that genocide would aim for the “disintegration of the political and social institutions, of culture, language, national feelings, religion, and the economic existence of national groups, and the destruction of the personal security, liberty, health, dignity, and even the lives of the individuals belonging to such groups.”

The irony is rich. If genocide is the systematic disintegration of the nationalism and institutions of a country, then this report, with its premise of delegitimizing and revoking the Canadian state with its institutions and culture, should be considered genocidal by its own definition. The report, titled “Reclaiming Power and Place,” issued “231 individual Calls for Justice directed at governments, institutions, social service providers, industries, and all Canadians.” These were not suggestions, but “legal imperatives.”

A little history of cultural Marxism shows how a document like this is a textbook case of societal subversion.

One hundred years ago, European Marxists were surprised that the Bolshevik revolution in Russia didn’t spread to Europe. After some consideration, they decided that the oppressed worker class did not rise up because Western culture and Christianity had blinded people to the real problems. Only if culture and faith were destroyed could their goals succeed.

Italian Marxist activist Antonio Gramsci proposed a “long march through the institutions” until the culture is destroyed from within. The movement set up the Institute for Social Research in Germany, later dubbed the Frankfurt School. Cultural Marxism was born.

As an ideology, cultural Marxism said that not only was the worker class oppressed, but so was everyone else (except white men). During the Nazi era, the school relocated to New York with the help of Columbia University. It returned to Frankfurt after World War II, but its early disciple Herbert Marcuse stayed behind in America. He said the revolution against America would be led by blacks, homosexuals, feminists, and college students. This goal would be advanced by relentless criticism of all Western institutions until they were torn down.

Replace blacks with Indigenous, and the report can be seen as continuing the same agenda of promoting class struggles as intended by Marxism. Who are the victims? Women. Why does a report on women include a uniquely Canadian alphabet soup of gender identities and sexual orientations? To include the homosexual “repressed revolutionaries” identified by Marcuse. And college students? You can find them in the ethos of the report. The oppressed Aboriginal is the political subtext for Indigenous studies in university, just as feminism is the subtext for women’s studies. This document is the result, firing bitterly in all directions at everything Canada is and was.

Meanwhile, another Canadian genocide is happening not only against the Indigenous Peoples but every other ethnicity in Canada—with numbers in the millions. It is abortion.

Abortion was legalized in 1969 by Prime Minister Pierre Trudeau, but with restrictions. The elder Trudeau crafted the Constitution Act in 1982, and this was used to strike down abortion laws in 1988. Governments failed to pass subsequent legislation in the next few years, after which it became politically forbidden to address. This means abortions are legal at all gestational changes. The number of surgical abortions exceeded 100,000 annually before the abortion pill became available. In 2017, they numbered 94,030, versus 376,291 live births, according to the Canadian Institute for Health Information and Statistics Canada respectively. The all-time count in Canada is roughly four million.

While some American states are banning abortion for any fetus with a heartbeat, the Canadian province of Quebec pledged to make late-term abortions more available. In Ottawa, one Quebec MP asked for unanimous consent “that the House of Commons reiterate that a woman’s body belongs to her and her alone, and recognize her right to choose an abortion regardless of the reason.” Members of all parties except the Conservatives literally rose to applaud.

And Canada is not content to leave its abortions at home. On June 4, Prime Minister Justin Trudeau announced Canada would increase its foreign spending on women’s health to $1.4 billion annually starting in 2023, up from $1.1 billion. Currently, Canada gives $400 million to sexual and “reproductive health” worldwide, but that will increase to $700 million in 2023.

As Canadians go about their days, their tax dollars bring one in five pregnancies to a bloody end. Regarding this, the inquiry report might have said it best: “Canadian society shows an appalling apathy to addressing the issue … that … amounts to genocide.”