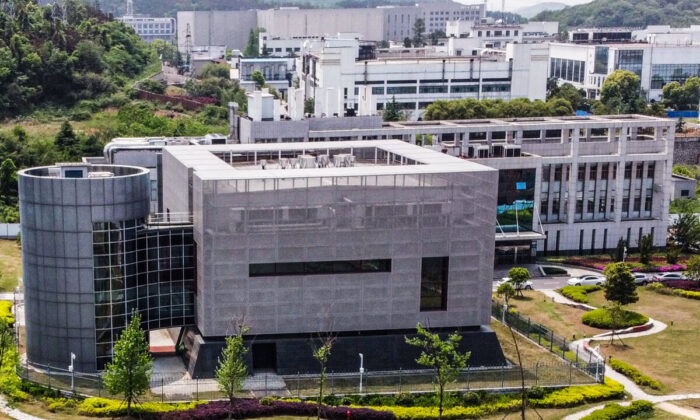 The P4 laboratory at the Wuhan Institute of Virology in Wuhan, China, on April 17, 2020. (Hector Retamal/AFP via Getty Images)
Thinking About China

Is the Wuhan Coverup the Biggest Lie in US History?

Despite months of denial, documents recently obtained by The Intercept clearly show that both the Wuhan Institute of Virology and the neighboring Wuhan University Center for Animal Experiment, “along with their collaborator, the U.S.-based nonprofit EcoHealth Alliance,” knowingly engaged in “gain-of-function research.” In other words, viruses were intentionally made “more pathogenic or transmissible”—all in the name of science, of course.

As The Intercept noted, this type of research took place “despite stipulations from a U.S. funding agency that the money not be used for that purpose.”

In an interview with Newsweek, American molecular biologist Richard Ebright argued that the documents clearly show “that NIH [National Institutes of Health] grants were used to fund controversial gain-of-function (GOF) research at the Wuhan Institute of Virology in China.” However, Dr. Anthony Fauci, a man who has been lauded by many left-leaning outlets, has vehemently denied this claim.

If Ebright is correct—and there’s plenty of reasons to think so—then Fauci lied before Congress, a felony that comes with a prison sentence of up to five years.

More worryingly, Fauci’s lie (or lies) is symptomatic of a much deeper malaise gripping the country. For the best part of two years, the American people have been gaslit by the mainstream media. Questions of the virus emerging from a lab in China’s Wuhan city have been called racist and misinformed.

In reality, ever since former President Donald Trump discussed the likelihood of the virus originating in China, left-leaning publications have gone to great lengths to say the very opposite. A deadly virus has been politicized. Because of this, no one benefited—except, of course, members of the Chinese Communist Party (CCP).

Although we can debate the exact numbers of cases and deaths, millions of people have died from COVID-19, including hundreds of thousands of Americans. Still, China is no closer to admitting fault. In fact, it’s busy pushing lies about the virus originating in Maine—yes, Maine, the easternmost state in the United States.

According to a recent survey by academics at Chapman University in California, the thing Americans fear most are corrupt government officials. It’s easy to see why.

Eighteen years ago, the United States invaded Iraq. Why? Because, according to then President George W. Bush, “Intelligence gathered by this and other governments leaves no doubt that the Iraq regime continues to possess and conceal some of the most lethal weapons ever devised. This regime has already used weapons of mass destruction against Iraq’s neighbors and against Iraq’s people.”

This lie was an extremely costly one. As the journalist Matt Taibi noted, it “cost over a hundred-thousand lives just in Iraq and drained north of $2 trillion from the budget.” Unsurprisingly, the “most lethal weapons ever devised” or weapons of mass destruction (WMD), were not discovered, largely because they didn’t exist. Although a number of media outlets initially supported the president, and far too many were reluctant to question the invasion, by October 2004, roughly 18 months after U.S. troops arrived in Iraq, the WMD-narrative was being questioned by commentators on both sides of the political aisle.

Since the ill-advised invasion, the American people have also been sold other lies, including Russiagate, a conspiracy involving Russian “meddling” in the 2016 U.S. election. The scandal, which appears to have been created by the Clinton campaign, was devoid of any evidence whatsoever. Yet, unsurprisingly, this didn’t stop the likes of CNN and MSNBC from devoting hundreds of hours of airtime to the promotion of a fictional narrative. However, when Robert Mueller’s report arrived in the spring of 2019, it was clear, even to the blindest and most biased of individuals, that the allegations of collusion being leveled against Donald Trump were detached from actual reality.

Which brings us back to the dishonesty surrounding COVID-19, which was first detected in Wuhan almost two years ago. As the CCP rejects further inquiries into the origin of the virus, and prominent American voices continue to refuse the reality of the situation, we are no closer to holding the Chinese regime responsible. The lie continues to be given life by dishonest actors, some of whom occupy positions of significant power within the branches of government, and by others who occupy positions of significant power within branches of the mainstream media.

This lie, like the WMD lie, has been a costly one. Is it the biggest lie in U.S. history? I believe so. Sadly, unlike Iraq and Russiagate, we may never get the closure that we deserve.