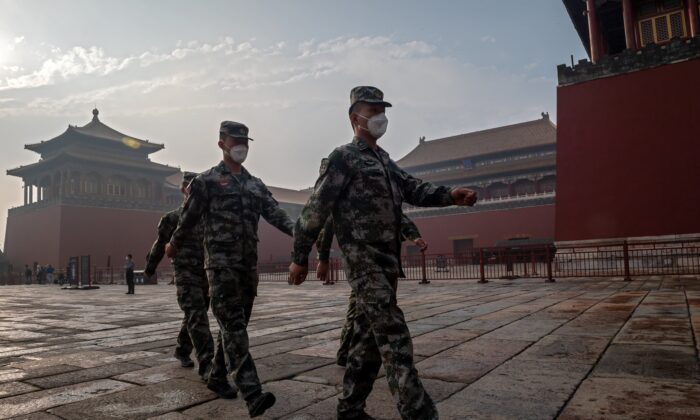 China’s People's Liberation Army soldiers march next to the entrance to the Forbidden City during the opening ceremony of the Chinese People's Political Consultative Conference in Beijing on May 21, 2020. A report analyzed the dependency of five democratic countries on China and recommended decoupling from the increasingly belligerent Asian nation. (Nicolas Asfouri/AFP via Getty Images)
Thinking About China

Is the West Decoupling From China?

For the West, China has gone from source to target

Even before former U.S. President Donald Trump began his 2019 “trade war” with China, policymakers had begun asking questions about decoupling the two economies.

Those discussions were a reaction to the co-dependent relationship that had grown up over time. Chinese development depended heavily on an ever-increasing flow of exports to the West, while Western economies had grown perhaps excessively reliant on inexpensive Chinese products. The “trade war” raised the volume of this discussion, as did 2020’s pandemic.

Post pandemic the questions remain, but matters have become more complicated. Considerable evidence suggests that the old arrangement is fading, that a decoupling is in fact taking place. But at the same time, other evidence suggests a new Western interest in China is replacing it.

The change has produced an interesting mix of media stories. One report, for example, quoted the managing partner for Asia of a major global law firm. He described how his corporate clients in Europe and the United States are “spooked” about the “flux” in established global supply chains, making boards of directors very interested in decoupling from China.

In contrast, a different story described the enthusiasm of a prominent investment banker about the growth and development opportunities in China, and how they are attracting Western investment flows. This story noted how 27 prominent European companies are pouring additional monies into their Chinese joint ventures.

These are just two illustrations of the mixed nature of the evidence. They are nonetheless indicative.

The first of these news stories captures fading old arrangements. These go back to the start of China’s trade with the West. Chinese wages were low, especially compared to the United States, Japan, and Europe. And China had a large, disciplined, reasonably well-educated workforce. From that base, the country sold itself to the world—and very effectively, too—as an attractive place to source. Money from the United States and the rest of the developed world poured into China to build factories to make goods cheaply for export back to each investors’ home country as well as other markets. But over the years as China developed, wages rose. Chinese labor looked less cheap, making these original arrangements less attractive to Western businesses. The 2019 “trade war” and then the 2020 pandemic further diminished the attractions of these arrangements. Western business began to look elsewhere for its sourcing.

The second of these news stories is about another, newer source of Western interest in China. As the old export model facilitated Chinese development, an ever larger and more prosperous consumer class emerged. So even as Western business reconsidered the old arrangements, it saw new opportunities for investment in China, not to produce for export back to their home markets, but rather to produce their brands in China and so secure a favorable position to sell into the now rich domestic Chinese market.

The shift began with changing cost calculations. Twenty years ago, when China first joined the World Trade Organization (WTO), wages there looked very low compared with Europe, the United States, and Japan, and a good part of the emerging world as well. But the huge investments into China that cheap labor induced, increased demands for workers and accordingly raised Chinese wages. Chinese costs began to catch up with the rest of the world and did so quickly. Between 2015 and 2020, for example, the average hourly wage in China, according to Beijing’s Bureau of Statistics, increased 9.0 percent a year, a jump of over 53 percent in just those five years. In the United States, by comparison, hourly wages during this time increased at about 5.0 percent a year. The cost gap was closing fast, and Western business began to look elsewhere for lower sourcing costs—to Vietnam, Indonesia, Malaysia, and elsewhere in Asia.

The 2019 “trade war” accelerated the pace of change. Tariffs placed on Chinese goods increased the cost of bringing goods back to the U.S. domestic market, pushing Americans to increase the pace of their shift of production away from China. Meanwhile, Chinese producers, to avoid the American tariffs, shifted their production to Vietnam, Indonesia, and elsewhere.

Then during the pandemic, China limited the export of certain critical products. Beijing’s decision was certainly understandable in the circumstance, but it nonetheless raised questions about reliability among the Western firms looking to source overseas.

The mix of investments into China further confirms the new Western emphasis. Whereas in the past, the bulk of the direct investments focused on manufacturing, largely for export to the domestic economies of the investors, more recent investment flows have emphasized services and retail inside China. Figures from the U.S. Commerce Department tell the story well. In the last couple of years, only 30 percent of the direct investment flow has gone to manufacturing. Fully 60 percent of the flow has gone to services and especially retail. These monies clearly aim to take advantage of China’s increasingly rich domestic market, a very different picture from the not so distant past.

So it seems that both sides of the decoupling story are on to something. There is clear decoupling from China as a source of products. Supply chains, in the words of the lawyer quoted earlier, are indeed in “flux” and shifting away from China to elsewhere in Asia. At the same time, the attractions of the Chinese consumer market are creating a new form of coupling about which the investment banker quoted earlier enthused.