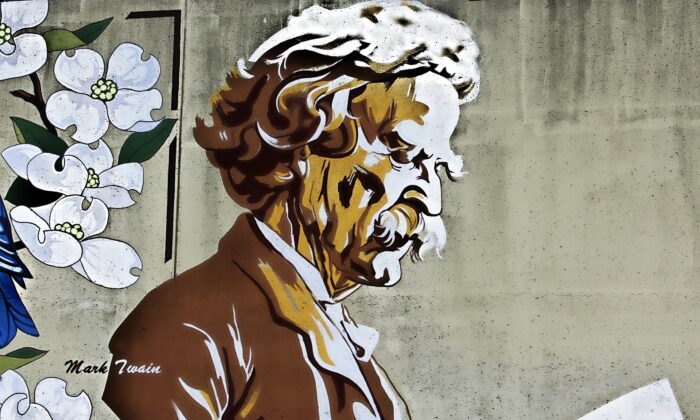 Is the Rift Between the Public and the C-Suites Permanent?

HANNIBAL, Mo.—During a visit to Hannibal, Missouri, in 1882, Mark Twain wrote to his wife Olivia of the rush of sentiments he experienced returning to the town of his childhood.

“I have spent three delightful days in Hannibal, loitering around all day long, examining the old localities and talking with the grey-heads who were boys and girls with me 30 or 40 years ago,” he said. “It has been a moving time. I spent my nights with John and Helen Garth, three miles from town, in their spacious and beautiful house. They were children with me, and afterwards schoolmates.”

Garth was Twain’s childhood friend, and Hannibal was their playground.

It was here the boys roamed the hills, rivers, and caves that surrounded this Mississippi River town. Twain, known as Samuel Clemens in his youth, would leave here as a teenager and go on to spin his youthful adventures into “The Adventures of Tom Sawyer,” “Adventures of Huckleberry Finn,” and dozens of other books.

Walking through the parlors, libraries, and kitchen of the Garth home, a stunning Second Empire-Italianate mansion that is now a delightful bed-and-breakfast, it’s easy to imagine Twain holding court here with his childhood friends who went on to have their own significance in the fabric of their country.

Laura Hawkins Frazer, his childhood sweetheart and the model for his beloved character Becky Thatcher, was there. Her role in the community was as the matron of the Home for the Friendless, a charity organization for widows, mothers with dependent children, and adolescent girls: all vulnerable people who depended on Fraser to keep the doors open, sparing them from the horrors of homelessness and despair.

Frazer, after not seeing Twain for a period of time during which he ascended to what was then the equivalent of rock-star status, had worried if he would be spoiled by the fame. Then, though, she rethought the sentiment, saying, “I suppose if there was any danger of that, it would have happened long ago.”

Garth and his wife Helen, also a childhood friend, had briefly moved to New York City, where he prospered in the banking, brokerage, and manufacturing industries; they returned to their roots and built this opulent home.

They also returned to their roots and gave back to the community that launched their pursuit of the American dream. They provided jobs, donated to worthy causes such as the Home for the Friendless, and attended church shoulder to shoulder with the people in the community. And when Garth died, his wife donated $25,000 for a stand-alone library to be built in the center of town.

Several years before that, Twain’s brother Orion Clemens, along with Robert Elliott, who moved to Hannibal as a young man from England and also became a successful businessman, were instrumental in the formation of the Hannibal Library Association. Elliott took on the cause of a free library, which was located on the second floor of the Park Theatre.

That facility became the first free public library in the state of Missouri; the Garth Library was its next incarnation, with thousands more books and its own building to facilitate that expansion.

Alas, those sorts of hometown civic-minded actions from the rich and successful may not still be as common as they were in Twain’s time.

Steve McMahon, a Washington-based public affairs professional and co-founder of Purple Strategies, said that those who run the corporations that employ millions and dominate the culture have shed their connection with both their employees and their customers.

“Once upon a time, owners like Milton Hershey or the Kellogg family were invested in the communities where they, along with their employees and customers, lived, worked, and worshipped,” he said.

Today, McMahon said that connective tissue is broken because owners don’t know their customers, adding that they also live far away from most people who work for them and who buy their products.

In response, their attitudes toward both their workers and their customers have amounted to a smear of the latter’s values and way of life. McMahon said this has contributed to a political alignment to which, until recently, those same workers and consumers may never have imagined themselves drawn.

In short, if you work at a warehouse for Amazon either packing, unpacking, gathering, loading, or delivering, then outside of showing up for work every day, you have nothing in common with Jeff Bezos, the man who founded the company, or Andy Jassy, the man who currently runs it.

Nor do most people using the service have many commonalities with either. If Bezos or Jassy once knew anyone who lives outside of America’s super ZIP codes of wealth and power, they have long shed any affinity with that familiarity.

In 2018, Brad Todd and I co-authored “The Great Revolt: Inside the Populist Coalition Reshaping American Politics.” In that book, we outlined the coalition of voters that had in large part formed in reaction to the voters’ disconnect with the decision-makers in the lefty, globalist C-suites running corporate America.

It was an alignment that found unlikely kinship: a conservative populist coalition that had establishment Republican elected officials such as Sen. Pat Toomey finding themselves, sometimes kicking and screaming, voting alongside blue-collar Democrats, infrequent non-ideological voters, and suburban parents.

Those archetypes had formed long before former President Donald Trump rode that golden escalator in 2015, and they formed largely in response to the relentless shedding of the value, worth, and thought that comes from the parts of American life not lived in the centers of wealth and power.

It’s highly unlikely that Garth was a perfect man, but he was a man who, once he called Hannibal his home, remained rooted to its values, even when he was out conquering the world. There is scant evidence that he used his wealth and power to demean those who worked for him and scant evidence he worked in harmony with other power brokers in his time to do the same.

That can’t be said about today’s cultural curators in our C-suites of legacy media, corporations, education, bureaucracies, Hollywood, and Silicon Valley, who have decided that those who live outside of their super ZIP codes deserve nothing less than a daily onslaught of vigorous attacks on their values and way of life.

It is so common and so relentless that it is no longer a mere tear but a full split, and it appears that those with the most power seem either oblivious or unwilling to mend it.