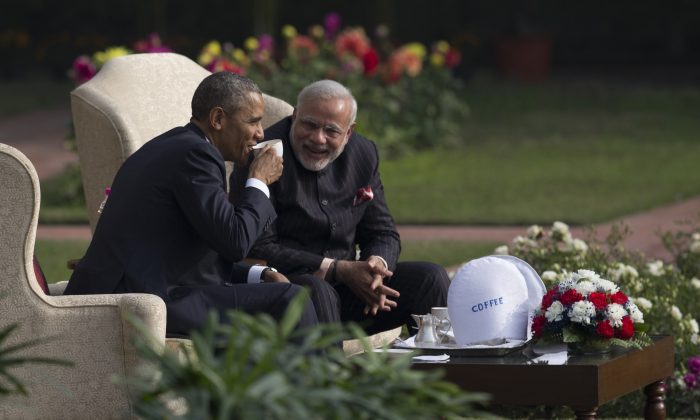 It certainly looked like genuine affection when Indian Prime Minister Narendra Modi pulled President Barack Obama into a bear hug as he stepped off Air Force One last year. An intimacy seemed to envelope the two as they sat in the garden of an old royal palace, smiling and chatting.

There are the gushing comments: Modi “transcends the ancient and the modern,” Obama wrote in Time magazine. “Barack and I have formed a bond, a friendship,” Modi said.

It’s a friendship that will almost certainly be on display when Modi arrives Tuesday at the White House for his seventh meeting with the U.S. president.

It’s a refrain heard repeatedly among India’s political analysts, who see calculation instead of genuine affection, with an Indian leader carefully shaping the country’s political narrative by putting himself at the center of any diplomatic achievement.

Foreign leaders have willingly played along, appearing with the prime minister in choreographed private moments, whether it’s Modi taking a selfie in Shanghai with Chinese Premier Le Keqiang or pouring tea for Obama in New Delhi.

“The Americans have realized that one of the ways that you can get something out of Mr. Modi is to emphasize his personal charm,” said Sharma. “It’s in the interests of pretty much every country he visits to stress the warmth of the personal relationship between their leader and the Indian prime minister.”

The US Needs to Work Fast on Passing the TPP

There is always theater in politics, of course, and all politicians understand the need to sometimes say one thing while believing something else. But Modi has carefully woven his personality into India’s international standing, creating what former Indian national security adviser M.K. Narayanan has called a “personalized diplomacy.”

In many ways it’s about respect.

India has long felt slighted by the global powers, seeing itself as a powerful, highly educated country that is all-too-often dismissed for its poverty, dirty streets and the lingering power of its caste system.

Friendships with world leaders, particularly one as powerful as Obama, prove to India—and its voters—that Modi can change that.

“He comes back from his visits (abroad) to say: ‘I’ve been able to secure so much respect for India,'” said Nilanjan Mukhopadhyay, a Modi biographer. When Modi publicly refers to Obama by his first name “he’s claiming the position that he’s equal to the president of the United States.”

“It’s kind of a reverse colonialism that India suffers from,” said Mukhopadhyay. “We don’t feel we’re important until we’ve gotten some kind of endorsement, especially from Western countries.”

The respect is particularly sweet in Washington, where Modi wasn’t even welcome until becoming prime minister in a landslide election victory in 2014.

Modi, who rose to prominence as a leader of the Hindu nationalist Bharatiya Janata Party, was denied a visa to visit the U.S. in 2005, three years after religious riots killed more than 1,000 Muslims in the western state of Gujarat, where he was then the top official.

American officials largely avoided contact with him until the 2014 elections over suspicions that he was involved in the rioting or did not do enough to stop them.

Modi arrived in Washington on Monday during a five-nation tour that also takes him to Switzerland, Afghanistan, Mexico and Qatar. He meets with Obama on Tuesday, and addresses a joint meeting of Congress on Wednesday. He’ll also meet Congressional leaders and top business officials.

Obama has much to gain from good relations with Modi, from increased U.S.-India trade to closer ties to another country worried about the rise of China.

In many ways, the Washington-New Delhi relationship has not lived up to its potential since a landmark 2008 nuclear energy agreement, signed during the administration of President George W. Bush. That agreement had seemed to signal the end of three decades of Cold War suspicions, when the U.S. was more focused on ties with India’s archrival, Pakistan, and many in Washington believed India was far too friendly with the Soviet Union.

But things haven’t always gone as planned: There was the 2013 arrest in New York of an Indian diplomat, which infuriated India, and displeasure in Washington over a 2010 Indian liability law on accidents at nuclear power plants. U.S. lawmakers say it’s still too hard for Americans to invest in India, even with some easing of restrictions under Modi.

Still, U.S.-India trade has grown dramatically since the 2008 accord, expanding from $60 billion in 2009 to $107 billion in 2015. The U.S. has also become a major supplier of military hardware to India. A defense logistics agreement is likely to be finalized during Modi’s Washington visit. A solution is also expected to be reached on the nuclear liability law.

But the question remains: Are they really friends?

There’s no way to know. Both men regularly talk about their friendship, and officials from both countries highlight the relationship.

Obama’s quotes, though, seem carefully gauged to avoid anything too personal: “We have developed a friendship and close working relationship,” he told Press Trust of India in an interview earlier this year.

Modi, though, can be downright effusive, referring to their “personal chemistry” and hinting at a real intimacy.

Asked last year what he and Obama had discussed during a private meeting, Modi responded coyly, quoting from a famous Bollywood musical: “Let that remain behind the veil.”