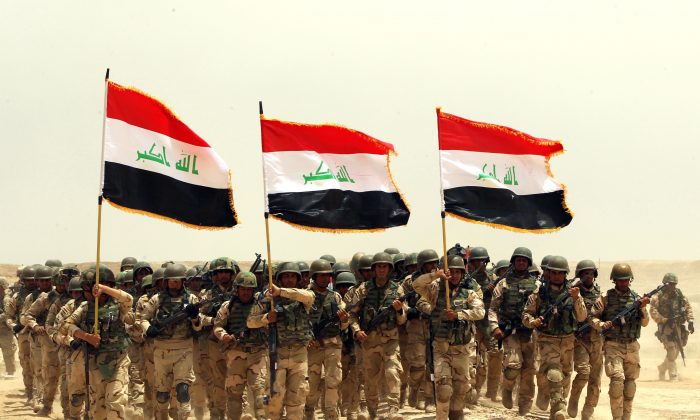 Thousands of Iraqi soldiers take part in a training exercise led by the Spanish Army and under the guidance of the U.S. military in the Basmaya Camp in Baghdad, Iraq, on May 27, 2015. (Ali al-Saadi/AFP/Getty Images)
Middle East

Building an army in a short space of time is a very difficult task. To be sure, there are some impressive examples. Cromwell’s republican New Model Army was put together while the English Civil War was already underway; Washington’s army of U.S. Independence quickly wore down and beat the British in the 18th century; Napoleon’s revolutionary army was born from the French Revolution and swept all Europe before it; the Red Army of the Soviet Union was forged from the chaos of its defeat in World War I.

But the list of failures is just as spectacular. The South Vietnamese Army boasted billions of dollars, up-to-date equipment and state-of-the-art training, but couldn’t control even South Vietnam itself. It ultimately surprised observers only by holding on as long as it did after the Americans left.

The Soviet Union similarly built up the communist army in Afghanistan but always distrusted it as a fighting force; it ultimately suffered mass desertions.

Despite being nourished, trained, and supplied by the United States, the Iraqi army seems to be perpetually in trouble.

And the latest ignominious addition to the list seems to be the Iraqi army. Despite being nourished, trained, and supplied by the United States, it seems to be perpetually in trouble, whether failing to fend off terrorist groups or all but collapsing in the face of a stunning advance by ISIS.

The army wasn’t always in such bad shape. The United States spent $25 billion equipping and training its forces; in 2008 the BBC called it another New Model Army. It initially performed well, taking Basra in the south from the Mahdi army and other Shiite militias.

But starting in 2014, it retreated. ISIS first approached and overran Mosul (the second largest city in Iraq), then Tikrit; this year, the army lost Ramadi. Tikrit was recaptured, but by all accounts is now a ghost town as the inhabitants will not return—a clear vote of no confidence in the Iraqi armed forces.

Why did the Iraqi army collapse? The standard account puts it down to a combination of poor leadership, morale, and equipment, combined with a steep decline in the quality of training once the United States left.

Top US Military Officer Arrives for Talks in Iraq

The Americans are probably right when they say that things declined after they left, but that means they didn’t leave an army able to stand on its own. In 2007, amid concern that training was not working and the Iraqi Army could not stand on its own, one of the U.S. Army’s own trainers said something all too prescient, “We can’t leave here for another five years, minimum.”

This highlights an issue more than incompetence, corruption, or declining morale because these things are often a symptom not just a cause of instability. Here we can again compare the Iraqi army with that of the then South Vietnam.

The South Vietnamese army was excellent in certain divisions and at certain times, but that was never enough to stand in the way of the North’s forces. Like their Viet Cong counterparts in the south, the North Vietnamese troops felt they were fighting for a cause. That kept them going through massive bombing and artillery fire, search-and-destroy missions that ravaged the countryside, assassination campaigns in the Phoenix Program of the late 1960s, and regular torture on capture.

Some still hold to the line that the South Vietnamese army maybe wasn’t that bad, but it would never have survived this. In the end, its troops knew what all the conflict’s more critical Western observers did—that South Vietnam was not a functioning state, and certainly not a functioning nation. Without the United States beside them they did not continue fighting.

The reason the Iraqi army collapsed in 2014 and under Saddam in 2003 are the same: its troops do not want to fight for a corrupt regime ruling a phony state.

The same goes for the Iraqi army of today. Yes, we can talk about corruption and “ghost soldiers” and broken equipment and pay levels, but the real reason the Iraqi army collapsed in 2014 is the same reason it collapsed under Saddam collapsed in 2003: its troops did not want to fight for a corrupt regime which ruled a phony state.

The real fighting by what was left of the “Iraqi army” came afterward, when its soldiers split into sectarian factions and fought as Sunni or Shiites and/or from certain regional areas to which they felt loyalty. The army’s current iteration doesn’t have an esprit de corps or loyalty to the state. It is, as Paul Rogers points out, a Phantom Army in the wider sense of the term.

Jon Moran is a reader in security at the University of Leicester, U.K. This article was previously published on TheConversation.com