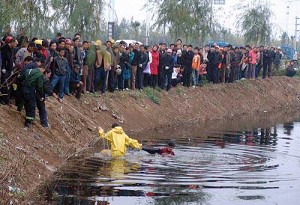 A woman saved by firefighters whilst watchers chatted and laughed. (Photo from Internet)
China

Is the Human Heart Numbed or Warped?

The Chinese nation is a great and sympathetic nation. Nourished by traditional Chinese culture, many Chinese people have a caring, sympathetic nature and show great kindness towards each other.

Nobody knows, however, when the Chinese people started becoming more inhumanely indifferent towards others. This indifference ranges from just sweeping away the snow in front of one's own house to not lifting a finger to save someone in mortal danger.

Sichuan Elder Beaten to Death, No One Intervenes

On the afternoon of Feb, 26, 2007, a tragedy occurred in the Qinglong Farm Market in Sichuan Province. A 50-year-old man's wallet was stolen as he was selecting farm products. After realizing the theft, he ordered the thief to return his wallet. But in return the thief made many abusive remarks to him, even heavily kicked him to the ground and then casually walked away. When a doctor rushed to help the elder, he was already dead.

The whole incident lasted several minutes; however, people just stood by and watched. No one came forward to help the victim. Businessmen in the market said that since the market was built two years ago, thieves have run rampant and no one dares to stop them.

People Were Making Fun of Her, Elderly Woman Strips in Public

On Jan. 23, 2007, an elderly woman's motor tricycle was detained by police at Zhengzhou Train Station in Henan Province. The woman claimed she was handicapped. When she proceeded to remove her clothes to prove her handicapped condition, onlookers jeered at her. She was enraged at their insult and, while crying, took off her clothing one piece at a time in public. Local police didn't even try to stop the absurd scene.

The elderly woman accused them in tears, “I am 60 years old and have high blood pressure. Those conscienceless people booed and hooted. How can I even raise my head?”

On Jan. 2, 2007, a young girl, surnamed Wu, stood on the brink of suicide on a sixth floor windowsill of a hotel on Sansheng Street, Chengdu City of Sichuan Province. Onlookers standing on the street below egged her to jump.

During this time, it was bustling with noise and excitement under the building. Some watchers jeered, “Jump! Jump!” Some people took out cameras to take pictures and some people made cell phone calls to their friends telling them to the scene. A young man even sat on a windowsill playing guitar and singing while watching.

Local reporters took the chance to interview a dozen of the watchers. They all said that they were neighborhood businessmen and residents who learned about someone intending to jump out of the building and thus came to watch. Some of them had already stood there and watched for three hours.

“I'm from the farm market on the opposite street. Upon hearing the story, I came over with curiosity to see whether she would jump or not,” a woman said.

Fortunately the girl was persuaded not to commit suicide and climbed back into the room. Some people made catcalls as if unsatisfied.

However, not all the people who plan to jump from a building are as fortunate as the previous girl. On Jan. 9, a young man committed suicide by jumping from the ninth floor of Hainan People's Hospital. “Maybe he didn't really want to jump. It was the watchers' disturbance and jeers that enraged him!” a resident, who witnessed the whole scene, said with anger.

At 11:18 a.m., the man lifted his leg and tried a couple of moves to jump, but this caused some watchers to roar, some individuals even shouted loudly, “Come on, jump!”

At 11:20 a.m., the young man became angry. He held the window frame with his right hand and pointed with his left hand to the people who watched below, said something but nobody could hear his voice, and then suddenly jumped to his death.

A similar situation also happened in Xiangtan City, Hunan Province in 2003 and was videotaped. A man prepared to commit suicide by jumping from a building in Xiangtan. In response to a few hundred people shouting “Come on, jump!” or “I cannot wait to see,” the man jumped out of the building to his death. Another impassioned cheer was again heard from the watching crowd.

At 3:30 p.m. on Nov. 19, 2006, a woman jumped into an artificial river at the intersection of Liancheng Street and College Road in Xuchang City, Henan Province. Hundreds of people watched. Many people chatted and laughed as they watched firefighters save her.

Within only one year, multiple tragic scenes occurred in the provinces of Sichuan, Hainan, Henan and Guangxi. Some people posted a comment on the Internet, “When those watchers' coldness and indifference turned into numbness, and the numbness then turned into a distorted soul, we cannot help but ask: Why has the morality of those people degenerated to such a degree that they, facing loss of life, acted so callously?”

Some surfers questioned, “If the suicider who jumped from the building were your relative, father, husband, or son, would you still hope for him to jump down?”