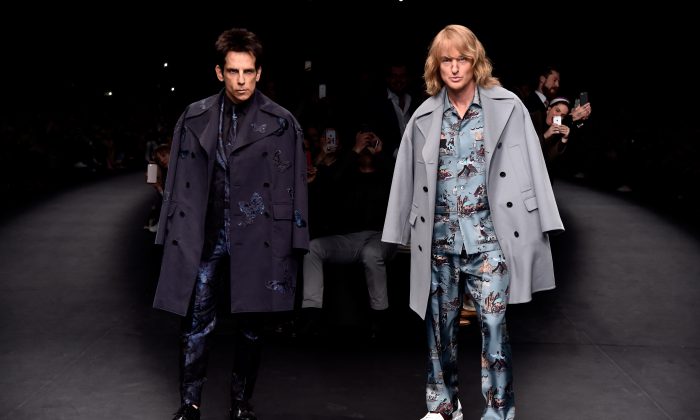 Is the Fashion World Finally Getting a Sense of Humor?

As Fashion Week in Paris drew to a close along with this spring fashion season, the reinvention and reawakening of several major fashion players was very much the talk of the town. But it was the appearance of two purely fictional fashion icons that truly stole the show.

The Zoolander cameo at the Valentino show prompted the biggest furore. The film and fashion worlds collided as fantasy fashion icons, Derek Zoolander and Hansel, appeared in its Womenswear Spring/Summer 2016 catwalk finale.

Was this a mere publicity stunt, or was it an ironic fashion statement?

Whatever it was, the robotic—and seemingly never-ending parades of po-faced androgyne models that have graced the runways of the four major fashion capitals over the past month—melted away as the industry appeared, even if only for a moment, to crack a smile and lighten up.

The response on social media was instantaneous, with messages and clips from the show broadcast globally across all the major channels.

Not since Robert Altman’s famous fashion film flop Prêt-à-Porter in 1994, in which a whole gaggle of famous fashion faces overacting alongside Hollywood’s finest, have we seen fictitious fashion personae melded together with the real-life fashion world.

The September Issue (2009), is perhaps the film that best echoes the atmosphere in fashion over the last two decades. The documentary, which followed Vogue’s editor-in-chief Anna Wintour, painted a serious and dedicated portrait of an industry which is influential and powerful in equal measure.

But today, Prada-clad “Devils” aside, the industry seems to be approaching some kind of creative and transformative epiphany. There has been an explosion of newer, leaner brooms sweeping the ateliers of the major fashion houses and letting some light and air back in.

“Super brands,” such as Valentino, Gucci, Dior, and Yves Saint Laurent are being transformed beyond recognition by a hungry, innovative and much younger stable of creative talent.

Hedi Slimane at Saint Laurent created shockwaves that were felt throughout the industry by daring to change the very name of the iconic house back to Saint Laurent Paris, removing the persona of Yves himself and repositioning the house as a brand.

Similarly the nature of the Valentino brand, and the look of the clothes it produces, have changed dramatically since the retirement of Valentino himself. The very identity of the house, and that of its customer, has been radicalized, almost by stealth, under the creative directorship of Maria Grazia Chiuri and Pierpaolo Piccioli. The duo notably hired the original British maverick, David Bailey, to shoot their 2014 campaign because of his punk aesthetic and attitude.

With grungy girls pounding the runways at Saint Laurent and Raf Simons, and 60s sci-fi mavens storming the floor at Dior, fashion—as ever—seems to be reliving its past. But of course, when it comes to fashion, is there ever anything really new?

The answer may be the notion that fashion can always be interpreted as a very subtle form of pastiche. And in that, in self-imitation, there has to be room for a certain sense of satire. This is something that has been neglected in some quarters: Innovation for the sake of innovation had taken hold. But fashion houses appear to be reveling in their own reinvention by creating sparky and funny reimaginings of the work of their pioneering founders.

This blending of high-fashion values—and the principals of couture—whipped-up with a sense of irony and the faint glimmer of an actual sense of humor is certainly interesting. And the appearance of Derek Zoolander on the catwalk isn’t the only hint of this—the most blatant example is Jeremy Scott’s work at Moschino bringing Barbie and McDonald’s on to the runway.

So, are we witnessing a fashion revolution? Perhaps, but the foundations are far from shifting. What’s next? Oh, that’s right. Huge profit increases.

Instagram, Snapchat, and Facebook transport targeted messages from fashion’s catwalks all over the globe in the blink of a beautifully made-up eye: The international publicity web of influence is all-powerful. With 2.7 million followers, the Valentino Instagram account operates as a powerful communicative tool for the brand. And, as a single image of Stiller and Wilson on the account gained 44,792 likes in one day, we can see the power of satire at work.

For Maison Valentino, a once traditional and still-revered Italian powerhouse, a new age is dawning. The embrace of social media’s power and the ironic connection between the worlds of high fashion and Hollywood, demonstrate that one can make fantastic clothing, but that it’s okay, even desirable, to let one’s “poker face” slip every now and again. And at least it makes following fashion just that bit more amusing.

This article was originally published on TheConversation.com.