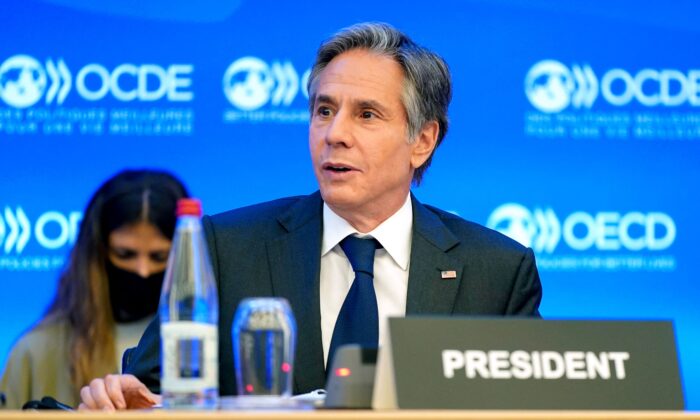 US Secretary of State Antony Blinken speaks during a closing session at the Organisation for Economic Cooperation and Development's Ministerial Council Meeting in Paris on Oct. 6, 2021. (Patrick Semansky/POOL/AFP via Getty Images)
Australia

Is the Blue Dot Network America’s Answer to Belt and Road?

U.S. Secretary of State Antony Blinken has put China’s Belt and Road Initiative (BRI) on notice after announcing that the U.S.-led Blue Dot Network would be seeking to help bridge the global infrastructure investment gap and establish a vehicle for market-driven and sustainable infrastructure projects.

“At a time when others are driving an approach to infrastructure projects and developing economies in which overseas companies import their own labor, extract resources, fail to consult with communities, end up driving countries into debt, we’re here today because we’re championing a different approach.”

This follows the Quadrilateral Security Dialogue between the United States, Japan, India and Australia in which championing of the Blue Dot Network was highlighted.

What is the Blue Dot Network?

The Blue Dot Network (also known colloquially as the Network) was announced in 2019 as an alternative to China’s BRI.

Under the BRI, the Chinese regime and its state-owned enterprises support international projects directly by providing materials, labour, and cash.

However, corruption in procurement and alleged predatory lending by the Chinese regime has resulted in the construction of unproductive assets, with some governments unable to service the infrastructure loans.

The most famous example is the Hambantota port in Sri Lanka, funded under the BRI and which was ultimately handed back to a Chinese firm under a 99-year lease. Many suggest this is an example of Chinese debt-diplomacy, though others dispute this characterization.

In contrast, the Network aims to provide a globally recognized evaluation and certification system for infrastructure and development projects.

Led by the United States, Japan, and Australia, and administered by the OECD, it is hoped the program will help countries avoid debt-dependency by providing a framework to assess proposed development projects against a range of criteria such as transparency, governance, labour rights, and value for money.

The OECD has argued that the Network will “support and attract investment into quality infrastructure through the establishment of a voluntary, private-sector-focused and government-supported certification scheme.”

OECD Secretary-General Matthias Cormann, and Australia’s former finance minister, also said that the Network “provides a common platform for ensuring projects are built consistent with our shared commitment to the environment and human rights, the rule of law, transparency, and market-based principles.”

Financing the Program a Potential Problem

However, critics of the Network point to one significant flaw in the program—the lack of direct funding to support it.

While reliable figures for the BRI are impossible to obtain, the World Bank has estimated (pdf) that as of 2019, some US$575 billion had been directly invested by the Chinese regime into the scheme.

In comparison, the Blue Dot Network will not finance projects directly. Instead, the Network aims to mobilize investment from the private sector.

To this end, the OECD in June launched the Executive Consultation Group to provide high-level guidance for the Network.

The launch was attended by 150 global executives that manage around US$12 trillion in assets.

Brendan Bechtel, the CEO of America’s largest construction company, Bechtel Group Inc., said he believes the Blue Dot Network certification system will make it a lot easier for construction firms to compete in a global market where currently ethical firms are being pushed out of the market.

“One of the reasons we’re so supportive of Blue Dot is that we think certification helps promote a more virtuous cycle by really elevating these values of transparency, of worker safety and the safety of the physical assets that you’re building for the public, of respecting human and labor rights, of taking responsible ESG actions, and, of course, building capacity in local industry and local government,” Bechtel said.

It remains to be seen whether the Blue Dot Network can dilute the power of the Chinese regime in the global infrastructure market. But it is believed that as the Network certification becomes more widely adopted, sources of infrastructure capital are likely to shift as certification will inform the investment decisions of private firms.

Further governments seeking infrastructure development will have a framework for assessing prospective projects to avoid falling into debt-dependency.