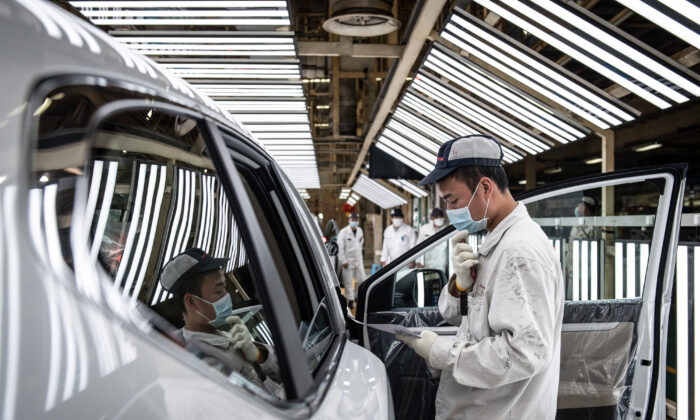 An employee wearing a face mask works on an assembly line at an auto plant of Dongfeng Honda in Wuhan city, Hubei Province, China, on April 7, 2020. (Photo by STR/AFP via Getty Images)
China Business & Economy

The global auto industry is currently mired in a crisis worse than the 2008 financial crisis.

J.D. Power & Associates, an industry research firm, estimated that since the outbreak of the CCP (Chinese Communist Party) virus, auto dealers have sold almost 800,000 fewer cars and trucks than its 2020 forecast.

Virtually every auto plant in the United States has been shut since the end of March due to the pandemic. This unprecedented measure has sent auto production plummeting to levels not seen since World War II. Industry analysts expect a gradual reopening of assembly plants over the next few months, but it may take months, if not years, for production to climb back to pre-pandemic levels.

The challenges faced by the auto industry are multifaceted. Firstly, factories and assembly plants have been shut down. Secondly, car dealerships are closed to foot traffic in most states. Sales have moved online with curbside deliveries. But sales are just a fraction of normal levels, as unsold vehicle inventories are piling up at dealerships across the country.

Ten million people in the U.S. auto industry, including those employed at manufacturers, parts suppliers, dealerships, and other businesses have been put out of work due to the pandemic, according to a Bloomberg report. IHS Markit estimated that April’s vehicle production in North America was only 4,300, the lowest total since 1945 during World War II.

“Fleet sales,” or car sales to rental car agencies, make up a portion of total sales to automakers. But that channel has all but dried up. Bloomberg reported that Avis Budget, Hertz, and Enterprise—three of the largest car rental agencies—have notified U.S. automakers to call off their planned purchases through the summer.

Every major automaker has seen its sales plummet in April. Hyundai Motor America posted a 39 percent sales decline in April from a year ago; Mazda North America announced a sales slump of 45 percent in April year-over-year; Toyota Motor North America saw its April sales drop 54 percent last month; while Honda sales also fell 54 percent. The big three U.S. automakers—General Motors, Ford, and FCA US—have not yet disclosed their respective April sales figures, although they are believed to be similarly down year-over-year.

At a macro level, such widespread calamity within a single industry should bring some pause and introspection to executives and economists.

In an April 26 editorial, The Epoch Times suggested that intimate engagement with the Chinese Communist Party (CCP) and China—where the virus originated—could be a factor in the pandemic’s spread.

“All regions that are hard-hit by the virus outside China are those having intimate ties with the CCP, those who have supported the CCP in terms of trade, investment, or helping the CCP improve its international image. Likewise, individuals who have been the CCP’s supporters often find themselves vulnerable to the CCP virus,” the column states.

If this correlation is true, then could the global auto industry’s reliance on its China sales, and the acquiescence of technology to the CCP’s state-owned enterprises, play a part in the current industry downturn?

China’s 1.4 billion people have always been a draw. Ever since American Motors (shuttered after being acquired by Chrysler) formed the first foreign joint venture in China in 1984 to manufacture “Beijing Jeep” vehicles, automakers have been eyeing the potential of the Chinese market.

In the fiscal first quarter of 2020, GM reported a net profit of $294 million, a whopping 87 percent decline from a year ago. GM issued $4 billion in new bonds last week to shore up its financial position.

But GM’s China operations have already been under pressure before the CCP virus hit, due to the country’s slowing auto market and the trade war. Profitability had declined and GM has lost market share, CFO Dhivya Suryadevara said during a February conference call with Wall Street analysts. In addition, the CCP’s restrictive policies also mandate a one-year delay in dividend payments to the parent company.

Despite U.S. government support during the financial crisis and a relatively healthy U.S. auto sales market over the last few years, automakers have been moving jobs away from the United States and to countries such as China. Ford is building its Focus compact car in China, not in Mexico or Michigan. GM employs 58,000 workers in China, as of mid-2019, which is almost 20 percent more than the 49,000 union workers it has in the United States.

German auto giant Volkswagen’s first-quarter 2020 sales fell 23 percent globally, and its operating profit declined 81 percent compared to 2019. Volkswagen, whose FAW-Volkswagen joint-venture is one of the biggest foreign automakers in China with 3.2 million vehicle deliveries in 2019, has restarted production in China this month.

Global economies hope for a V-shaped economic recovery and healthy communities, but there is great uncertainty. While sales and profits could ebb and flow on a monthly or quarterly basis, the virus and the associated public health crisis could loom longer and cripple the long-term outlook and health of companies and economies.

Investors, board members, and company executives must take a long-term view regarding the well-being of the companies they steward. Reassessing their relationships with the CCP could well be part of the antidote.