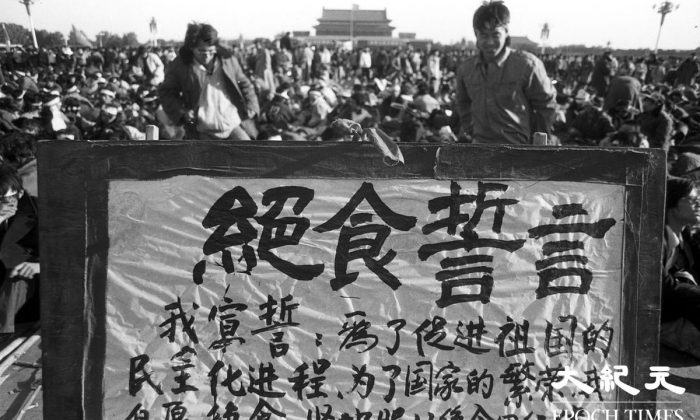 Students are standing behind the post which wrote their vows to protest for democracy by hunger strike at Tiananmen Square of Beijing, China, in June 1989. (Provided by Liu Jian/The Epoch Times)
Thinking About China

In memory of the Tiananmen Square protesters and massacre

Most recall the famous phrase “resistance is futile” that derives from various science fiction movies, including “Star Trek: First Contact.” But is resistance futile?

Under the Chinese Communist Party (CCP), the mantra sold to the Chinese people that resistance to the CCP is futile and to the world is that the CCP system is the best form of government by arguing that economic development and political stability can coexist without a democratic system. Let’s pick apart this argument.

COVID-19 started to spread in China before the 2022 Olympics. In January, Hong Kong, Xi’an, and Beijing began to report COVID cases with concurrent massive lockdowns. Eventually, COVID spread to Shanghai, where the terrors of CCP population control were seen on social media (see Twitter hashtags #Shanghai, #CCPVirus, #ChinaOUT, #ChinaExposed, and others) that escaped the CCP censors. Now, COVID is spreading to many other cities, including back to Beijing.

According to the Financial Times, the CCP is enforcing full or partial lockdowns in at least 46 cities across the country, with these restrictions affecting up to 345 million people. That is more than the entire U.S. population of 330 million! Shanghai was the most important economic port city in China, and now it is a shambles. So much for economic stability.

With Chairman Xi Jinping’s “Zero-COVID” policy, more people are dying from starvation, suicide, and beatings than would have died from the less lethal current Omicron strain of COVID-19.

Ironically, the Omicron strain should have been called Xi, according to the naming convention that the World Health Organization (WHO) created for COVID-19 strains. For those less familiar with the Greek alphabet, here are the first 16 of 24 letters: alpha, beta, gamma, delta, epsilon, zeta, eta, theta, iota, kappa, lambda, mu, nu, xi, omicron, and pi.

According to the WHO, Xi was skipped because it was too close to many people’s last names, and the WHO didn’t want to offend anyone. The Omicron variant that would have been called Xi will probably cause the downfall of the CCP leader because of his zero-tolerance policy.

But the facts about the extreme chaos occurring in China are being erased and purged from the internet by the CCP. Searching banned topics such as the over 2,000 keywords related to COVID will get you arrested. So another casualty of communism is the truth and political stability.

The truth about the Tiananmen Square massacre in which thousands of people were killed in 1989 is erased from the memory of the CCP-controlled media. In China, people would get arrested for writing about it, showing any imagery such as the iconic person who stood in front of a tank or a candle on their social media account around June 4, and referring to May 35th, 63+1, 65-1, and 60+4 (which refer to the date 6/4).

The next casualty of communism is freedom of speech, assembly, and thought. The list of forbidden topics gets bigger every year. Hopefully, the list will become so large that the CCP will implode from trying to censor too many forbidden thoughts.

Related to the Tiananmen censorship, the CCP cannot handle any criticism, especially from the press. According to the 2021 annual Reporters Without Borders (RSF) report, out of the 478 journalists and media workers in jails around the world, China has “more than 115 currently detained, often in conditions that pose a threat to their lives.” As of April 27, 2022, the number had increased to 124 journalists.

China ranks almost at the bottom of the RSF list of World Press Freedom Index at 177th out of 180 countries, and, for the fifth consecutive year, China incarcerates the greatest number of journalists in the world.

In a dedicated December 2021 exposé on China called “The Great Leap Backwards of Journalism in China,” RSF describes how Beijing declared war on journalism, the loss of press freedoms in Hong Kong, and how accessing information/data is a crime in China.

In 2021, Burma (commonly known as Myanmar) was the second-worst country for jailing journalists. What’s the CCP connection? In 2020, Burma had imprisoned only two journalists. But after the February 2021 coup, 53 journalists were jailed with the advice and assistance of the CCP. A free press is also a casualty of the CCP.

The CCP leaders have become so obsessed with any criticism that people are jailed for offending the “great leader.” Just like all CCP leaders, Xi is prickly about being offended. References or pictures of Winnie the Pooh are banned in China because they are used to ridicule Xi over their physical resemblance.

When pro-democracy protesters in Hong Kong showed up on the streets, many wore Pooh masks or split Pooh-Xi masks. In an authoritarian state, demonstrating against the government is not only forbidden but mocking the leader is a double whammy. Freedom to demonstrate and to remove political leaders are victims of the CCP.

The CCP has outlawed religion, viewing it as a defective thought, and wants the Chinese people to “believe” in communism with Chinese characteristics.

According to the 2022 Annual Report of the U.S. Commission on International Religious Freedom (USCIRF), which came out in April 2022, the CCP is implementing its “sinicization of religion” policy that demands “religious groups and adherents support the Chinese Communist Party’s (CCP) rule and ideology.”

The CCP views religion as a threat to its power and is continuously conducting persecutions against all believers, who constitute over 30 percent of their population: about 18 percent are Buddhist (including Tibetan Buddhists), 5.5 percent are Falun Gong (or 70 million, based on official estimates before the persecution began in 1999), 5 percent are Christian, 2 percent are Muslim, Taoism, and others, including folk religion. Freedom of religion under the CCP is converted to mental enslavement.

The CCP wants people to believe that the CCP is infallible and the leader is God incarnate, making sure that everyone in China can recite pithy nonsense such as the “Red Book” written by Mao Zedong or the “Study (Xi) Strong Country” downloadable. app full of quotes from Xi. All CCP members (over 95 million), all government employees, teachers, state-owned company employees, and others are required to download the app. Who knows what authoritarian monitoring malware is embedded in the app? Xi so desperately wants to be like Mao (or really better than him) that the CCP is now making all government decisions based on his sayings.

Is resistance futile? Until all people under communism are free, resistance is worthwhile. I salute all Chinese people, whether in China or outside, who resist communism.

“I would rather die standing than live on my knees.” Emiliano Zapata Salazar