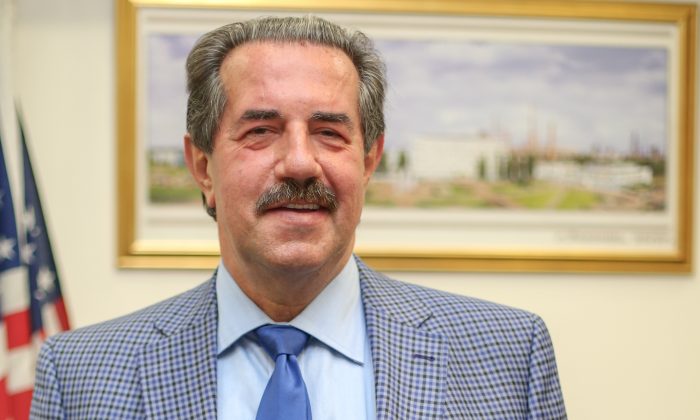 He made his money producing fertilizer in Eastern Europe after the fall of the Iron Curtain. Now Alexander Rovt deploys his fortune of more than $1.3 billion in New York real estate.

Having grown up in Soviet Carpathia in what is now Ukraine, Rovt fled to the United States in 1985 because of the communist suppression of capitalism.

Based in New York, he immersed himself in the American spirit of capitalism and made a fortune, always sticking to his own conservative principles.

What is your investment philosophy?

You see the Bible says you should keep your money this way: “One third in gold, one third in real estate and one third cash.”

I am not following that. Gold for me is the same like stock market. Going up and going down. I’m not saying that gold will go further down. What should you do to buy for the money from one ton of gold—keep it and wait until it comes up and then sell it?

No, you will not sell it. It’s an old fashioned way to invest. In my opinion the best investment and more conservative is real estate. Where? That’s a different story.

More in the countries that have a stable political condition such as the United States. That’s why most of my investments are here. But not just here, I invest in other cities also. Why is most of it in New York? Because here I can touch. I can go; I can see it; and I can understand.

However, I bought the 14 Wall Street and I didn’t even go and see it. Why should I go and see it, I am not a construction engineer. I saw the figures and I saw the papers. What is the income? And when I bought it was 68 percent occupancy. Today it’s 93. And we’ve owned it for almost two years.

And I can sell the building now for a big profit. I will not see it though. First of all, half of the money you pay immediately to Uncle Sam. Number 2; you don’t have a place to put the money.

The law says if you buy something bigger in six month you don’t have to pay tax. But where is something bigger. Even today in the United States you can’t buy something for half a billion dollars one, two, three. So either you overpay and then it’s not worth it or you just stay with it.

What about the NY real estate market?

You have to understand and consider that New York is the world’s business center. Will it go up and will it go down? Yes. In my opinion we are now close to the peak of the market.

But if you don’t have a mortgage on your building and the prices come down you don’t make less. You make the same. You can lose if you sell the building.

What if tenants leave?

Yes, tenants can leave and then you can lower the rent. So you will make less but you will not lose.   To make less and to lose is a big difference. This is the simple answer of it.

Would you buy now?

Where I don’t want to go is production because production needs your time. I was 30 years in fertilizer production. You have to pay attention. On top of this you have to watch the trading; it’s not simple.

It’s easy to say: He has 100 people working for him. But if you leave it to these 100 people it will not be 100 percent successful. It will be successful but not 100 percent. You have to oversee everything. And if I can oversee something, I will do it. As soon as I cannot oversee, it’s not interesting anymore for me.

Why do you think so many Chinese people are buying New York real estate?

You see 10, 15, or 20 years ago mostly Russian people bought NY real estate. Now it’s the Chinese and they are doing it in a smart way.

Why is this happening? Because they don’t trust 100 percent their own system. Maybe tomorrow all the industries in China will be nationalized. Over here, in the United States, it will never happen that the government says “Oh, we don’t have money; we have to take production away from someone.”

This is why they have more security here and this is why they are moving here. They move not just to the United States, but to Western European countries also—mostly to the U.K.

But primarily New York because it is always booming. You see, during the 2008 crisis, Florida collapsed, real estate was nowhere. New York came down a little and then slowly started to go up again, even during the crisis.

People are smart today and Chinese people are especially smart. So they know where to go. This is why they want to invest here. Why real estate? Because real estate is less risky.

Can you compare Chinese capital flight to what happened in the Soviet Union?

I will say that significantly more is coming from China. Because Russians weren’t investing here in the real estate business. They were investing for their own. They bought apartments for $100 million, for $88 million for $50 million. But I don’t know except for Lukoil, which is an oil company, someone who invested significantly in the United States economy.

Why? Because they can still make money in Russia and pay less in taxes or not pay at all. Over here, you have to pay.

I will not say China is close to collapsing. I think for a long time you see that China’s economy now stopped growing. Two years before it was growing dramatically. Now it stopped, it’s standing still. The question is, “If there are no changes, will it go down?”

The system is still a hybrid. The Communist Party is the ruling party. At the same time you have a fully capitalist system.

In five years we will know whether it’s going to work out.  But it’s safer for them to come here.

What’s your take on Europe, Russia, and Ukraine?

Russia just has five main things they can export—oil, gas, gold, diamonds, and weapons. Weapons they can just export to developing countries, not so much to China.

But the other things, everybody needs. With the oil and gas, the Russians are pushing to take over Europe economically. Europe needed 10 years to wake up. Now they are waking up and the United States also understands, “Tomorrow Russia will tell us they will just close the wells. We are dependent on Russia.”

The whole renewable energy industry just came about because the oil price kept going up and up and up.

If I was the president of the United States today, I would sit in a plane and go to Saudi Arabia, Iran, and Iraq and say, “Let’s produce one or two million barrels per day more and let’s bring the price of oil down to $60 or $70.”

Russia will collapse. They are not exporting manufactured products; they don’t sell cars, no textile—nothing. They are trying to make something, but nobody is buying because it’s either expensive or not good.

At the same time you cannot say Russian people are stupid. They always had great scientists etc. The system is not working. Again it’s a hybrid like in China. It’s not the Communist Party in Russia but still there is only one party ruling. The rest of the parties don’t make any decisions. And this holds back investments from outside.

What can Europe and the United States do?

They say, “We don’t want to depend on Russia, we will use shale gas from the United States.”

This is possible but it cannot be done in two seconds. I estimate it will take at least five years.

Alexander Rovt is the president of IBE Trade Corp., a consulting company, and the owner of 14 Wall Street. According to him, his fortune is currently larger than the $1.3 billion estimated by Forbes in 2012.