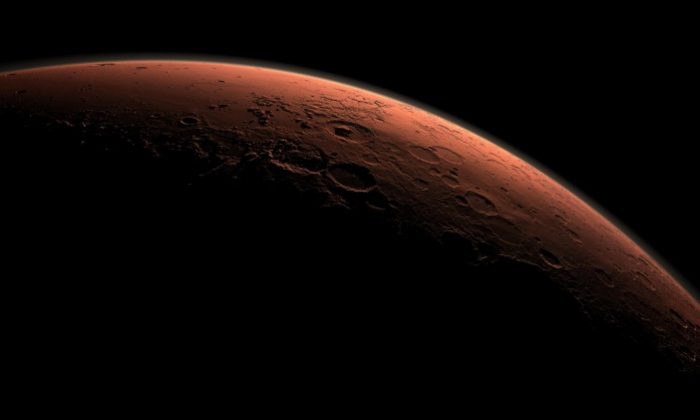 A computer-generated view depicting part of Mars at the boundary between darkness and daylight, with an area including Gale Crater. (NASA/JPL-Caltech)
Science

Is Life on Mars Hiding in Asteroid Craters?

The distribution of microbes deep below the Chesapeake Bay crater on Earth has led scientists to speculate that similar environments on Mars may yield information about the Red Planet’s past and present habitability.

The U.S. site was impacted by an asteroid over 35 million years ago and is one of the largest known craters in the world.

Led by Charles Cockell at Scotland’s University of Edinburgh, an international team of researchers investigated the bedrock beneath the Chesapeake Bay impact crater by drilling 1.76 km (nearly 1.1 miles) below the surface to collect samples, using stringent controls to prevent contamination.

They found that microorganisms were scattered unevenly through this region of the subsurface, with a distribution seemingly influenced by the impact, and believe this may mean the environment is still recovering from the event.

“We didn’t expect to see an increase in numbers deep below the surface, so that was a surprise—we just expected the usual decline in numbers as you go deeper,” said Cockell, who has an interest in life in extreme environments, via email.

Although the collision would have obliterated all life at the surface, it created deep rock fractures where nutrients and water could accumulate to sustain life.

Such sheltered underground habitats would act as environmental refuges, extending the depth of the biosphere and protecting anything down there from life-threatening events above such as ice ages and global warming periods.

“The deeply fractured areas around impact craters can provide a safe haven in which microbes can flourish for long periods of time,” said Cockell in a press release. “Our findings suggest that the subsurface of craters on Mars might be a promising place to search for evidence of life.”

Despite the presence of craters on other planets and on the moon, the conditions on Mars are believed to be more conducive to life.

“There is evidence for liquid water in the past history of Mars and so that’s the most plausible location for life,” Cockell explained via email. He said scientists would probably need to drill over a kilometer (over 0.6 miles) on Mars, “so it would be quite an ambitious objective.”

Some scientists are fearful of contaminating Mars with microbes from Earth. Also, drilling is quite an invasive technique and could alter the balance of any life below and on the surface of Mars.

“Yes, this might be a problem and it would be prudent to prevent contamination of the deep subsurface of Mars, particularly if there is an indigenous biosphere on the planet.”

The results were published in Astrobiology on April 16.