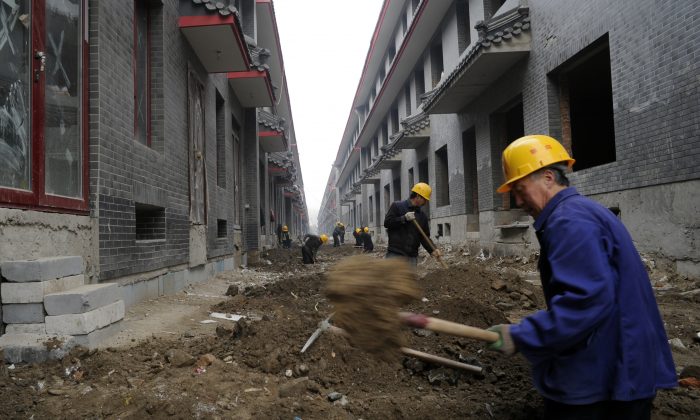 Workers go about their chores at a construction site for new shops in Beijing on November 28, 2011. (Goh Chai Hin/AFP/Getty Images)
Business & Economy

Is Kaisa the First of Many Chinese Property Developers to Default?

The Chinese property developer Kaisa Group Holdings Ltd. boldly promises to “bring you joyful living.” For some of its international bond holders, the reverse seems to be the case as two of its U.S. dollar bonds officially defaulted on April 20.

This is the first default of a Chinese property developer, although Evergrande has come close recently and the problems of the Chinese real estate market seem to get ever worse. In this case, Kaisa only missed two separate interest payments worth $52 million on notes denominated in U.S. dollars.

It is also not in a hurry to rectify the situation despite the fact it still has $2.1 billion in foreign denominated debt outstanding and is asking for a standstill:

“The Company is focused on facilitating the release of its 2014 audited financial results and following that release, will continue its efforts to reach a consensual restructuring of its outstanding debts,” a company statement released on the Hong Kong stock exchange reads.

Chinese property developers have roughly $21.3 billion of foreign bonds outstanding, and the question is why. Why raise money abroad when all of your revenue comes from China? A lower interest rate in the U.S. dollar market might be one answer.

Whatever the case, U.S. rating agencies Standard and Poor’s as well as Moody’s gave the company a junk rating, however, with a stable outlook, according to the last quarterly report published in September of 2014. International investors dug in and are now paying the piper, despite the company’s “proactive strategies” managing their liabilities. Astute traders who bought at the bottom in January, though, are making money as the market hopes for a restructuring.

According to U.S. economist Richard Vague, things are going to get worse from here: “Housing values in China increased on the same perilous trajectory as in the United States before 2008 and Japan before 1991—and they have now started a similar decline,” he writes.

As house prices decline, developer debt will turn sour. And other companies will follow in Kaisa’s footsteps.