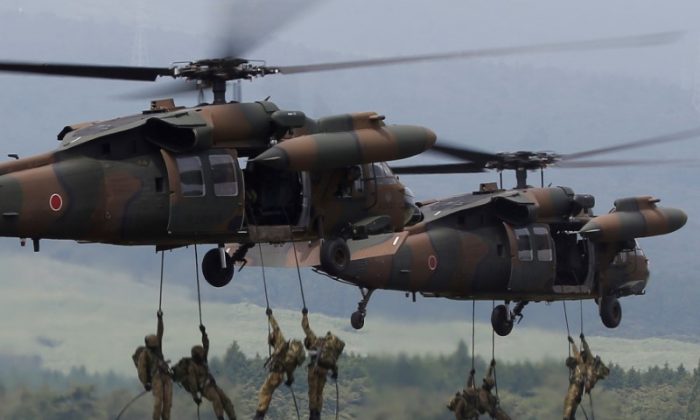 Japan wakes up—sort of. The Ministry of Defense submitted a record defense budget request this year.

An optimist would suggest that at least Japan realizes it needs more money for defense. However, beyond that it’s hard to be too positive. The request was in the 2.6 percent increase range. And this is before Ministry of Finance is done adjusting that amount. Japanese defense budgets have been woefully underfunded for decades.

Japanese officials make much of “consecutive annual increases” during the Abe administration and during the Suga administration. However, these increases have been tiny—and illusory. Japan, in fact, cut its defense budget every year for the decade before Shinzo Abe took over. So he was just trying to dig Japanese defense spending out of a hole. Compared to when Abe took office, Japanese defense spending has not increased very much at all. Something like a 15 percent increase overall. If your investment adviser earned you 15 percent after a decade, you’d fire him.

How much should Japan be spending? Roughly twice what it is now. So 10 percent increases for the next five years. As you can see, a 2 percent increase doesn’t mean a whole lot when viewed in context.

Such is the result of Japan’s longtime pathologic dependence on the Americans for defense.

What Are the Most Notable Items in the Budget Request?

The most notable aspect is that it does NOT call for spending what’s needed to make service in the Japan Self Defense Force (JSDF) a respected profession. Personnel needs to be the priority. JSDF misses recruitment targets by 20 to 25 percent annually. That’s not surprising. Speaking with just a little hyperbole, Jieikan (JSDF service members) are treated like serfs, are overworked, and get little respect. Few Japanese even have any idea about JSDF terms of service. If you don’t get personnel “right,” there aren’t any magic weapons that you can buy to protect yourself.

As second priority, the budget should specifically call for funding (and achieving) “capability development” so JSDF can conduct “joint operations” (air, sea, ground can operate together) and ensure adequate training opportunities and training locations in Japan. The budget request (once again) doesn’t seem to focus on this requirement.

Japan’s third priority should be hardware. But unfortunately, this is what Japanese defense budgets put as first, second, and third priorities. The budget does call for buying F-35 aircraft, some ships, and also spending on hypersonic weapons, advanced fighter development, cyber technology, and outer space capabilities. It checks all the boxes, but these are either token expenditures or else just buying “shiny objects” without serious consideration of what Japan actually needs to defend itself in light of current and future threats—and then putting it all together into a properly configured force and employed in a coherent way.

Japan’s Rhetoric on China Has Changed

Japan’s rhetoric on China, especially its concerns regarding Taiwan, has changed notably over the last year. What is the reason for this?

In broad terms, Japan’s ruling class has finally woken up to the threat China poses. Of course, there have been Japanese officials, military officers, and others who have long understood the threat. But now it appears that the danger is widely enough recognized that the aforementioned people can speak publicly and loudly. The Japanese public has recognized the danger for a long time. Nagato-cho (Japan’s “Capitol Hill”), as usual, took time to figure out what most people already knew.

How Significant Is the Change?

This is significant. Anthropologists will tell you that the Japanese preference is to avoid talking about (or thinking about) difficult subjects. So the strong, clear statements by people like Defense Minister Nobuo Kishi, Vice Defense Minister Yasuhide Nakayama, Diet member Masahisa Sato, Deputy Prime Minister Taro Aso, and others do represent something of a sea change.

However, there is scant evidence that the statements are translating into enough concrete capability improvements or activities needed for Japan to effectively respond to a Taiwan “scenario”—either by itself or along with the Americans. There doesn’t even appear to be a joint operational plan to coordinate U.S.-Japanese operations—and there certainly is no joint headquarters anywhere where the two nations’ forces will conduct a joint defense of anything. This is an astonishing failure on the part of leaders—civilian and military—on both sides. So unfortunately, it’s so far mostly talk—even if it is good talk.

What are the implications of Japan’s shifting approach to China for its defense spending and regional security cooperation?

As noted, Japanese defense spending isn’t at all in line with the nation’s requirements for addressing the regional threats to Japan or to make up for decades of underfunding defense.

The JSDF is getting out and about in the region more than ever before, but it lacks resources (manpower and hardware) and capability. Linking up and doing joint training and other engagements with the French, the British, the Australians, and the Indians are a good thing—and would have been thought impossible not so long ago. But unfortunately, Tokyo seems to think that having “friends” makes up for Japan’s defense shortcomings—and thus Japan doesn’t feel the need to do more than it is already doing. This brings to mind a former U.S. official once describing the Japanese penchant for Japan as “figuring out the minimum it needs to do … and then doing a little less.”

Hopefully, one of these days Japan will get things right, and in its own way it’s trying. But time is running short.

Is an Asia-Pacific Arms Race Brewing? A New Cold War?

An arms race? Not really. The Chinese build-up over the last 20 to 30 years has been the biggest, fastest in history—and despite the People’s Republic of China (PRC) facing no enemies. Nowadays, the few countries that have woken up—Australia and Japan—are just trying to protect themselves. The Chinese are way ahead of them, unfortunately. Even the Americans are playing catch up. A senior U.S. Air Force General recently said, “We are out of time” (China has caught up).

A new cold war? Yes. One can debate the terminology, but one fairly suggests the PRC has been conducting a multifaceted war on multiple fronts for the last 30 years against the United States (and every other country in the region).

We may have not wanted to admit it or to call it a “war”—preferring “competition” instead—but Beijing will tell you it has been a war to defeat its main enemy—the United States—and to teach the Japanese a lesson (and take back the Ryukyu Islands). The only thing missing is the shooting. But from Beijing’s perspective, do things right and the war will be over without any fighting—since nobody (including Washington) will be able to resist at any reasonable cost.