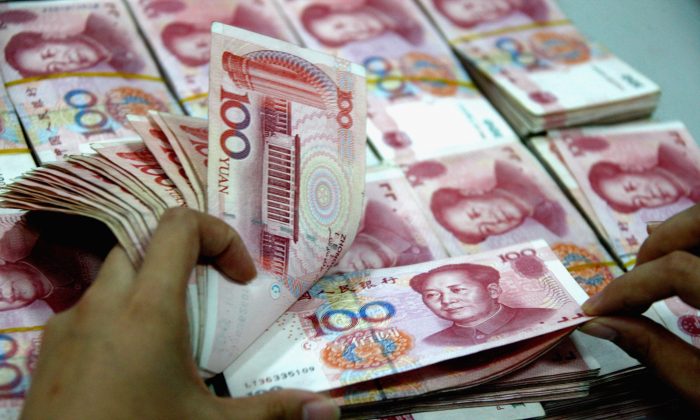 By the middle of 2015, it has become clear that all is not well in the land of China. The signs are now increasing that China will soon engage in its own form of quantitative easing, in what could be seen as a sign of panic.

To illustrate how dire the situation is: The United States used quantitative easing after the country was hit by the worst crisis since the Great Depression. Europe started its form of easing at a point when the common euro currency was about to collapse. Japan has tried—and failed—QE intermittently to get itself out of a 20-year stagnation.

And China needs to do QE when official growth is still above 7 percent? For many experts, this is a confirmation that underneath the surface, China is facing huge problems.

“This is the nonsense of the Chinese miracle economy. The very fact we are discussing the People’s Bank of China [PBOC] doing QE shows how off the boil the economy has become. The whole China dynamic has shifted,” said Fraser Howie, author of “Red Capitalism.”

So far, the program hasn’t been officially confirmed, but different media reports citing PBOC officials have shown a surprising amount of detail. As of now, the easing is targeted toward local government debt with the PBOC making loans to commercial banks. The policy would also merely be an extension of China’s current efforts to prop up the faltering economy and real estate sector.

“It’s very reflective of how the model on China has changed. They have been in denial,” Howie said, and now might be the day of reckoning.

Why Are They Really Doing It?

Officially, Chinese GDP slowed down to 7 percent during the first quarter, the lowest since the financial crisis. Most independent observers see growth rates between 5 and 6 percent. While every other country would scream with joy to see these rates, China cannot.

From a very macro level, GDP growth needs to be higher than the aggregate interest paid on debt, otherwise the debt becomes unsustainable and will eventually go into default. For many years, this was the case in China, but not anymore.

According to the “China Beige Book,” which surveys hundreds of firms and banks in China, its best estimate of the average interest rate is currently at 7.33 percent, higher than the projected GDP growth.

If this inversion happens on a macro level, the weakest players are hit first. In China’s case, these are heavily indebted local governments.

They have racked up $2.8 trillion worth of debt (30 percent of GDP) as part of the development of infrastructure and residential real estate. Many projects are not generating enough cash flow.

For example, the Survey and Research Center for China Household Finance estimates that more than one in five homes in China’s urban areas is vacant. “The loans behind the local government debt are loans to buildings that are empty, not generating cash flows. They are loans to buildings that are unproductive,” said Richard Vague, author of ‘The Next Economic Disaster” and managing partner at Gabriel Partners.

“Local governments have relied on the real estate bubble for finance. The revenue was from development from real estate. They have a transaction tax not a property tax. They rely on real estate transactions to get money,” said Jim Nolt, a senior fellow at the World Policy Institute and former dean of the New York Institute of Technology campus in Nanjing.

Most of this debt is on the balance sheet of Chinese commercial banks. By taking some of that risk off its balance sheet, the PBOC can achieve two goals at the same time. Get banks to lend to small- and medium-sized business again and take some pressure off local governments to repay their debt. If all goes well, this can spur economic growth and increase local governments’ revenue again. If all goes well.

“They are setting themselves up for a stock market crash; we just don’t know when it will happen.”
— Leland Miller, China Beige Book International

Why It Won’t Work

This is similar to what the ECB did with its infamous long-term refinancing operations (LTRO) starting at the end of 2011, although we don’t know how long term the Chinese operation is going to be. However, the result in China will be similar to the result in Europe: Do nothing for the real economy but prop up the stock market.

“That gives the banks more liquidity and that’s all it does. They can lend a little bit more, which in my opinion exacerbates the problem,” said Vague and explained:

“If you are a banker, having extra cash doesn’t do you any good. I’m not going to be surprised at all if it goes to unproductive purposes. Because frankly they ran out of productive things to spend the money on. All that’s left is speculation.”

Vague is referring to precisely the unproductive construction, which got local governments into the mess in the first place.

The Chinese government would like to think new lending would go to private enterprises but there are several reasons why this won’t happen either.

According to “China Beige Book”, most creditworthy firms are not demanding credit precisely because they do not see any worthwhile investments around. On the other hand, non-creditworthy firms need to borrow mostly to finance their existing debt load—and are paying heavily for it.

This is confirmed by a recent IMF report, which states that private firms have decreased their debt to equity ratios (or leverage) from 125 percent in 2006 to 55 percent in 2013. Large state-owned enterprises have maintained a high leverage of 110 percent. The paper notes that the worst creditors in construction and real estate have increased their leverage ratios over time.

So the private sector, which is the most efficient, has scaled back on credit, despite ample availability. And banks don’t want to lend to the rest.

“They are trying to force banks to certain businesses; it’s not a question of a slowing economy. You have an environment where banks do not want to lend to small companies, even big companies. They are not going to lend if they have more money. Only if they get money back,” said Howie.

This is similar to what happened in Europe, where banks didn’t start lending to small- and medium-sized companies, despite the ECB pumping 1 trillion euros ($1.08 trillion) into the financial system.

Instead, and like in Europe, the money could end up in the stock market. The European stock market has risen 60 percent since the start of the ECB measures at the end of 2011. Meanwhile, the economy actually went into recession for much of 2012 and 2013.

“The credit transmission mechanism is broken. If they do stimulate, the money will go into the stock market. We are not seeing any growth rebound,” said Leland Miller of the “China Beige Book.”

In fact, because of other stimulus measure, the Chinese stock market is already up more than 100 percent since the beginning of 2014. And there is more to come, as policymakers in Beijing recently secretly admitted the government is pushing stocks to solve fiscal problems.

“Money attracts money and nothing attracts money like a rising stock market. You are only getting 7 percent a year [in interest]; in the stock market you are getting that in a week. It’s going to end in chaos, but for the short term it works,” said Howie.

Miller agrees, “They are setting themselves up for a stock market crash; we just don’t know when it will happen.”