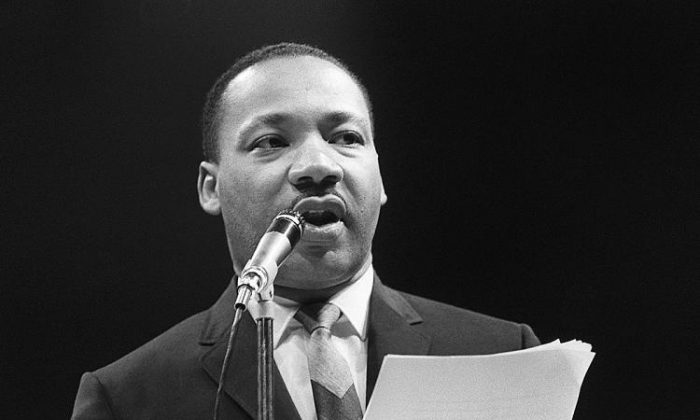 A recording of a speech by Martin Luther King (seen in this 1966 photograph) turned up at a college in Kansas. (AFP/Getty Images)
Viewpoints

Is It Possible to Find Balance in Black History Month?

In 1976, President Gerald Ford gave official federal recognition to Black History Month to “honor the too-often neglected accomplishments of black Americans in every area of endeavor throughout our history.” That’s a worthy objective.

How effectively it’s being realized undoubtedly varies from community to community.

My first “close encounter” with Black History Month happened 10 or 20 years ago. For some long-forgotten reason, I was walking down the hallway of a public high school in a nearby town. The walls were adorned with dozens of drawings about slavery. No surprise there. The abomination of slavery is the 800-pound gorilla in the room, so to speak. One simply cannot survey black history in America without facing up to that ugly reality.

Yet, I found myself wondering back then, as I do today, what other aspects and episodes of African-American history are studied in schools during Black History Month. Dr. Martin Luther King, Jr.—sure, but who else? There have been countless other African-American heroes throughout our country’s history—inspiring examples of men and women who accomplished much good despite the resistance and opposition of racist whites.

Hopefully, they also spend a little time remembering that there were whites who strove mightily to rectify the many racial injustices that have marred our country’s history.

As Black History Month 2020 draws to a close, I would like to praise a few movies that skillfully educate us about the history of white-on-black racism in the United States.

I saw “Harriet” earlier this month. Actually, I almost avoided it, because I knew its depiction of slavery would cause me grief. However, as one who favors commemorating Harriet Tubman on our country’s currency, I felt I should go. The movie was excellent—well acted, well directed, and honest. “Harriet” did justice to the real Harriet Tubman’s goodness and greatness while also portraying the sick and sickening moral idiocy of slavery.

Yes, “Harriet” was disturbing, even disorienting. I can’t understand how such evil could have ever seemed “normal” enough to be widely accepted. How could human beings sink so low as to treat other human beings worse than barnyard animals? How could they ever delude themselves into believing that human beings could be pieces of property?

I followed the U.S. space program from Alan Shepard’s first suborbital flight in 1961 through the moon landings through the shuttle era, but I never knew about the three female African-American mathematicians who were instrumental in making these flights possible until this movie came out a few years ago.

Sadly, despite their demonstrated superiority with math, those women were treated as social inferiors in the white-, male-dominated NASA bureaucracy. Incidentally, Mrs. Katherine Johnson, one of those three mathematicians, passed away this Monday at age 101. May that great mathematician, great American, and great lady rest in peace.

The Emmett Till Movie

Actually, there have been two documentary films (one in 2003, one in 2005) about the 1955 lynching of a just-turned-14 African-American from Chicago during an ill-fated trip to Mississippi.

I don’t remember which one was shown at my college a few years ago, but this story, though horrific, is a must-see for anyone who wants to see how vicious racism remained nine decades after the end of the Civil War.

The film “42” about Jackie Robinson breaking the so-called “color line” in major league baseball and the horrible abuse he endured is well known to baseball fans of my vintage, but younger Americans can benefit from seeing the story retold.

This movie gave an unsparing portrayal of the obscene superciliousness with which some whites treated their black domestic helpers. To see pathetic white people lord their whiteness as a priori evidence of their supposed superiority over people because of a racial difference was appalling. Any white person who sees that movie should feel embarrassed to be related to anyone who would behave like that.

A personal note: When my beloved aunt with whom I lived was incapacitated, she hired a black woman from Detroit to clean the house. Geneva took the bus out to lily-white Royal Oak every week. While my aunt was without prejudice and treated Geneva with kindness and respect, there was always an invisible but palpable barrier. Although African-Americans were free and could vote, it was still safer for them at that time to be humble and deferential around whites. Back then, black folks only set foot in Royal Oak to do domestic work, much like in “The Help.”

But this story has (for me at least) a happy postscript: The 2002 documentary “Standing in the Shadow of Motown”—about The Funk Brothers, the Motown house band that played on more #1 hit singles than the Beatles, Beach Boys, Rolling Stones, and Elvis combined—ended with a reunion. The surviving members of this mostly black band gathered at (of all places!) the Royal Oak Theatre on Fourth Street in Royal Oak. The racial barrier is gone!

I’m cheating a little by including this current release because I haven’t seen it. It’s still showing nearby, and by all accounts it’s a truly excellent movie (99 percent audience approval on Rotten Tomatoes), but I wasn’t sure I wanted another dose of grief so soon after “Harriet.”

“Just Mercy” tells the tragic story of a black Harvard Law School grad who forsook lucrative jobs to represent a black prisoner who had been unjustly convicted and imprisoned. The message is timely, because unlike slavery, the practice of convicting innocent blacks by legal malpractice remains a present problem. I could really rant about this, but I’ll spare you.

Anyhow, I was liberated from the feeling that I had a moral obligation to witness the miscarriage of justice in “Just Mercy” when I read a review of the movie.

Phumlani S. Langa, a South African, wrote, “Black pain … I for one don’t know how many more cinematic depictions of it I can take … as a black person I can only handle so much injustice at any given time.”

Thank you, Mr. Langa! I feel the same way. We know that unjust incarcerations and other racist acts are wrong, and that we need to do something to stop them. But if we take in too much pain in too short a time, such an emotional overdose can be harmful to ourselves and possibly those around us.

Bottom line: Films depicting the evils of racism are important and worth seeing. But monitor your intake and make sure you don’t overdo it. The healing potential of Black History Month will be maximized if we balance the bad with the good.