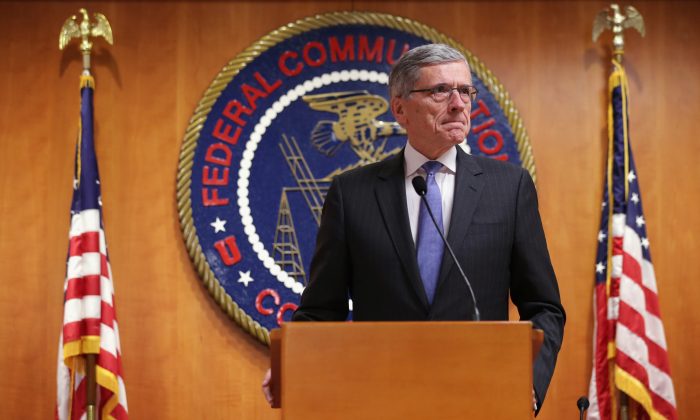 In an op-ed published in Wired magazine Wednesday Jan. 4 the Chairman of the FCC Tom Wheeler made the case for the necessity of government involvement to preserve a free and open Internet.

In it, he suggests reclassifying broadband Internet as a public utility under a “modified” Title II of the Telecommunications Act, a vague proposal that has watchers worried.

Wheeler’s opens up his op-ed writing that the conversation about Internet regulation has been going on for a decade, and the FCC has received almost 4 million comments about net neutrality.

“The time to settle the Net Neutrality question has arrived,” he declares.

Wheeler was formerly a venture capitalist, entrepreneur, and a cable company lobbyist who used to advocate on behalf of corporate concerns.

Cable companies are some of the biggest spenders in the nation. According to opensecrets.org, Comcast spent over $16 million in 2014 lobbying Congress.

In May of 2014, Wheeler was a proponent of an Internet fast lane for companies willing to pay for it, why has he suddenly changed his mind so drastically?

The only company known to have been throttled and then paid a fee to remove the throttling is Netflix. The video streaming service accounted for 34.21 percent of downstream traffic in 2014, according to the Global Internet Phenomena Report.

It is unlikely that small content producers or even independent media or bloggers would every get caught up in a throttling issue, and it is unclear how the cable companies will view the new regulations.

“I am submitting to my colleagues the strongest open internet protections ever proposed by the FCC. These enforceable, bright-line rules will ban paid prioritization, and the blocking and throttling of lawful content and services. My proposal assures the rights of internet users to go where they want, when they want, and the rights of innovators to introduce new products without asking anyone’s permission.”

In the op-ed, he goes on to explain how the FCC will “modernize Title II, tailoring it for the 21st century, in order to provide returns necessary to construct competitive networks. For example, there will be no rate regulation, no tariffs, no last-mile unbundling.”

Title II is the part of the telecommunications act that would classify the Internet as a public utility. Currently, the Internet is treated as an information service, and it has operated in a largely unregulated manner.

Supporters of Internet freedom say the Internet has seen unprecedented growth in North America precisely because of government noninterference.

“But the solution is not to get Government in this space with expanded powers to police the Internet. Internet freedom is just too precious to hand Washington new regulatory powers over the Internet without oversight,” Republican Sen. Ben Sasse stated in an email blast to Conservative supporters Wednesday morning.

Tom Wheeler has tweeted about his recent decision.

It’s time to put in place rules to preserve the #OpenInternet that has become an indispensable part of our daily lives. #TitleII

The Internet is open right now, rules are not needed to ensure that it stays that way. Regulations are generally unable to adapt fast enough to trends in technology.