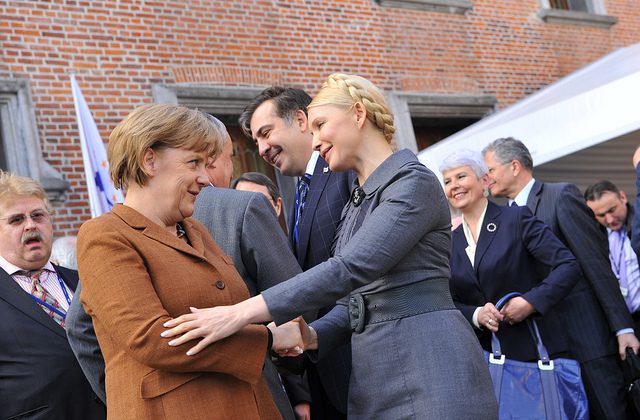 Is Europe Hiding Behind Tymoshenko?

In just two weeks, Europe’s heads of state will meet in Vilnius, Lithuania for the Eastern Partnership Summit. It was hoped that the summit would culminate a push by the small Baltic state Lithuania, which currently holds the Council presidency, to build closer ties with the European Union’s Eastern neighbours, particularly Ukraine. The EU’s largest neighbour was set to sign an ambitious association agreement and free trade deal; instead, it seems the summit will be little more than a photo opportunity. Hesitant to ruffle feathers in Moscow, Europe has all but called off the deal with Ukraine?

Officially, Western capitals maintain that the Ukraine deal has stalled because the two sides could not come to a solution on the fate of former Prime Minister Yulia Tymoshenko. Ms. Tymoshenko was convicted by a Ukrainian court in October 2011 of abuse of power and handed a seven year sentence. The conviction stems from controversial negotiations between the Russian gas and oil giant Gazprom and Naftogaz Ukrainy, its Ukrainian counterpart, over purchase and transit fees.

Europe saw political motives in the jailing of the former prime minister, who is currently the most well placed politician to take on the country’s sitting president, Viktor Yanukovych, in the next presidential elections slated for 2015. Tymoshenko also benefits from close ties with several European heads of state, most notably Germany’s Chancellor Angela Merkel, and an international support network. Her opponents, however, maintain that the Tymoshenko’s trial was not politically motivated and point to her murky political past.

During the 1990’s, the former head of government was implicated in the trafficking of enormous quantities of stolen gas and bribery of top government officials while president of Ukraine’s natural gas trading company United Energy Systems of Ukraine, the principal importer of Russian gas at the time. While plenty of corrupt Ukrainian politicians have gone unpunished for their crimes, the argument goes, it does not make Tymoshenko’s conviction less valid.

Ukraine has desperately sought to find a way out of the impasse over the past weeks. President Viktor Yanukovych, is willing to let Tymoshenko leave the country for medical treatment, but has said he won’t let her “evade criminal responsibility,” meaning she would be expected to return to Ukraine after treatment to continue serving the sentence. Tymoshenko’s allies, however, are refusing to accept anything short of a full pardon, which would also lift the prohibition on her return to politics. With only two weeks left before the summit, analysts see little room for negotiation on such a polarising issue in Ukrainian society.

The question of Tymoshenko’s release only gradually and quietly became a ‘make or break’ issue for Ukraine’s trade deal with the EU, while other legitimate demands to reform the political and economic system were watered down. Behind the emergence of the Tymoshenko question as final arbiter of Ukraine’s fate is the increasing belligerence of Russia, leaving many Western capitals fearful of a winter gas crisis similar to that of 2009.

Russia has increasingly turned up the pressure on Ukraine and its ex-Soviet neighbours in Eastern Europe over the past several months. Russian President Vladimir Putin would prefer that Ukraine join its own competing Eurasian Customs Union, in which membership is incompatible with a European free trade deal Russian authorities insist. The trade bloc is designed as a geopolitical counterweight to the ever-expanding EU, and is only the latest in a long line of failed neoimperial projects that began with the Commonwealth of Independent States in the early 1990s.

In an attempt to keep Ukraine out of Europe’s arms, Russia launched a mini-trade war over the summer that brought the cross-border flow of goods between the two countries to a complete halt. The Kremlin has also leveraged its neighbour’s energy dependence by threatening to jack up gas prices or even cut off supplies. Ukraine’s neighbours have faced similar treatment. The small Eastern European republic of Moldova saw its wine exports, a key industry for the country, banned from entering the Russian market based on shaky sanitary grounds.

Threats have not only been aimed at the Russian trade bloc’s unwilling candidates. Deputy chairman of state-owned Gazprom, Vitaly Markelov, told press in an emailed statement yesterday that there may not be enough gas to meet the demand of European customers in the coming winter. Ukrainian reserves are low as the country is currently embroiled in a dispute with Russia over the exorbitant price it pays for gas, almost double what German importers fork over. The Kremlin has said that Gazprom would cut prices significantly if the country gave up hopes for a trade deal with Europe.

Europe is right to worry about marginalising Putin, who has viewed the steady encroachment of the EU and NATO into Russia’s former sphere of influence over the past decade with alarm. The EU has little to gain from even worse relations with their most important neighbour. Ukraine, however, should not be thrown under the bus to avoid a gas crisis. The country has steadily moved towards Europe since independence and its political elite have expressed a clear wish to further pursue ties with Europe. By giving up on Ukraine, Europe will send a clear message to its neighbours: we won’t stand up to Russia.