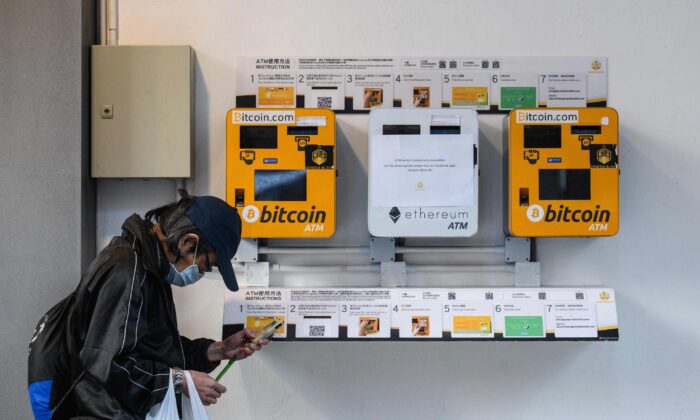 A man uses his phone as he walks past ATM machines (L and R) for digital currency Bitcoin in Hong Kong on Dec. 18, 2017. (Anthony Wallace/AFP via Getty Images)
Thinking About China

Is Coronavirus Pushing Beijing to Cryptocurrency ‘With Chinese Characteristics’?

Digital currency may help reduce the spread of deadly coronavirus

For years, cryptocurrency evangelists have been hyping bitcoin and other cryptos and blockchain technology as the greatest invention since electricity or the internet.

The advantages of instantaneous, anonymous, and unlimited numbers of transactions from anywhere in the world that digital currencies make possible are, without doubt, potentially world-changing.

But central banks haven’t shared that enthusiasm, nor have police states such as China. In fact, banking authorities around the world have delayed, denied, or debunked any plans to add “cryptos,” and for a variety of very rational reasons.

It’s worth recalling that the original idea behind bitcoin, the world’s first digital currency that debuted in 2009, was to create a currency that wouldn’t be subject to the abuse or manipulation by central banks. It was the central banks’ irresponsible monetary policies such as junk mortgages that triggered the Global Financial Crisis of 2008–2009.

As virtual cash that leverages distributed ledger technology (DLT), also known as blockchain technology, cryptocurrencies allow for anonymous transactions to occur exclusively over the internet on a global scale. With enough acceptance around the world, digital currency users would have little use for conventional currencies. They wouldn’t be paying taxes on their anonymous earnings, either.

These aspects greatly reduce the costs and frictions of international transactions. But at the same time, cryptos typically remain a threat to central banks’ control over their currencies as well as a nation’s taxing authority. In other words, the instant, untraceable, and unmanaged financial transactions that are at the very heart of cryptocurrencies all pose direct threats to the sovereignty and financial stability of every nation on the planet.

But with the rising COVID-19 outbreak in China, all that may be about to change.

Under the current outbreak crisis, the concern is that infected yuan banknotes will make containing the virus even more difficult. Therefore, China’s banking authorities in Guangzhou are incinerating billions of dollars’ worth of yuan from hospitals, farmers markets, and buses, and issuing new notes.

In fact, according to the deputy governor of China’s central bank, up to 600 billion yuan ($85.6 billion) have been issued just since Jan. 17.

But with the capability of the virus survival of at least nine hours outside a host at room temperature, replacing one vector for another won’t solve the transmission of the virus problem. Somebody has to collect the cash, and distribute the new cash—it’s a half-measure at best. It’s neither efficient, nor very safe.

Transitioning to digital currency, however, could eliminate cash as a vector of transmitting the disease from one person to another. But the coronavirus outbreak is actually not the original reason for China preparing to issue its own digital currency. Rather, it’s Beijing’s need to control capital movements in and out of China. That includes significant levels of illegal cash flows, often enabled by new digital payment technologies, which have driven China to create its own digital currency with “Chinese characteristics.”

In fact, according to a Reuters article from Nov. 1, 2019, China has been working on its Digital Currency Electronic Payment (DCEP) program over the past five years and will introduce it into China’s economy “as soon as possible.”

When issued, DCEP, would be different than current digital currencies in a number of ways. It would leverage blockchain technology, but the blockchain wouldn’t be distributed across the internet, just within China’s closed internet, behind the great firewall. This would likely eliminate lag time that comes from external validation, making it efficient and insulated from foreign influence.

DCEP’s value would be set by Beijing, unlike bitcoin and many other cryptos that rely on decentralized mining for the creation of additional money supply and determination of value, according to Shanghai-based consultant Terry Liu, CEO of VoneChain Technology. Just like the paper yuan today, the DCEP would be distributed via banks throughout China’s financial system, and carefully controlled by Beijing.

That will enable the Chinese Communist Party (CCP) leadership to have complete oversight over its capital and all transactions.

What would China’s economy look like if it transitioned to a digital yuan? It may not be the solution that Beijing hopes it would be.

It would certainly trigger a bigger stampede than there already is for folks to get their money out of China. That, in itself, could be the last straw.

It would certainly dampen the incentive and ability to build private wealth in China. What would stop the Party from appropriating any successful business from its owners? That already happens today; complete financial transparency would enable the Party to steal more efficiently.

It could also discourage direct foreign investment. How many Western businesses want every transaction scrutinized by Party officials more than they already are? How much in added costs would have to be added to grease the skids every year? That’s one of the reasons Western firms have been leaving China over the past several years.

What’s more, among the millions of small businesses throughout China, full government transparency over all transactions could bring down the shadow financial economy upon which most of China’s small businesses rely. That’s because graft-based economies need ambiguity to survive. The unseen cash payoff, the endemic bribery to get a sale, the entrenched theft that the Party engages in at the highest levels of government may all be eliminated.

Every Option on the Table?

All that said, my own personal speculation is that what may evolve are two distinct digital monetary systems—one for the masses, the other for the Party. That remains to be seen.

What is known is that China dedicated years to develop its own digital currency prior to the deadly outbreak it’s now fighting. Will this terrible event push China to pulling the trigger on the digital yuan?

That may well be. Given the severity of the outbreak, one would assume that most options are on the table.